Iron Man, the billionaire scientist and megalomaniac. Thor, the god of relaxed, worldly demeanor. Captain America, the displaced supersoldier in the present. Black Widow, the Russian super-spy of dubious loyalty. Many of you know these characters from the movies, but the truth is that recent movies owe a lot to The Ultimates, a title that had three volumes in an alternative Earth by Marvel Comics; and reinvented the Avengers for the 21st century. The importance of this material in the concepts behind Marvel’s superhero films is immense; and to this day he directs his cinematographic universe.

Released between 2002 and 2007, the work of Britons Mark Millar and Bryan Hitch was part of a then new universe created by Marvel called Ultimate — Earth-1610. The proposal was to tell from scratch the origin and first adventures of the main characters of the publisher, under a context and narrative that flirted with the action blockbusters of the time; but in a line of magazines apart from the publisher’s chronology, which already accumulated decades of life. Thus, it could attract new readers while presenting alternative updated perspectives for longtime fans.

The new universe began with its own magazines for some of Marvel’s top heroes: Spider-Man, X-Men and Fantastic Four. But it was the Ultimates, that is, the Avengers of Millar and Hitch, who changed the game and turned the paper pages into veritable scenes from a blockbuster movie.

The first 13-part arc begins with a recap of Captain America’s World War II performance, but the hero disappears into the sea. The following editions present the other heroes of the group: Iron Man, Giant (Hank Pym), Wasp, Thor, Hulk, Scarlet Witch, Mercury, Hawkeye and Black Widow, in addition to his mentor, agent Nick Fury. We found that the Captain was revived after being unfrozen; and the group must face the alien race Chitauri, who manage to change form and, infiltrated among humans, plotted a plan to dominate the Earth. 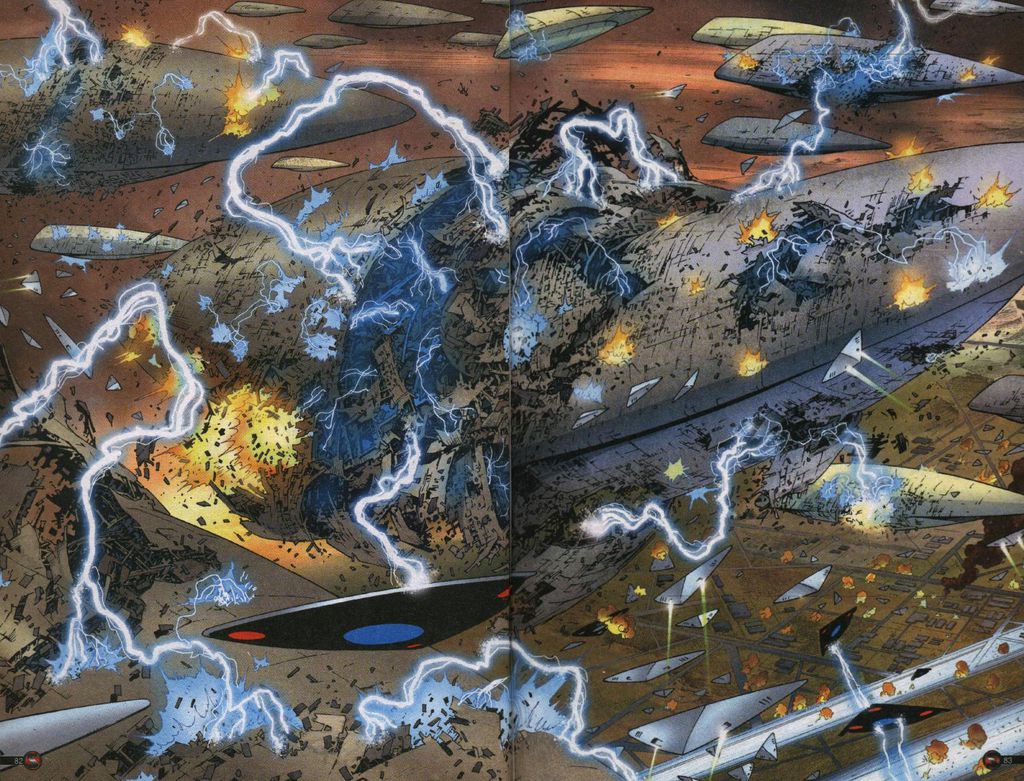 Scene from The Supremes (Image: Reproduction/Marvel)

What caught the attention at the time was the deft way in which Millar “remixed” the early years of original stories from the Avengers chronology into a plot that dialogued with the aesthetics and narrative of recent blockbusters in cinema at the time, such as Independence Day, Mission Impossible and Matrix. Bryan Hitch’s grandiose, realistic and detailed art was also highlighted, demonstrating mastery of the shots used in the films and deftly transposing them to the pages of history, complete with gigantic action scenes in the final two editions.

Also noteworthy is Millar’s approach to the characters, taking a bit of the heroic and virtuous veneer of their canonical versions and putting more edges on their behavior, as well as updating their looks.

Captain America, who has always been Marvel’s moral compass, still retains his great daring in battle and leadership skills, but proves to be a guy with very conservative values ​​and questionable methods for achieving victory — after all, he is, above all. everything, a soldier in a war, who kills. For example, this Steve Rogers tells the Hulk that a shape-shifting villain was “tracing Betty” [Ross,a amada do alter-ego do monstro, Bruce Banner], who responds with murderous fury and rips the alien’s head off. 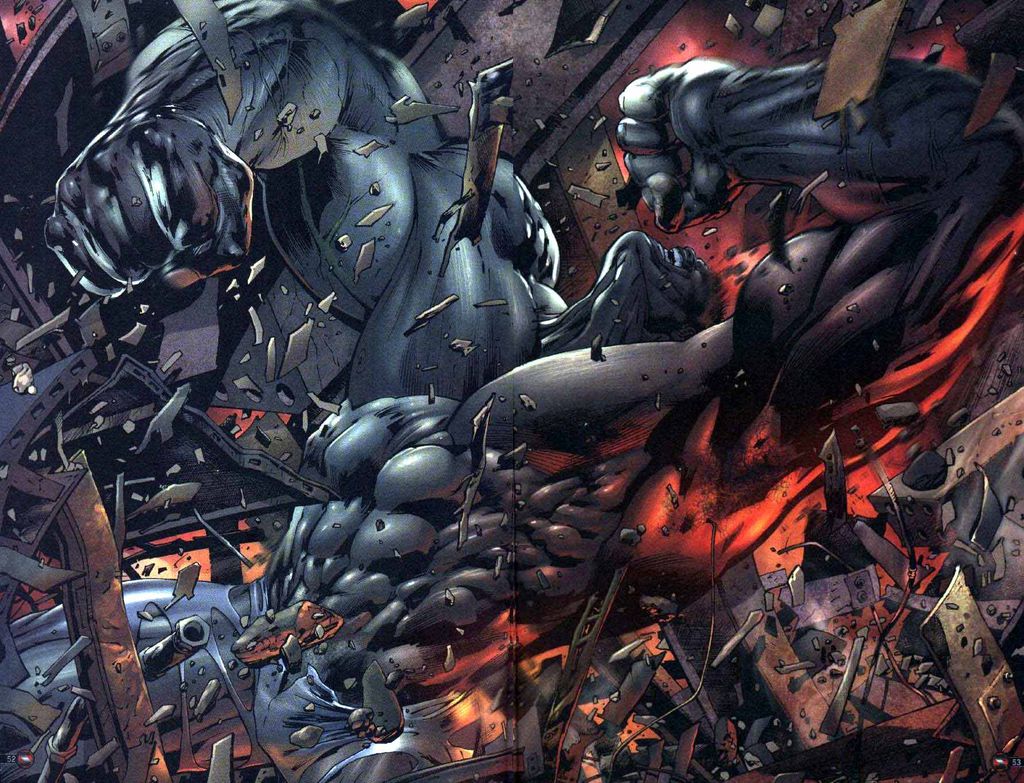 Hulk in a scene from The Supremes (Image: Reproduction/Marvel)

Banner, by the way, had his well-known inferiority complex quite accentuated here. At an important moment in history, he again injects himself with an attempt at Supersoldier’s Serum (an incomplete reproduction, produced with a blood sample from Captain America). He turns into the Hulk after being ridiculed by his fellow Avengers — in the Avengers movie you can see the influence of that. The first time Mark Ruffalo’s Emerald Giant sees Rogers, he gets a look of wonder; and it is worth remembering that the Captain is the only one whom the creature obeys throughout the entire plot of the film.

Hank Pym the Giant also has his neuroses and even commands an attack of ants, which seriously injures the Wasp – all because of her jealousy and her possible interest in the Captain. Thor is portrayed as a neo-hippie and drunkard protesting the World Economic Forum; and Iron Man is one of the least changed, as Tony Stark remains the ultra-genius playboy ever, but of course, with a little more self-centeredness and hedonism than his “normal” in the traditional Marvel universe.

The message Millar and Hitch wanted to give fans new and old was: yes, they are essentially still the Avengers we know, but don’t expect the “good-guy” from them before. The story still had some sub-themes that spoke with the political tone of the time, such as George W. Bush’s USA sending its troops to the Middle East. The sequel, Ultimates Vol. 2, published from 2005 to 2007, featured Loki as the current supervillain — a bow to the Avengers’ 1963 debut — leading an army of meta-humans called The Liberators.

Millar has a career marked by stories that deconstruct and “adultize” the superhero genre, whether in Marvel and DC or with their own characters, such as KIck-Ass, Civil War, Authority, Superman: Between the Scythe and the Hammer and Wolverine: Old Logan. The Supremes were the epitome of his style and received general public and critical acclaim, albeit with moderate criticism of the cynicism and aggressiveness of the story’s tone.

In 2008, after the original creative duo lacked interest in continuing to work with the Supremes, Marvel nevertheless ordered a 3 volume, leaving it in the hands of writer Jeph Loeb and artist Joe Madureira. It sold less than the previous two bows and received far more negative reviews. Loeb even signed the Ultimatum crossover, which was even more frowned upon, with a series of deaths and gratuitous violence even more pronounced than the Millar and Hitch phase.

But the sad ending does not erase the merits of the Supremes’ golden stage, which, as we could see, served as a “conceptual bible” for Marvel’s Cinematographic Universe films from 2008 until now, albeit with a lighter approach than its matrix. Chris Hemsworth’s swashbuckling Thor, the wry and resourceful Tony Stark of Robert Downey Jr. and the casting of Samuel L. Jackson as Nick Fury are just a few examples of how art imitated art, as they were all already there in the HQ years before they migrated to the big screen. Relying only on the comic book community, the work stands as a parameter that there are no limits to what good artists can do on paper in terms of scale and narrative of action.

The first two arches of Supremos were originally published by Editora Abril, but were bound by Panini and can be purchased relatively easily at the publisher’s online store (R$122 vol.1, and R$173.90 vol. 2) . It is also available at a discount from Magalu and other retailers.

Records after India England match: Five big records made by India’s defeat, the match lost by an innings margin for the 45th time

Twin Brothers Sequel will have Tracy Morgan as lost brother

How to Create Quick Custom Commands in Bixby