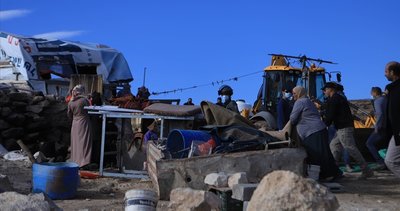 “I HAVE NEVER EXPERIENCED A MORE DIFFICULT MOMENT IN MY LIFE”

Yahya Delal, the owner of the houses, told Vadi Hilve Information Center, “I am 67 years old. I demolished my four sons’ houses with my own hands. I have never experienced a more difficult time in my life.” said.

In occupied East Jerusalem, the Israeli authorities have been threatening to demolish thousands of Palestinian houses on the grounds that they are “unlicensed”.

Palestinian sources report that more than 5,000 Palestinian homes have been demolished by Israeli forces in East Jerusalem since 1967.

According to a report by the UN Office for the Coordination of Humanitarian Affairs, Israeli authorities demolished dozens of homes in East Jerusalem in 2020 on the grounds that they were “unlicensed”. Dozens of Palestinians were left homeless due to the demolitions.

Stating that the said practice of the Israeli municipality has no legal basis, the Palestinians say that it is “part of Israel’s policies of intimidation and Judaizing the city.”

The Israeli municipality often collects the demolition costs from the people whose houses were demolished.

Gamescom | Sea of ​​Thieves will receive content from Borderlands