Another Saturday arrived. So, how about starting the weekend by checking out NASA’s latest selection of beautiful astronomical images?

In this week’s photos, you will find some interesting and curious phenomena, ranging from the transit of the moons Europa, Ganymede and Callisto making a quick pass in front of Jupiter, to some simulations that show what changes in the gravity of different objects in the System Solar in a very practical way. You can also check a photo of the so-called “Blue Moon”, which, despite its name, does not show our natural satellite in bluish tones.

Here, we have a composite of images of Jupiter taken on the 15th of August, observed in Cebu City, Philippines. That day, the astrophotographer was able to record not just a single transit of a single moon, but a triple transit of some of the gas giant’s natural satellites. The largest planet in the Solar System is orbited by 80 moons; the four largest of them—which are also some of the largest in our entire neighborhood—are Io, Europa, Ganymede, and Callisto, also known as the “Galilean moons” after Galileo Galilei, who first saw them in 1610.

The photos above show a sequence of passages of these moons. In the upper panel image, the moon Io disappears into the planet’s shadow on the right side, while Europa, Ganymede, and Callisto move along the lighted side of Jupiter. Europa and Ganymede appear on the left side, casting their shadows on the gas giant’s upper clouds, and Callisto is on the lower right side of the photo. Then, in the central panels, we see the three moons making a triple transit across the face of Jupiter. The shadows of Europa and Ganymede are still visible, but Ganymede appears to have passed Europa ahead. In the lower panel, the Jovian moons can be seen in an eclipse, while Ganymede’s shadow continues to cover the moon Europa.

Sunday (22) — The Explosion of a Binary Star 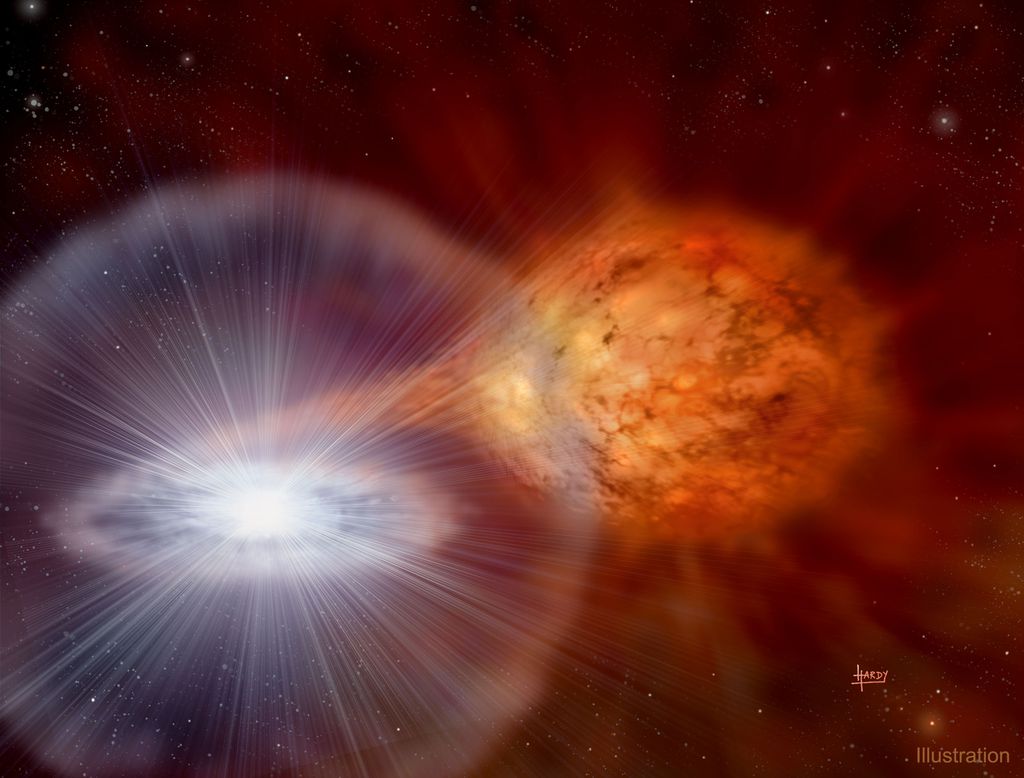 About 5,000 light-years from Earth, in the constellation Ophiuchus the Serpentarium, is the binary star RS Ophiuchi, formed by a red giant star and a white dwarf. At approximately 20-year intervals, the system’s red giant transfers so much hydrogen to the nearby white dwarf that it eventually explodes in nova, a powerful explosion that can spew matter into space at a speed of 2600 km/s. The illustration above represents exactly this process, with the red giant on the right and the white dwarf in the very center of the accretion disk, formed by matter moving towards it.

The most recent system explosion happened during the beginning of the month of August. It can be observed in different places around the world and was initially identified by amateur astronomer Alexandre Amorim. As this process of explosion in nova is repeated from time to time, the system is considered a “new recurrent”, but this behavior will not last forever. Astronomers speculate that within the next 100,000 years, the white dwarf will have “stolen” so much matter from its neighbor that it will exceed the so-called Chandrasekhar Limit. Then, when that happens, it will become so unstable that it will explode in a supernova, putting an end to the binary system.

Monday (23) — Gravitational lens and a cluster of galaxies 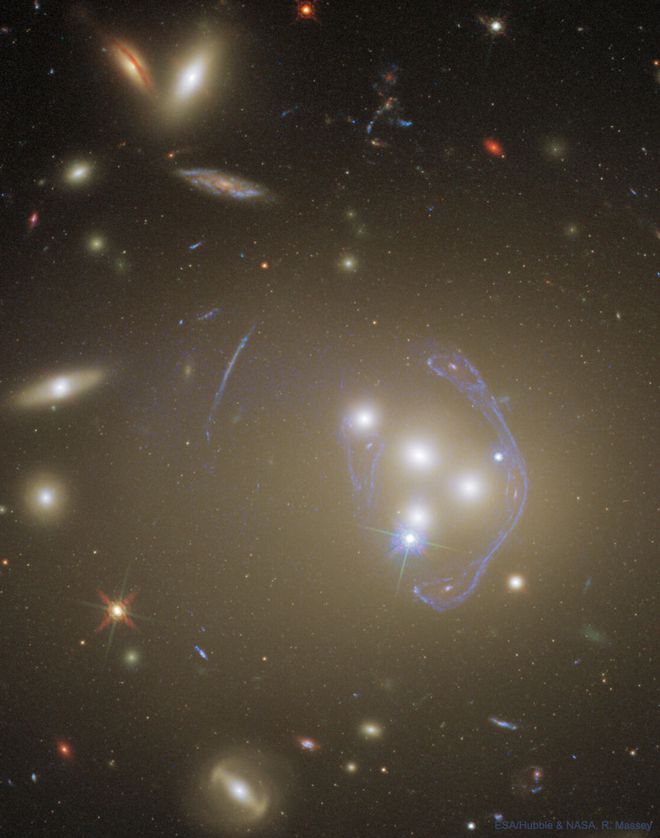 This image of the Abell 3827 galaxy cluster was taken with the Hubble telescope and shows a formation so far away from us that light left it 1.3 billion years ago, when there weren’t even dinosaurs on Earth. The telescope observed this formation to study one of the greatest mysteries for cosmologists today: dark matter, which represents about 27% of the universe and cannot be seen.

In addition, this cluster also attracts attention due to an interesting phenomenon — look at the center of the image and you’ll find something that looks like a curved blue galaxy, which appears to have three centers. In fact, what happens is that there is only one galaxy there; however, the light emitted by it follows multiple paths depending on the gravity of the cluster. As a result, a gravitational lens occurs. Today, it is likely that the cluster’s central galaxies have already integrated a large “cosmic feast” and merged, creating a single large galaxy. 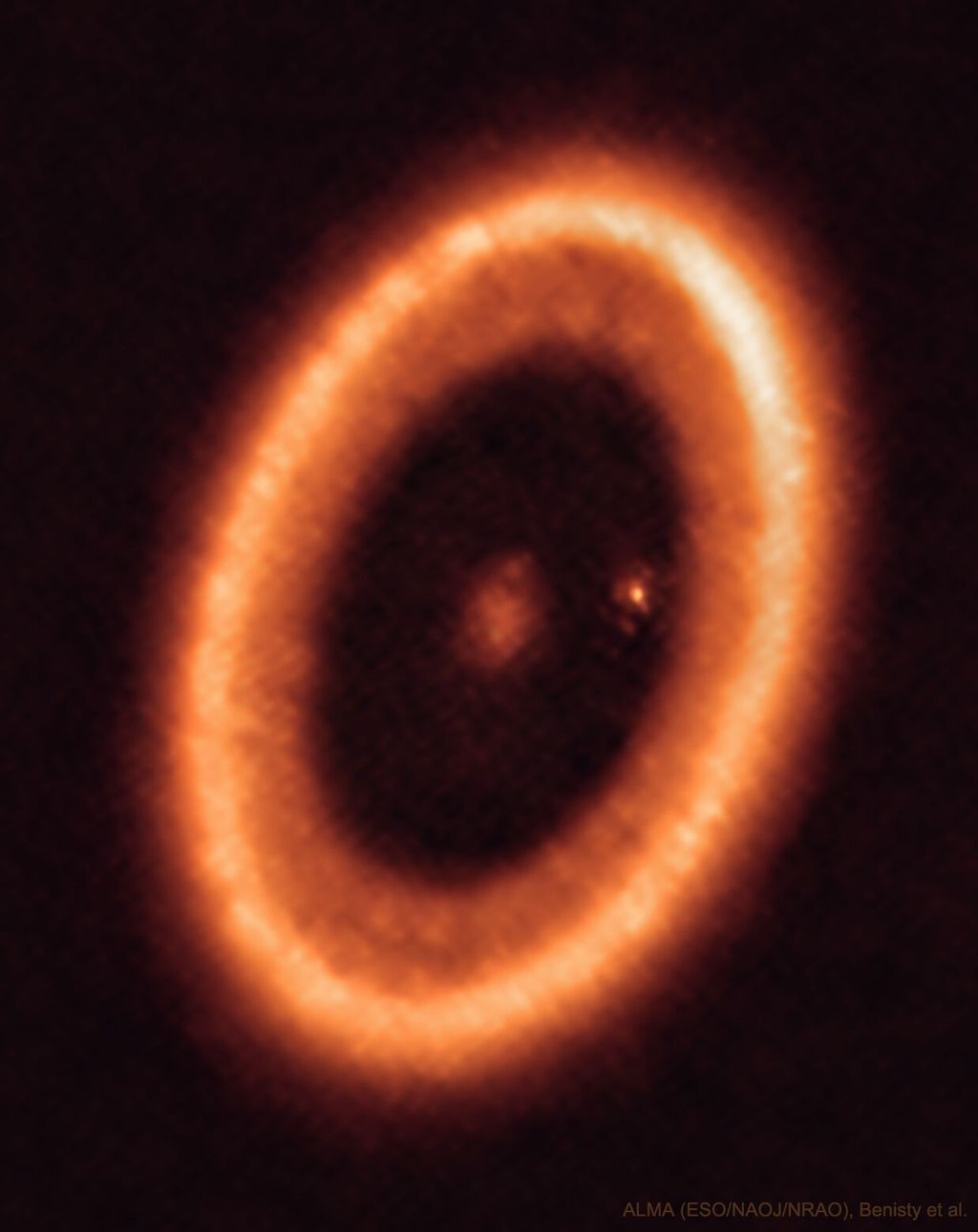 This record was made by the Atacama Large Millimeter Array (ALMA) observatory, formed by 66 radio telescopes spread across the Atacama Desert, in Chile, and shows the PDS 70 star in detail. Located towards the constellation Centaurus, the Centaur, it is about 400 light years from us and is surrounded by this large circumplanetary disk, which appears in the image above. However, what most surprised astronomers in this photo was not the large disc, but the smaller and more diffused one, present farther to the right of the inner part of the larger disc.

The star in question is orbited by at least two other planets. One is PDS 70c, a giant gas exoplanet that has a mass twice that of Jupiter. The most curious thing is that this planet is surrounded by this circumplanetary disk, whose size reaches the average distance between the Earth and the Sun (that is, about 149 million kilometers) and has enough mass to form three new moons about the size of the from ours, which reaches 3,400 km in diameter.

Wednesday (25) — How is gravity in the Solar System 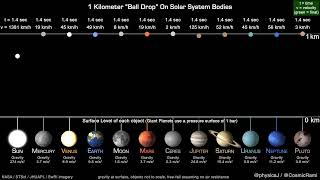 Imagine that you could throw a ball at an altitude of 1 km across different worlds of the Solar System. Where would the ball fall faster: on Earth, on Jupiter or on Uranus? If the answer is difficult, the animation above illustrates exactly this experiment, without considering the air resistance. You will notice that, as a result, the marble’s rate of fall changes according to gravity, the force with which a body attracts objects towards its center. Everything that has mass has gravity; therefore, more massive objects exert greater gravity.

As the gravitational force also depends on the distance to the center of gravity of the object in question, shorter distances would make the imaginary ball fall faster. That’s why the video shows some curious results. For example, although Uranus is 14 times more massive than our planet, this icy planet attracts the ball more slowly than Earth because it is so much less dense. Already Jupiter, the largest gas giant in the Solar System, would attract the ball much faster than Earth and Uranus. 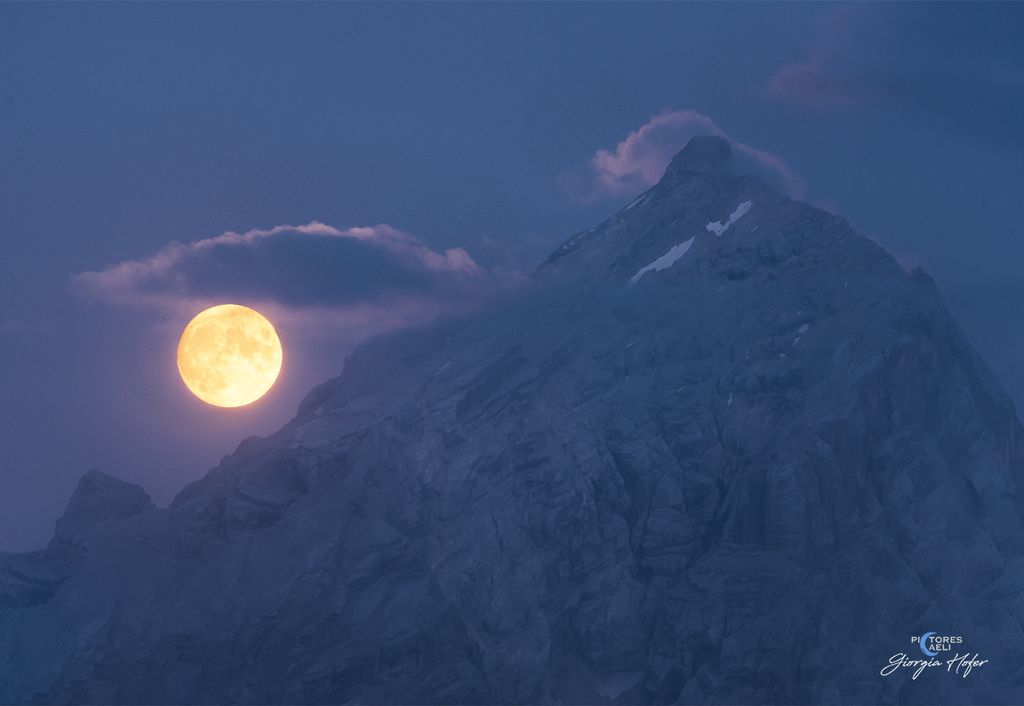 Just before sunrise or sunset, the environment is surrounded by bluish tones for about 20 minutes. The exact time of this lighting can vary by location, time of year and air quality, and this time is called the “blue time”. Well then, the blue time is one of the favorite moments of photographers who usually photograph the Moon, as its brightness is not so contrasting with the sky — and it was also the choice of the photographer responsible for this photo, who recorded the Moon almost full over the Italian Alps of the commune of Cortina d’Ampezzo.

The photo shows the Moon as it rose in the sky above the rocky pyramid of Monte Antelao, the peak that towers over the Alps. Because it was still low on the horizon, the moon was glowing yellowishly—but since this was the third full moon of a single season with four of them, it is nicknamed the “seasonal blue moon.” This phenomenon happens once every two and a half years, or at most three years. 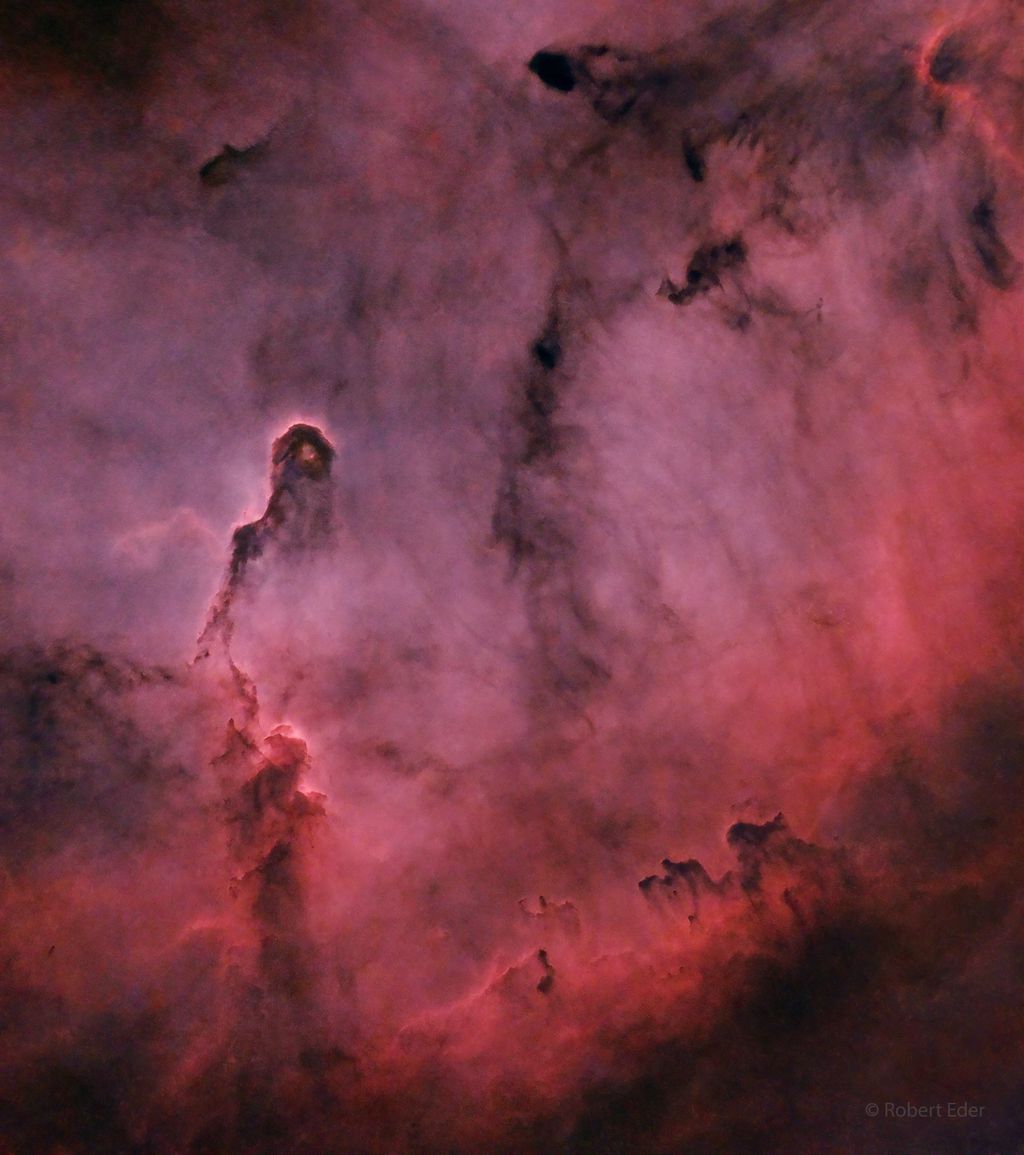 The nebula in the image above, formed by a large concentration of interstellar gas and dust, is known as the “Elephant’s Trunk” — and if you look at some of the shapes of it, that’s a pretty apt moniker, isn’t it? This “cosmic trunk” measures about 20 light-years across and is present amidst the IC 1396 star cluster, towards the constellation Cepheus, the Cepheus, about 2,400 light-years from us. Part of the nebula is quite bright due to a massive, luminous star, which is to the west of the cluster.

In case you are wondering about the lack of stars in this image, know that the absence of them is due to digital processing, which removed the visible stars that would be in it. On the other hand, that doesn’t mean that there aren’t other interesting formations there: for example, the dark areas, formed by interstellar dust and gas, have become even more evident. In addition, we also see some branched clouds, whose shapes can even resemble tentacles, which keep material inside to form new stars.