Google announced on the 17th the Pixel 5a 5G, the newest intermediary in the popular Pixel a line of affordable cell phones. Extremely similar to Pixel 4a 5G and Pixel 5, the novelty shares many of the specs with its predecessors, bringing with it a few point changes, such as larger battery capacity and slightly refined design, with thinner edges around the screen and more.

Already in the hands of some specialized vehicles, the device has been intensively tested and, among the benchmark batteries to which it is submitted, the model showed a very curious situation when facing the series of the SpeedTest G channel, affiliated to the Android Authority: facing the OnePlus Nord 2, another affordable phone in the same price range, Google’s device has shown that performance isn’t exactly its strong point.

Pixel 5a suffers serious defeat to Nord 2 in performance

Recapitulating the configurations of each device, the Pixel 5a 5G is equipped with Qualcomm Snapdragon 765G chipset, accompanied by 6GB of RAM and 128GB of storage. There’s also a 6.34-inch Full HD+ OLED screen with a 60Hz refresh rate, a dual camera with a 12.2MP main sensor and a 16MP ultrawide, in addition to its biggest highlight — the 4,680 mAh battery, the largest ever employed in a Pixel. 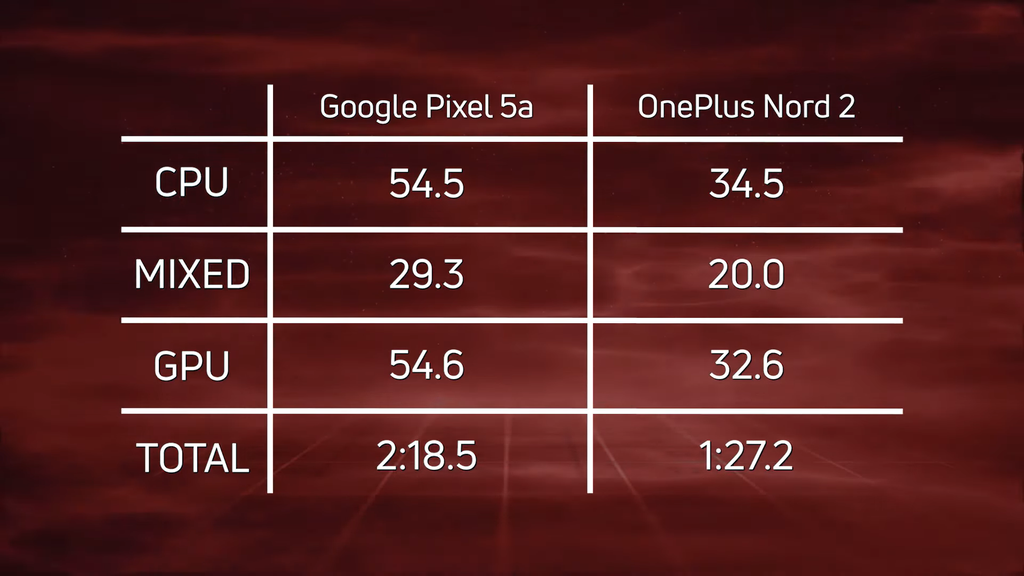 By checking the time, in seconds, of running each phase of the test battery, the Nord 2’s advantage over the Pixel 5a can reach 22 seconds (Image: SpeedTest G/YouTube)

The SpeedTest G test battery that the phones underwent is divided into three stages: one focused on CPU, one mixed and one focused on stressing the GPU. In all of them, the OnePlus Nord 2 opened a significant lead, ending the series in just over 1 minute and 27 seconds. In comparison, the Google device took 2 minutes and 18 seconds, more than 51 seconds longer.

Some test highlights go to multithreaded execution, which the Nord 2 transitioned with ease, and to GPU-focused tasks — in one of the tests, the OnePlus device managed to maintain a frame rate of 28 FPS, versus just 18 FPS from rival Google. 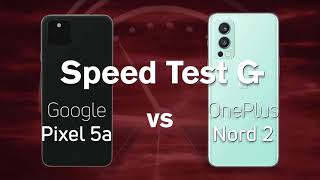 Users of the Pixel a family have always been subjected to some hardware sacrifices to get access to the highest quality camera and constant updates from Google without having to face high-end prices. The search giant’s focus has always been on fluidity and user experience, rather than raw processing power.

More powerful and with a more complete specification set, the OnePlus Nord 2 is an easy choice over the Pixel 5a (Image: Press/OnePlus)

Still, it’s hard to ignore the glaring difference in performance to the OnePlus Nord 2 due to the prices charged: while the Pixel 5a sells for $449, the OnePlus phone hit the market with prices starting at 399 euros, or 27,999 Indian Rupees, which converts to $470 and $380 respectively.

Even though it’s difficult to compare them directly due to taxes and currency differences, they’re both positioned in the same segment and still traded for similar values, making the Nord 2 an easy choice, offering superior display, clean software, more loading faster and significantly better performance.

How to unlink your Google account from apps and games