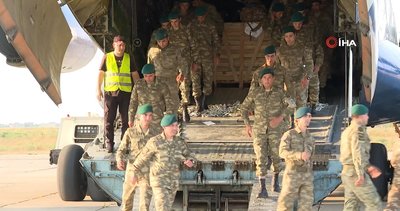 Evacuations from the capital Kabul continue after the Taliban took control of Afghanistan. The Azerbaijani peacekeepers, whose evacuation from Afghanistan began on August 26, were first brought from Kabul to Ankara and then to Baku, the capital of Azerbaijan. The plane carrying 120 soldiers landed at Gala Military Airport in Baku. While the soldiers were welcomed with an official ceremony at the airport, officials of the Ministry of Defense of Azerbaijan, families and relatives of the soldiers attended the meeting.

The Ministry of Defense of Azerbaijan announced that the Azerbaijani peacekeeping force, consisting of 120 people working at Kabul International Airport, was evacuated from Afghanistan at around 01.00 last night and brought to Ankara.

On the other hand, the Azerbaijani peacekeepers, while serving in Afghanistan since 2002, provided the security of Kabul International Airport in Afghanistan together with the Turkish Armed Forces.

Manned moon and asteroid missions could happen later this century