Researchers at the University of Utah, USA, have developed a new exoskeleton that promises people with amputated legs the ability to walk upright again. The system extends the residual limb, transforming the set into a complete robotic leg.

The device provides enough momentum to make walking more natural, making the user not need to expend extra energy just to take a step with what’s left of the leg that, in most cases, had several muscles removed during the amputation.

“A conventional prosthetic leg cannot fully replicate the biomechanical functions of a human leg. As a result, amputees above the knee have more difficulty walking, forcing the muscles of the residual limb and the intact limb to compensate for the lack of energy in the prosthesis. Our exoskeleton circumvents this problem”, explains professor of mechanical engineering Tommaso Lenzi.

The exoskeleton, which surrounds the user’s waist and leg, has electric motors powered by a long-lasting battery. Integrated processors control all mechanical components, helping to maintain a more stable and less passive gait than a normal prosthesis. 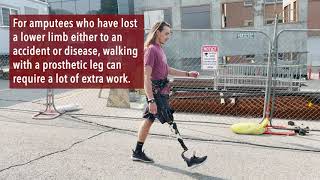 Custom electronic systems, microcontrollers and built-in sensors work together with advanced algorithms so that the amputee can walk with much less effort. In addition to restoring the ability to walk, the robotic leg increases the quality of movements.

“The artificial intelligence of the exoskeleton understands how the person moves and helps in the way he performs this movement. The mechanical actuator can be swapped between the right and left sides of the main electronic harness to accommodate either leg,” adds Lenzi.

The researchers tested the exoskeleton in six volunteers with above-the-knee amputations. During the experiment, they all recorded an improvement in metabolic rate when walking on a treadmill, with a reduction in energy consumption around ,6% after one hour of physical exercise.

Scheme of operation and tests with the robotic leg (Image: Reproduction/University of Utah)517045

Among the volunteers was businessman Stan Schaar from 15 years, who lost his left leg in an accident while helping a neighbor repair a pickup truck seven years ago. “The first time I used the exoskeleton it was as if my muscles were fully fused with the device. It was helping me to move much faster and I could walk for miles without getting tired,” says Schaar.

Another advantage of the robotic leg is that it is made of a fiber material carbon, with some secondary plastic and aluminum parts. This set makes the entire structure of the exoskeleton extremely light and compact, weighing just over 2 kg after being assembled.

“I am a person who does not have many muscles left in my residual limb. This device makes up for a lot of what they had to take away. There’s nothing to replace a flesh-and-blood leg, but the exoskeleton comes pretty close. I hope they will put this on the market as soon as possible”, concludes Stan Schaar.

Pfizer announces results on effectiveness of its booster dose

How to Put Videos in Keynote Presentations (iPhone, iPad, and Mac)