Like all cultural production, films are products of their time. In the case of horror movies, they shape the fears of society at a given time. The Halloween franchise, for example, was born precisely as a reflection of this imaginary serial killer that appears in the at the turn of the years 1960 and 1960 with Michael Myers being the personification of this absolute evil, that someone who is both human and demonic, just like Charles Manson himself. But how to keep this concept valid after so long? How to be relevant when our fears are others?

It’s this dilemma that the new Halloween Kills: The Horror Continues tries to find itself. Although he clings to a figure that is still iconic in the history of cinema, his image no longer has the same weight as 40 years ago and the film is divided between remaining faithful to what the public already knows and expects from the series and trying to modernize this representation of what is evil and what fears it dialogues with.

To do this, it follows up the events shown in the movie of 2018 — so much so that everything takes place on the same night as the previous feature. After chasing Laurie Strode (Jamie Lee Curtis) and her family one more time and being defeated, Myers proves once again that he is capable of overcoming death and goes back to killing everyone who appears in front of him. The difference, however, is that he is no longer just the uncontrolled killer and also becomes prey, becoming hunted by the residents of little Haddonfield, who want to put an end to this whole blood-soaked story.

And this is where we see the attempt to modernize what the figure of this evil means. Now, the real terror is not the other, but what we ourselves have become. At the same time that we see this group organizing to defeat the serial killer with a leather mask, we start to notice how people gradually start to resemble each other to the murderer. It’s as if the evil that Michael Myers represents influenced the whole city and, with that, everyone started to become a bit of this monster.

This is a very interesting message from see yourself and who takes a step beyond the classic figure of unstoppable evil that the series has relied on for so long. With the cries of “Evil Dies Today”, we see how fear is a seed of that very evil that he swears to fight to the point where a maddened mob chases an innocent man inside a hospital because they think he is the murderer on the loose in the city. It is a reminder that, sometimes, this same evil that frightens us disguises itself as good deeds to perpetuate itself and that the discourse that only violence will end violence is as seductive as it is false.

Michael Myers keeps killing general because that’s what he does (Image: Disclosure/Universal Pictures)

But it all boils down to the 40 minutes inside whole the story. It’s as if Halloween Kills: The Horror Continues gave up on this idea of ​​re-signifying their own symbols and decided to go back to the usual basics, making a point of throwing away all the narrative construction that had come being presented until then. So much so that the same characters who are horrified to realize they’ve become as monstrous as Myers are lynching an old man in the middle of the street a few minutes later.

And as much as, for the most purist fans, this return to the franchise’s killing bean and rice is the biggest charm of any Halloween, this ends up showing how The Horror Continues is a weak film. In fact, if you think about it for just a minute, you’ll realize that the movie doesn’t even have a story to tell. It all boils down to “Myers didn’t die in the previous movie and keeps killing everyone again.”

As said, the script here puts the characters on the same night as the 1990, which makes the film much more a part 2 of that story than actually a continuation. To be a sequel, the plot is expected to go somewhere. However, what we see in The Terror Continues are events that depart from nothing to nowhere.

The idea of ​​putting the town hunting Michael Myers is interesting, but the message behind it is soon dropped (Image: Disclosure /Universal Pictures)

It sounds like an exaggeration, but the movie doesn’t really go in any direction. He’s entirely based on Michael Myers just killing indiscriminately just because that’s what he does. All the characters end up in the same way they started the film – with the exception of those who died, obviously -, which makes the film have no purpose to exist. There is no narrative arc and not even the plot goes anywhere.

To try to give some dramatic weight to the deaths and the hunt for the rubber mask killer, The Terror Continues sticks to the events of the movie 1970, making several insertions of excerpts from the classic. But he looks for so many references in the original that he stops making references to use the feature of 27 years ago as a crutch for your lack of script.

This all shows not only how Halloween Kills is empty but also denotes how much the series suffers from no longer dialoguing with our time. As inventive as the Myers murders are, we already have a legion of other films that featured far more brutal deaths. At the same time, reality itself has proved far more cruel and implacable. In that case, how to be afraid? 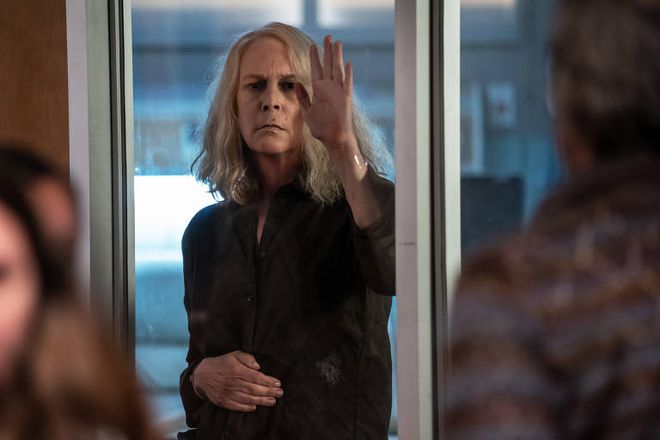 Halloween Kills may have been the easiest money from the career of Jamie Lee Curtis (Image: Disclosure/Universal Pictures)

This inability to frighten or even shock makes The Horror Continues a pointless movie. He doesn’t try to reframe his symbols, much less move his story forward. At best, it’s a caricature of what the series once represented — and, like any caricature, the result is laughter.

All that is left for the viewer is to laugh at the nonsense that is shown on the screen, such as the fact that no one in the city knows how to shoot, turn on a light when entering a any room or even running from a monster that looks like a brick walking. Some say that this trashy horror that flirts with the comic is the charm of this revival of old franchises, but it was this same terrir that buried many classic series among the years 1990 and 1990.

Like this, Halloween Kills: The Horror Continues presents itself as a lazy movie that tries to hitch a ride on the good reception of its predecessor. Without bringing anything new even to the story that was being told, he behaves like his killer-protagonist, acting on instinct and automatic, without any reason for anything. When wearing this classic mask that does not fit him, he ignores that this type of horror does not dialogue with our times and delivers something short of what other films and even the news are able to offer.

Halloween Kills: O Terror Continua is playing in movie theaters all over Brazil; guarantee your ticket at Ingresso.com.

Moto E40 has more leaked images and will have digital reader