In an edition of the Olympic Games marked by the pandemic and with an absence of the public, fake websites that promise to broadcast the competition became the most present threat, even above any attacks against the organization of the event and international sporting committees. The focus is on obtaining financial data or installing malware that displays inappropriate advertisements to users, whose income goes into the criminals’ pocket.

According to a report by security firm Zscaler’s threat lab, new domains, not linked to previous fake sports streaming sites, were used to lure victims. The design, however, is the same as what experts have seen in other attempts in this category, with only images related to the Tokyo Olympics, as well as logos and other visual materials, being used to enhance the appearance of legitimacy. 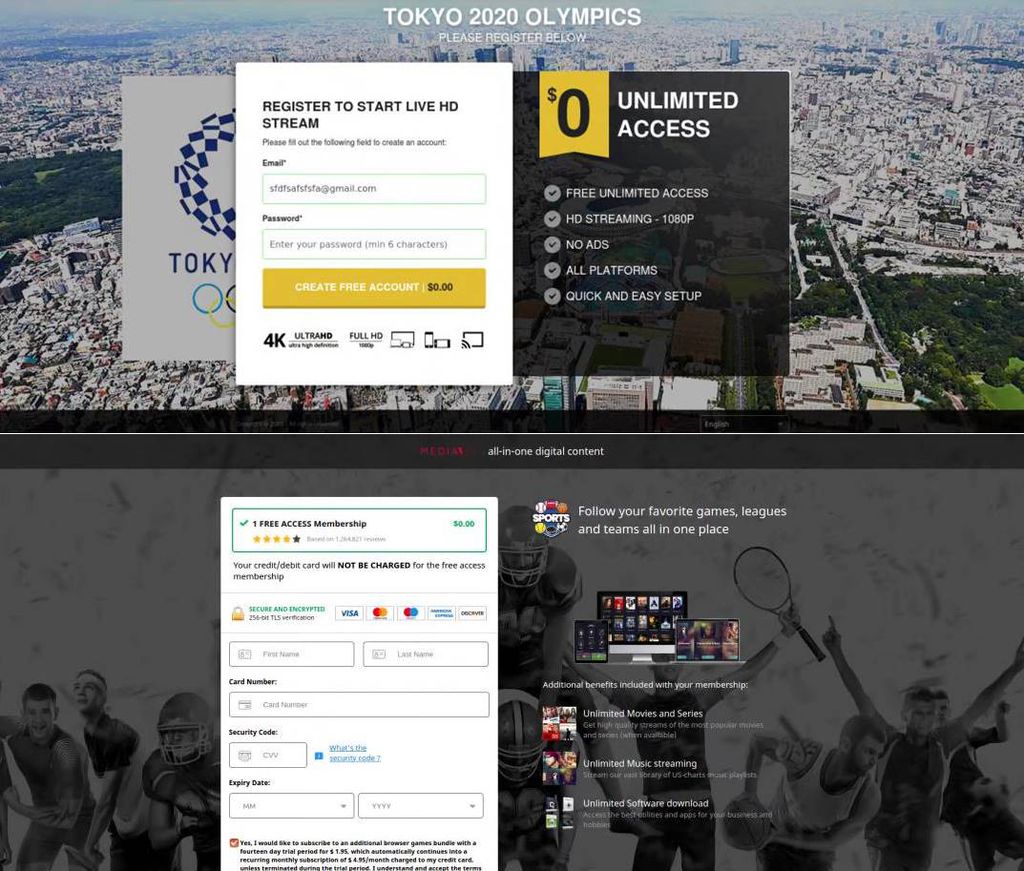 Fraudulent sites promise free streaming of the Olympic Games, but ask for credit card information which then leads to fraud (Image: Playback/Zscaler)

The offer, as always, is free transmission of competitions in high definition and on any device. However, for access, the services require registration and also the entry of payment information, in the name of a false validation when, in reality, the data is stored by the scammers for use in fraud and improper charges.

In a second very common case, malicious browser extensions are used as a necessary requirement to watch the games. On a page that simulates the appearance of the Mega hosting service, the download is offered and, in case of installation, it includes advertisements where they shouldn’t be, in addition to replacing legitimate advertisements with those under the control of the bad guys. Adware, as they are called, generates income for criminals and can even obtain browsing history information.

Zscaler’s survey shows the United States as the country with the highest number of incidents, with 39% of occurrences, followed by Germany (8.6%) and France (8.3%). The fraudulent sites are mostly English-speaking, denoting an international focus for a threat that still lingers while the Tokyo Paralympics take place.

The main security recommendation is to avoid using illegal or suspicious streaming sites. Official platforms, usually, will make wide dissemination of this type of attraction, while sites that require credit cards or the download of specific solutions should be avoided, especially when they vehemently claim that they are free options.

The security company also drew attention to OlympicDestroyer, a malware that has been in activity since the 2018 Winter Olympics in South Korea, and even compromised the competition’s official website. The plague was once the subject of an alert by the FBI’s cyber division about the risk of denial of service and ransomware attacks against sponsors, involved companies and the competition itself, but what we saw was a steady movement of threats.

It’s not good news, after all, the threat remains persistent, but Zscaler’s numbers show stability in the flow of attacks using OlympicDestroyer. After peaks in mid-May, the number of detections remained stable and the expectation is that there will be a reduction until, at least, the next edition of the Olympics.

Google Keep gains a visual aligned with Material You on Android 12; see images