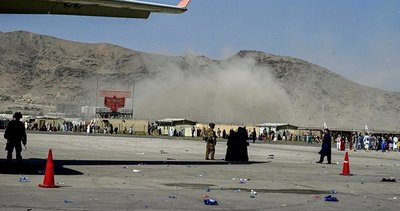 DO NOT TRAVEL TO KABUL AIRPORT FROM US State Department

In the wake of the bombings and rapidly changing security situation in Kabul, the US State Department warned people not to travel to the airport as there is an ongoing and high threat of terrorist attacks, warning that the situation is still “highly volatile” and that those in the airport area should “take shelter in a safe place immediately”. and to wait for more advice”.

“DESPITE THE ATTACKS, WE WILL CONTINUE evacuation”

British Prime Minister Boris Johnson, who held the emergency committee meeting (COBRA) after the explosions in the Hamid Karzai International Airport area, made statements about the situation in Afghanistan. Johnson stated that the UK will continue to evacuate from Afghanistan despite the “barbaric” terrorist attack in the airport area. Johnson said UK forces would not interrupt operations in response to these attacks.

CONDEMNATION FROM THE TALIBAN

In a statement, Taliban Spokesperson Zabihullah Mujahid condemned the double bomb attack in Afghanistan’s capital, Kabul, and stated that the explosions took place in an area controlled by the US army. “The Islamic Emirate pays great attention to the safety and protection of its people, and the evil circles will definitely be stopped,” said Mujahid.

22.45 United Nations (UN) Secretary General Antonio Guterres will meet with the representatives of the 5 permanent members of the UN Security Council (UNSC), USA, UK, France, China and Russia on Monday, 30 August to discuss the situation in Afghanistan.

“We are working very hard right now to determine who is associated with this cowardly attack and we are ready to take action against them, we are looking for them 24/7,” said CENTCOM Commander General Kenneth McKenzie at 22.25.

22.20 The terrorist organization DAESH, which made a statement on its social media account, claimed responsibility for the bomb attack in Kabul, the capital of Afghanistan.

According to the statement made by the Russian Ministry of Foreign Affairs at 22:00, Lavrov had a telephone conversation with Abdullahiyan.

In the statement, the two ministers especially discussed the current situation in Afghanistan, and emphasized that “Moscow and Tehran’s commitment to similar approaches, peaceful dialogue for Afghan political forces and the establishment of an inclusive government in Afghanistan” were emphasized.

21.40 The bilateral meeting between US President Joe Biden and Israeli Prime Minister Naftali Bennett, which was expected to be held at the White House today, was postponed to tomorrow due to the terrorist attacks in Kabul.

The sky is (not) the limit | 1km ship, record-setting asteroid and more