Solar System asteroids can be very important for astronomers to determine how they formed, but this is still a field with many mysteries to be solved. With ESO’s Very Large Telescope (VLT), a team has taken a big step in this task: they have achieved the largest collection of sharp images of objects from the asteroid belt ever recorded.

In total , are 65 images of the largest objects in the belt, which lies between the orbits of Mars and Jupiter. With this, the scientists were able to compare the variety of shapes and densities, and divided them into two large groups — the spherical and the elongated ones. The latter are more peculiar and may have been formed by the fusion between two or more objects, for example, as the tendency is for celestial bodies to have a rounder shape, due to gravity.

In addition, the new images will help scientists to obtain more details about the three-dimensional shapes of the objects, which until then had their measurements limited due to the small amount of samples to observe. Among the asteroids photographed by the VLT are the already famous Ceres, Vesta and Lutetia, previously observed by other NASA and ESA (European Space Agency) missions and much smaller ones, such as Urania, the group’s “lantern”, in size. 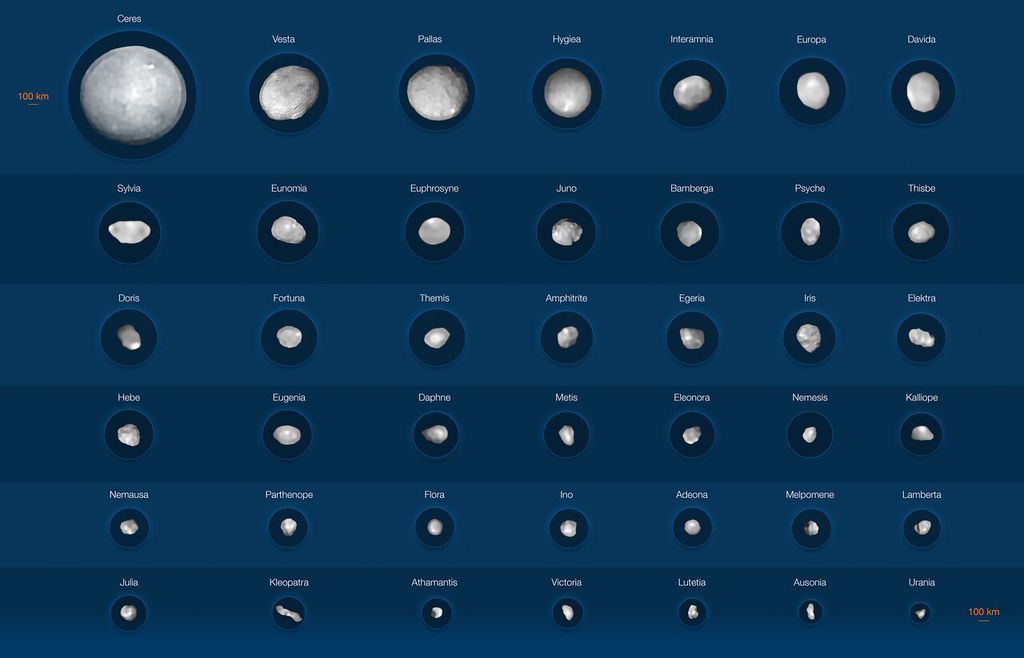 Understanding the composition of these asteroids, as well as determining the region where they formed and their evolutionary processes can provide important clues about the Solar System and the formation of star systems in general. For example, astronomers were keen to know how two such different types of asteroids ended up coming together in the same orbit. Normally, when objects in a star system have different elements in their compositions, it means that they formed in different regions. asteroids divided into two groups, a good part formed in other orbital bands of the Solar System and later migrated to the asteroid belt . Since objects formed in the inner Solar System tend to be denser, astronomers suspect that the other, lower-density group is of a trans-Neptunian nature. In other words, they formed beyond the orbit of Neptune.

Calyope and Psyche, the densest asteroids among those observed in the new study, with 4.4 and 3.9 grams per cubic centimeter, respectively (Image: Reproduction/ESO/Vernazza/MISTRAL algorithm/ONERA/CNRS)

The four least dense asteroids, for example, have densities of 1.3 g/cm, roughly the density of coal. The denser ones, such as Psyche, have a density of 3.9 g/cm3, which is higher than the density of diamond. “Our observations strongly support a substantial migration of these bodies after their formation,” said Josef Hanuš, one of the study’s authors. For him, this variety can only be explained in a model in which the bodies originated “in different regions of the Solar System”.

There are still many asteroids to be observed in the belt. Among the VLT observations, the smallest objects are 1024 km in diameter, but there are other bodies with only 42 km to 90 km. In addition, some of these asteroids have characteristics, such as impact craters, which can also be valuable study targets, but this will only be possible with more robust instruments — such as the Extremely Large Telescope (ELT), which should start operating at the end this decade. Below, you can see all the 65 photographed asteroids.

Our retinas are so complex that they surpass engineering, study shows