Dataprev, the company responsible for managing the Brazilian Social Database, especially the National Institute of Social Security (INSS) and Emergency Aid, published this Thursday (26) a notice seeking to hire an online platform to train 3,200 employees in data security. The entity’s intention is to train and make its staff aware of best practices and solutions that prevent attacks and minimize their effects.

The notice provides that all content must be taught using the Know Be 4 methodology, created by hacker Kevin Mitnik, director of Mitnick Security Consulting. He became famous for hacking into Digital Equipment Corporation (DEC) computers at the age of 16, a crime that earned him a sentence of 12 months in prison and three months of probation. His criminal past aside, he has been working since 2000 providing consulting and security solutions to companies on the Forbes 500 list.

According to data released by Dataprev, an investment of R$ 150,450.93 is foreseen in the hiring of training modules, documents, newsletters, arts and research related to digital security. The acquired method must also bring the use of multimedia solutions, special software and simulation environments that facilitate learning. 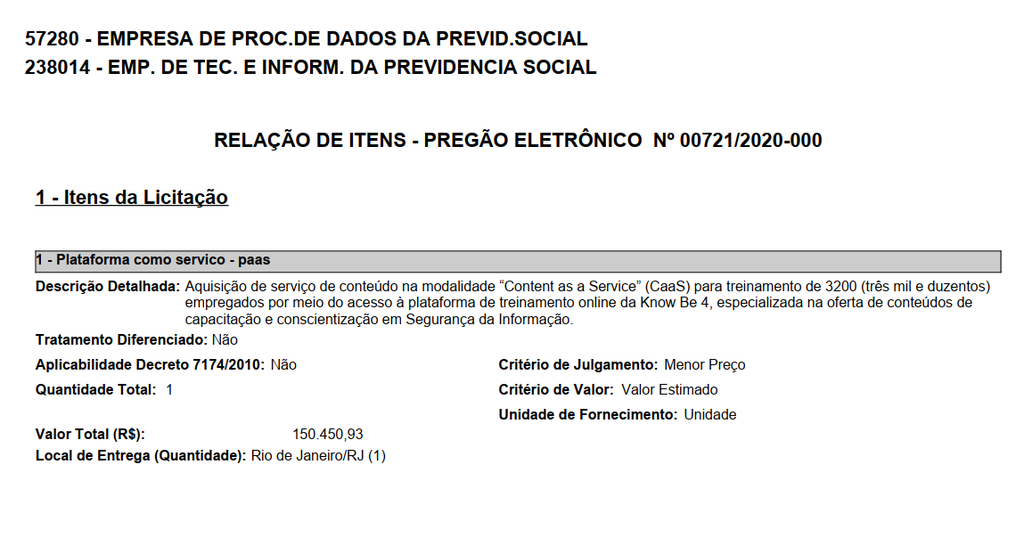 The tender comes at a time when Brazil has become one of the world’s epicenters of virtual attacks, with a marked growth in digital hijackings (ransomware). The last few weeks have been marked by attempted attacks against the National Treasury’s systems and the temporary shutdown of Lojas Renner’s services, in an action that may have involved a ransom demand that reached R$ 1 billion.

Dataprev was the target of attacks in 2021

In January of this year, Dataprev took the headlines after reports that a security incident had resulted in the leak of sensitive data. Although she denied any problems at the time, a few days after the alleged attack she fired Gustavo Oliveira Hoyer, who at the time was acting as her security manager.

With the intensification of digital hijackings and other cyber threats, companies must increasingly focus on awareness and training of employees and users to avoid them. While some criminal actions originate in unknown security breaches, most actions have some factor involved — which could be either a click on a malicious link contained in a fake email or a credential that was obtained by accessing a network wireless unsecured, for example.

How to group tabs in Microsoft Edge

Freelancers from Uber and iFood have minimum rights under the law, says TST president