Venom: Time of Carnage arrived in theaters leaving several hooks for an eventual sequel. Although Sony hasn’t confirmed anything yet about a third film, it seems very unlikely that the symbiote won’t return — especially after that post-credit scene. But the inevitable crossover wasn’t the only clue to what to expect from Venom 3 and there are even clues as to who the next villain might be.

In a movie where the focal point is the battle between two symbiotes, it’s really hard to pay attention to the secondary characters. This is the case of detective Mulligan (Stephen Graham), the policeman who suspects the strange coincidences around Eddie Brock (Tom Hardy) and who is directly linked to the origin of the villain Shriek (Naomie Harris). 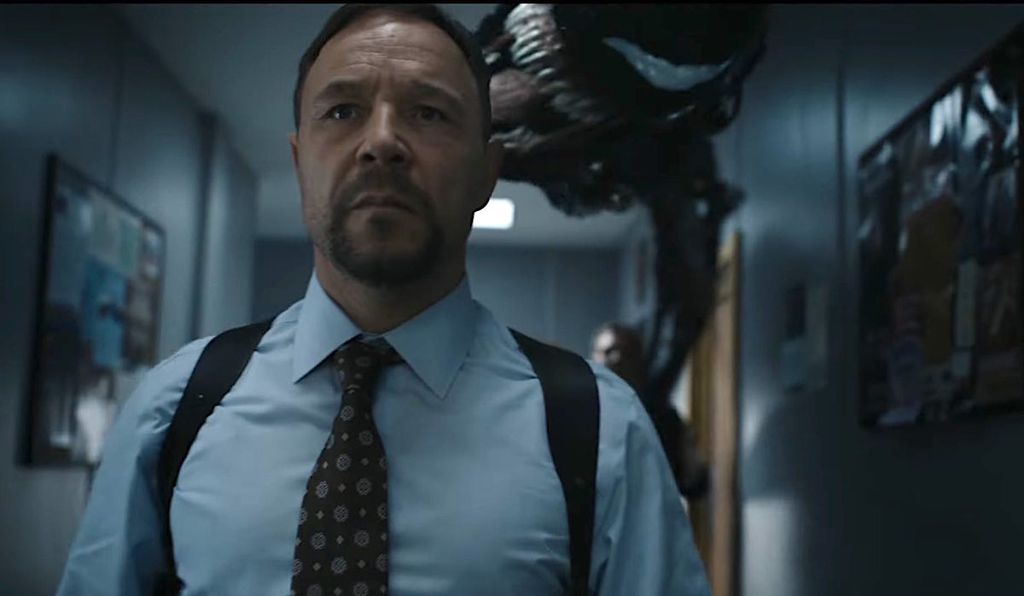 Detective Mulligan doesn’t have much prominence in Time of Carnage, but he could be the great villain of Venom 3 (Image: Playback/Sony Pictures)

In the middle of the fight between Venom and Carnage (Woody Harrelson), Mulligan comes into contact with Kasady’s symbiote and the his confrontation with Shriek left him in shock. But the last scene of the character has him babbling something about monsters and with a strange effect on his eyes.

Even for those who have never read the comics, this is the cue that the police officer will play a bigger role in the future. The point is that everything indicates that he will indeed be the great villain of Venom 3

, becoming none other than the Toxina.

Toxin is a character created in the comic Venom vs Carnage #1, by 72, and that it possesses powers very similar to the other two symbiotes, although it is considered more powerful than them. So much so that his first appearance was just born from Carnage and started to host the body of police officer Patrick Mulligan and being trained by Eddie Brock.

Only in this description it is possible to see how the films seem to be heading towards this path. As Mulligan’s final scene implies, he went on to host the alien and the consequences of this should be explored in Venom 3.

What draws attention to this is that, at least in the comics, the first version of Toxina is not a villain, but an anti-hero like Brock himself. As a police officer, Mulligan tries to use his new powers for good and there are stories where he acts alongside Spider-Man and even the Avengers. At the same time, he complains about the symbiote’s influence on his mind, saying that the creature brings out the worst in him and makes him much more violent and brutal. makes it a very interesting addition to a sequel. That’s because, if he does appear in Venom 3, he can be used as a great antagonist instead of the classic villain. As stated, he ends Time of Carnage by calling the symbiotes monsters, implying that he must use the power of the Toxina to hunt down Eddie Brock and Venom. And as repetitive as it is to see a third symbiote fight on screen, having someone who is good at using the symbiote’s powers and hitting head-on with the protagonist’s methods can yield interesting moments.

In addition to a bad wig, Detective Mulligan also won a symbiote in Time of Carnage (Image: Reproduction/Sony Pictures)

At the same time, this doesn’t rule out the possibility of the two characters joining forces against some even greater threat . This kind of partnership has already become a hero story cliché and the Venom franchise doesn’t seem to mind replicating that structure.

In addition to the Toxin, Venom 3 must also mark the definitive formation of the Aranhaverse with the participation of Tom Holland’s Spider-Man. As the post-credit scene of Time of Carnage pointed out, the crisis in the multiverse has the characters coexisting in the same world and it seems that the original Wall Climber will come across with Venom and Toxina in the future.

It is this meeting that leads us to believe that Toxina should be more of an antagonist than an ally, since what everyone wants to see is Peter Parker and Eddie Brock fighting side by side and Patrick Mulligan’s symbiote is the perfect threat to justify this unlikely union. 3 arrives in theaters (remembering that it wasn’t even announced), Sony’s Spiderverse will also feature Morbius and it could be that the Vampire movie Vivo also brings evidence of the plot that the studio wants to build for its cinematographic universe. Until then, we’ll have to keep speculating.

Ford to launch electric or hybrid van in Brazil soon