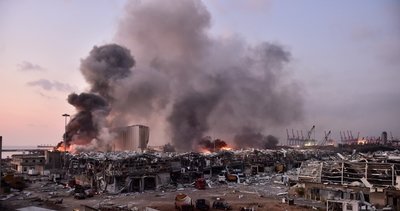 According to the Lebanese news agency NNA, Prime Minister Diyab did not go to testify today as part of the investigation into the explosion.

Thereupon, the judge Tariq al-Bitar decided that Diyab’s statement be taken on September 20 and ordered that he be forcibly brought to the courthouse by the law enforcement officers.

On the other hand, former prime ministers Najib Mikati, Fuad Signora, Saad al-Hariri and Temmam Selam reacted to the decision on Diyab.

In the written statement made by the former prime ministers, it was pointed out that no decision was made to force a prime minister in the history of Lebanon, and it was stated that this was a clear insult to the prime minister’s office and set a dangerous precedent.

“The decision, which poses political, national and constitutional dangers and harbors political doubts, coincides with years of work to undermine the Taif Agreement, undermine the prestige of the prime minister’s office and limit its position in the political system,” the statement said.

THE EXPLOSION AND INVESTIGATION PROCESS IN BEIRUT PORT

On August 4, 2020, a fire broke out in a warehouse containing explosives in the Port of Beirut, and then a very powerful explosion occurred that shook the entire city.

President Michel Avn said that 2,750 tons of ammonium nitrate, which had been kept in a warehouse in the port for 6 years, caused the explosion.

One of the judges investigating the explosion, Fadi Savvan, on December 10, 2020, along with Prime Minister Hassan Diyab, ex-Minister of Finance Ali Hasan Halil, former Ministers of Public Works and Transport Gazi Zuaytir and Yusuf Finyanus, “neglect and negligence that caused the death and injury of hundreds of people. ‘ he accused.

The accusation of Prime Minister Diab and former ministers of “neglect of duty” has been the subject of debate in the country.

At the request of the former Finance Minister Khalil and the former Minister of Public Works and Transport Zuaytir, the Lebanese Court of Appeal took over the task of investigating the explosion in the Port of Beirut from Judge Savvan.

On February 20, two days after the decision of the Court of Appeal, Minister of Justice Marie-Claude Najm appointed Judge Bitar to investigate.

Pneumonia: complications from COVID-19 can lead to overuse of antibiotics