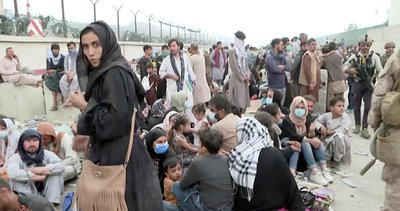 Thousands of Afghans who want to leave Kabul have been waiting for days behind the barricades set up in front of the entrance gates of Hamid Karzai International Airport. On the other hand, it was seen that beauty salons were destroyed in Taliban-controlled Kabul. They darkened the faces of photos of women in the beauty parlor. Here is the latest situation in Kabul…

In Kabul, where the Taliban took control, those who want to leave the country continue to wait at the entrance gates of Kabul Hamid Karzai International Airport. Thousands of people, including the elderly, women and children, have been waiting to be taken to the airport to leave the country for 5 days.

Afghans, who aim to go on a “journey of hope” by entering the airport through the entrance gates, where those with passports and flight permits are selected one by one, are kept behind barricades created with barbed wire and concrete.

Babies and children are most affected by the harsh conditions at the gates under the control of foreign soldiers responsible for the security of the airport and its surroundings.

An Afghan man, who had been waiting at the door for days for evacuation, explained that they were suffering from food and water shortages. Explaining that they were waiting to enter the airport and be evacuated, Afghan said that it would not matter which country he would go to, and that he wanted to leave Kabul for sure.

PHOTOS ON WINDOWS WERE DESTROYED
Compared to a few days ago, far fewer women are taking to the streets in Kabul. Those who can go out to the outside world usually cover their faces with a veil.

Pixel Line 6 and more: what to expect from the next Google event