Over these last more than 30 years of superhero movies, we’re used to demanding fidelity to comics. However, what if the base material is notoriously known to be bad? Well, that doesn’t seem to be a problem for Venom: Time of Carnage, which sticks to the dubious quality of the comic books and gladly embraces all this badness to bring a movie even closer. exaggerated and absurd than its predecessor.

He follows the same primer as made the first feature so loved by the audience, mixing the structure of a hero film with that more brutal vibe typical of Venom and that kind of weird humor that makes the protagonists almost a couple. The big difference here is that director Andy Serkis and actor Tom Hardy no longer try to take it all seriously, indulging in playfulness and pointing out how ridiculous it all sounds.

And this soon reveals the great charm of Time of Carnage — so much so that there’s even a Venom speech in the middle of a rave telling a passionate audience that you can’t be ashamed of who you are and that you have to accept your nature. So, what we have is precisely a story that is not ashamed of its own absurdities and, on the contrary, relies on it to raise the tone.

True to the original, however bad it may be

The years 1990 was a pretty infamous period for comics. At that time, publishers wanted to show that their heroes could also be adults and filled the stories with unreasonable violence and more radical visuals, full of weapons and sharp objects. It is in this context that both the villain Venom as we know and his main enemy, Carnage, emerges.

The couple dynamic between Venom and Eddie Brock is what saves the movie (Image: Reproduction/Sony Pictures)

From the moment that Venom: Time of Carnage embraces the absurd, everything is allowed. It’s the logic of South Park’s Chewbacca Defense: nothing there makes sense, but things are presented in such a way that you just don’t care about it and just want to laugh about it bizarre dynamic between the protagonists. Throughout the film, Venom keeps saying he wants to eat brains and this is almost a warning to the audience that, in order to enjoy the story, you need to leave yours outside the room. 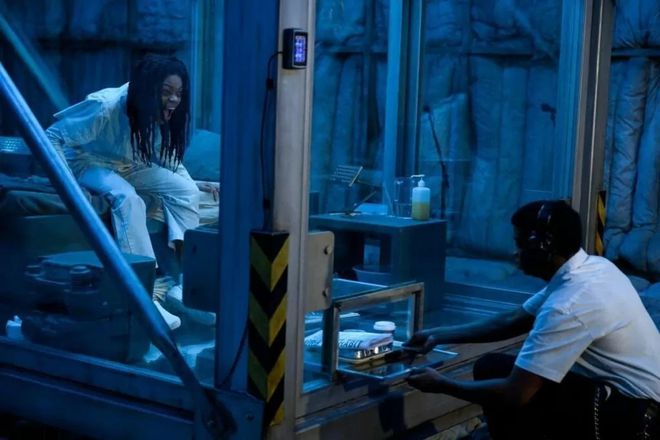 And you don’t understand this as something all bad. It’s the same formula that won over the audience in the movie of 450498 and which is repeated here with even more intensity, as Brock and the symbiote are no longer getting to know each other and now share their lives really as a couple. And, in fact, it’s a lot of fun to follow the duo’s dialogues, which deliver good humor because of this dysfunctional nature of the relationship. It’s all so ridiculous that it turns around and it’s good.

But not everything works in this histrionic and hallucinated tone. While these games fit well for the dynamic we already know between Venom and Brock, the introduction of the villain Carnage tries to follow the same path, but without giving up a dramatic charge that doesn’t work. And as much as Woody Harrelson is an amazing actor, there’s no way to save his Cletus Kasady. 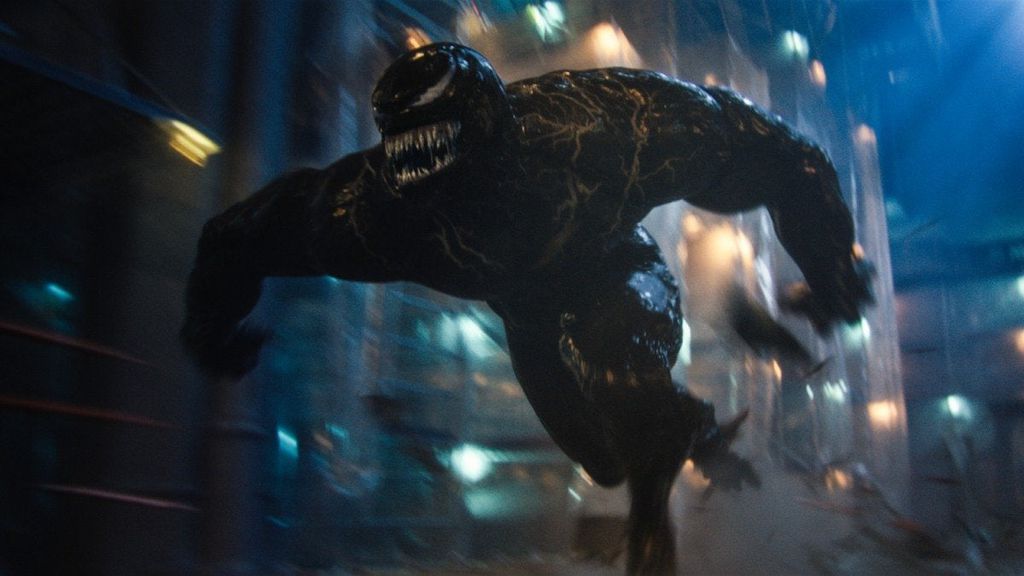 The best thing about Carnage was abandoning the ridiculous wig from the first movie (Image: Playback/Sony Pictures)

That’s because, once again, nothing makes sense in this character. It exists only to antagonize the protagonist and the script seeks solutions to make him get the symbiote, even if none of them is logical. The

sentenced to death shows a huge interest in Eddie Brock without any apparent justification and reveals that he knows details of the hero’s life that not even the public was aware of. Why? Because the script needed this proximity, even though it has no reason to be in the story.

And Time of Carnage does not bother at any time to explain any of this. If Kasady is crazy, everything is allowed, right? Just that to explain the message he wants to send on the cover of the newspaper to the ex-girlfriend he thinks was dead or the idea of ​​killing Anne (Michelle Williams) in front of Venom and then taking the girl to a place in that the hero cannot see just for the scene to be dramatic. By wanting to show that the villain is chaotic for being crazy, Venom 2 treats the audience like an idiot.

Just like in the comics, Carnage relies on an empty brutality to claim to be adult and violent (Image: Reproduction/Sony Pictures)

In fact, this is where we really see that nineties essence of comics in practice. They are silly, childish solutions that think they are adult just because they have deaths and gooey, sharp-toothed monsters. After all, few things are dumber than the villain whose main motivation is to get married in church or who accesses sensitive FBI data with the symbiote entering the USB of a notebook at a gas station.

And these absurdities are not isolated plot points. Venom: Time of Carnage brings several of these moments, making it clear that any and all attempts to put aside the mockery only reveal how bad the movie is. When he decides to be a little more serious in developing his characters, it quickly gets out of hand. Not by chance, he only has 1h and still manages to skid several times.

This is very apparent in the villain Shriek (Naomie Harris), whose existence revolves around these unremarkable exaggerations. purpose. The character with supersonic scream powers has no weight in the story, just serving as a motivation for Carnage to want to get out of prison and return to the life of murder. And she suffers from the same affliction that because she is insane, all bad dialogue and action without context works.

Shriek could leave the movie and it wouldn’t make a difference (Image: Playback/Sony Pictures)

Both the script knows how empty it is that the movie opens already putting it within the logic of Chewbacca Defense: she is taken to a secret government institution for being dangerous because of its powers. Except no one bothers to gag her or anything, so obviously she tries to escape. As if that wasn’t enough, he gets shot in the eye in the process and, instead of dying, he just gets a white eye.

AND Time of Carnage is full of meaningless moments where he simply begs the viewer not to think too much about it and just get on with that mess. In the cases of playfulness involving Venom and his almost romantic relationship with Eddie Brock, this works well precisely because he doesn’t take himself seriously and pulls the film almost like a slapstick comedy. It was what made the first feature a hit with the public, despite the bombardment of critics. In that sense, it takes the formula to a new level. 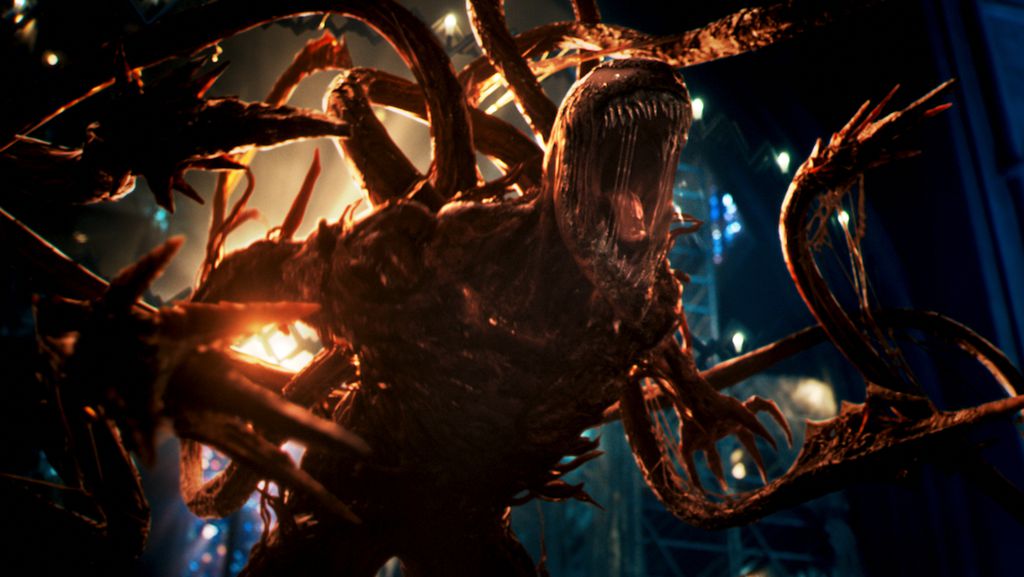 Few things translate the years so well 2000 in the comics as the Carnage (Image: Reproduction/Sony Pictures)

On the other hand, anything that is out of this dynamic is embarrassing to follow. And not just for putting actions and motivations for your villains that don’t make any sense, but for not making up your own mind about what you want from them. There are several attempts to create a dramatic layer on Carnage’s past, sometimes saying it was because they separated him from Shriek, sometimes saying it’s the press’ fault that didn’t hear both sides about their story. In the end, the film wants to build a villain who acted because he wanted to be a normal person, but doesn’t bother to develop that and boils down to a horrible speech about how he just wanted the friendship of Eddie Brock.

Once again, it’s the Chewbacca Defense in action. It’s such an absurdity that, if nothing makes sense, there’s no reason to think about it too much. It’s really a story for you to disconnect from the world and laugh at endless nonsense for just over an hour. Maybe waiting for a post-credit scene that really is all we’re hoping for.

In the end, Venom: Time of Carnage is like that teenager who thinks he is an adult just because he learned to speak pal I don’t think about it and like some things a little heavier, but still empty and not being taken seriously — that is, a very faithful adaptation of the chaotic and silly climate that comics used to be in the years 90. In other words, it has what it takes to be a new blockbuster.

Venom: Time of Carnage is playing in movie theaters all over Brazil; guarantees your ticket to Ingresso.com.

Signs of dementia are in the blood and can be found, study points out