August 11-13 was marked by a spectacle in the night sky, provided by the passage of the Earth through a cloud of debris from comet 109P/Swift-Tuttle. That’s why the astronomical images selected by NASA last week include several records of the phenomenon, made in many different places around the world — one of them, by the way, captured the meteors, the Milky Way and some other rare objects in one incredible image! In another photo, the photographer managed to register not only the glare of the meteors, but also two large planets in the Solar System.

Incidentally, this week’s selection of images also includes some beautiful recordings of the Ring Nebula, a planetary nebula formed by the outer layers released from a Sun-like star, which result in a formation of stunning detail and color. And, as usual, you can check the photos accompanied by fun facts about them. 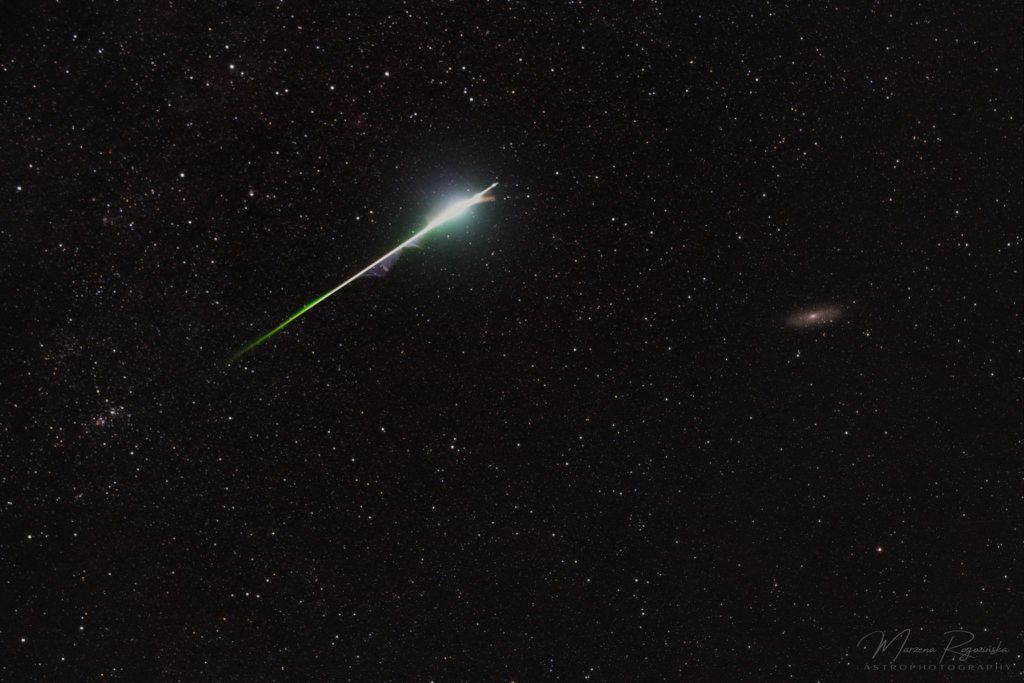 This photo was taken early in the morning on the 13th of August in Busko-Zdroj, Poland. Amidst the various recorded stars, there is the bright and colorful trail, coming from one of the Perseid rain meteors. This glowing “tail” shows what happens when a small grain of cosmic sand, released from comet Swift-Tuttle, is vaporized as it travels through the Earth’s atmosphere at a speed of nearly 60 km/s. The greenish trail emerged about 100 km above the Earth’s surface, and heads towards the constellation Perseus, which inspires the name of rain.

On the right side of the image is galaxy M31, also called Andromeda. Located 2.5 million light years away from us, this galaxy is the most distant object that can be seen with the naked eye — but don’t worry, that’s going to change in a few billion years. In the still distant future, the Andromeda Galaxy and the Milky Way will collide, and should result in a spiral galaxy that may have some characteristics of elliptical galaxies, such as the central bulge filled with stars. 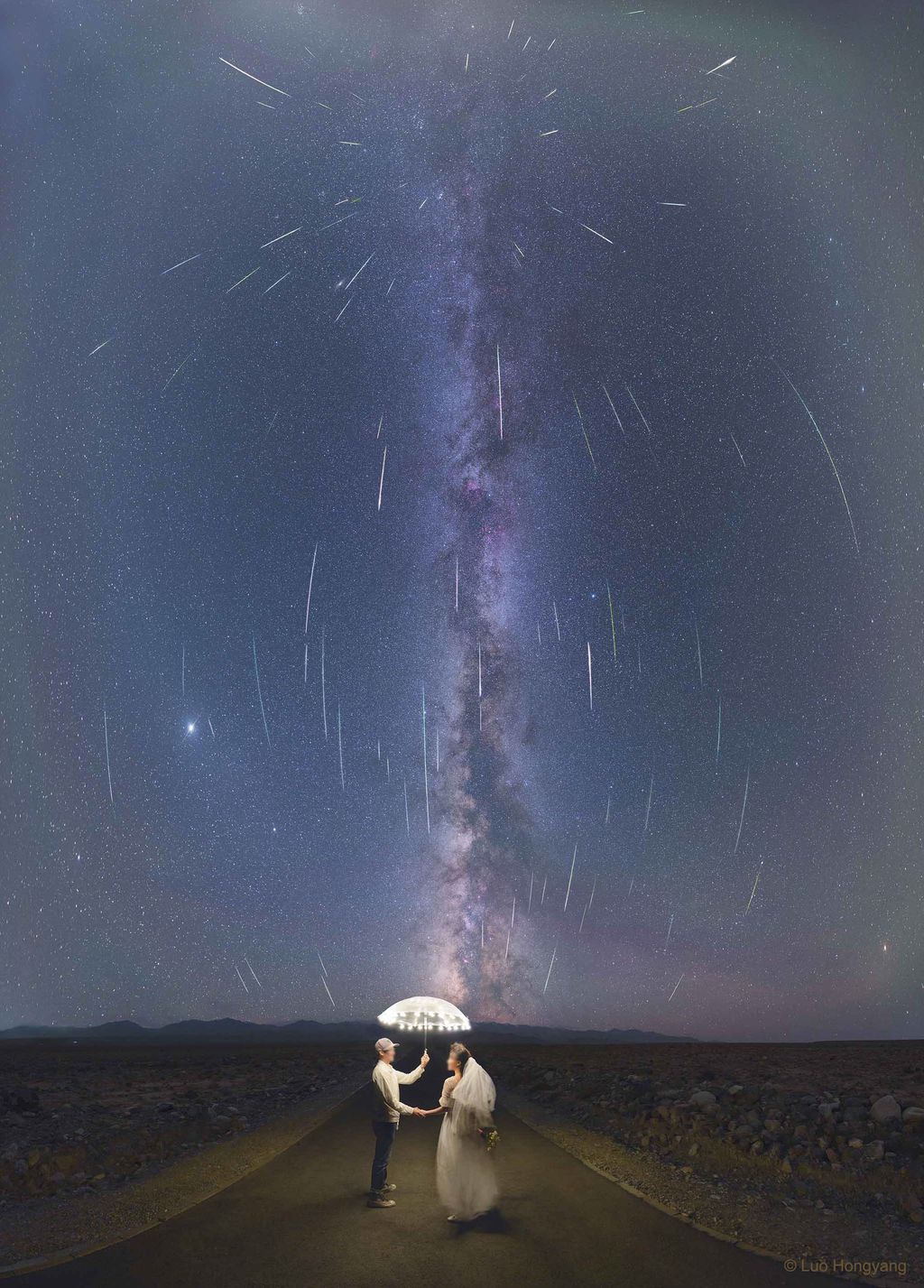 Well, the passage of the Swift-Tuttle comet fragments through the Earth’s atmosphere, which form the Perseid meteor shower, yielded several incredible records around the world — like the one you saw above, made in Jiuquan, in the Chinese province of Gansu. In addition to the spectacle provided by the meteors, the photo even included Jupiter and Saturn, on the left side, and the glow of the central strip of the Milky Way in the middle of the image. As the photo was taken with a very long field of view, it was possible to record the curvature of the sky, which appears in the trajectory of the meteors.

Despite the name “rain”, rest assured that not even an umbrella like the one in the photo would be needed to protect viewers from bright objects in the atmosphere. That’s because the meteoroids that make rain are quite fragile, and their structure has “soft” compounds that release volatile materials as they travel close to the Sun; these materials are quickly vaporized in the upper atmosphere. So, in the end, meteor showers don’t put us at risk, because we’re protected by miles of atmosphere. 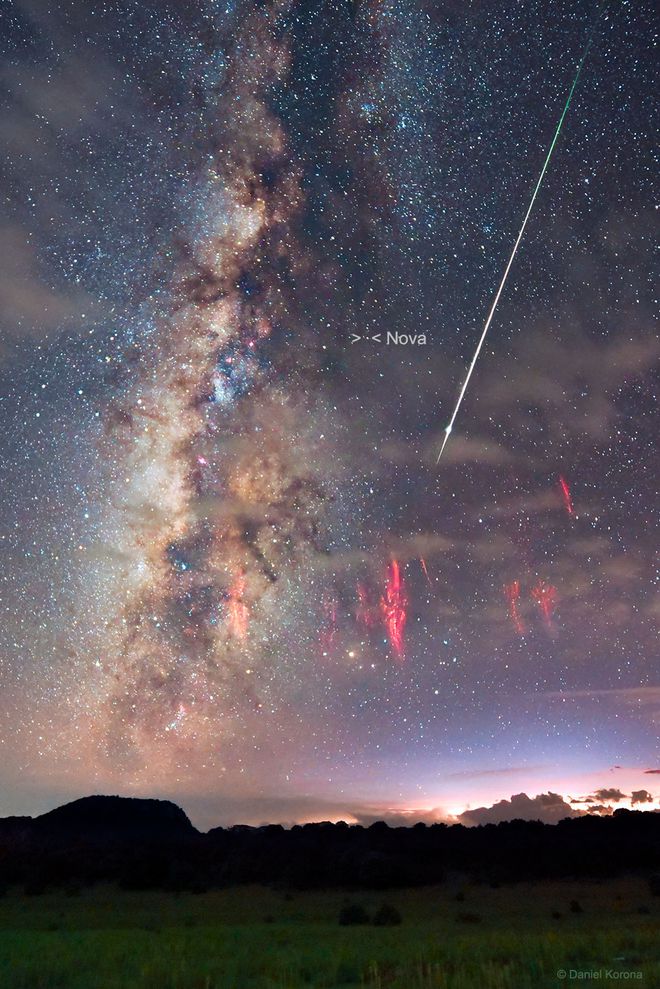 The photo above was taken in Zacatecas, Mexico, and is an impressive record that brings together various objects. One of them, of course, is the central strip of the Milky Way, which appears bright on the left side of the photo and can be seen in dark places and away from light pollution. On the right side, there is the very bright trail left by one of the meteors from the Perseids rain, which occurred recently. To the left of the meteor is an indication of an unusual nova; this is the star RS Ophiuchus, considered a recurrent star because it explodes in nova regularly, at intervals of 15 to 20 years.

The reddish rays at the bottom of the image are a type of transient light event known as a “sprite”, discovered a few decades ago and still not fully understood. Sprites form above clouds, and can reach up to 100 km in altitude. They usually last no more than a few milliseconds, and although they are quite brief, they are capable of illuminating large regions of the sky.

Well, all of this was recorded in a single photo, taken in one night! 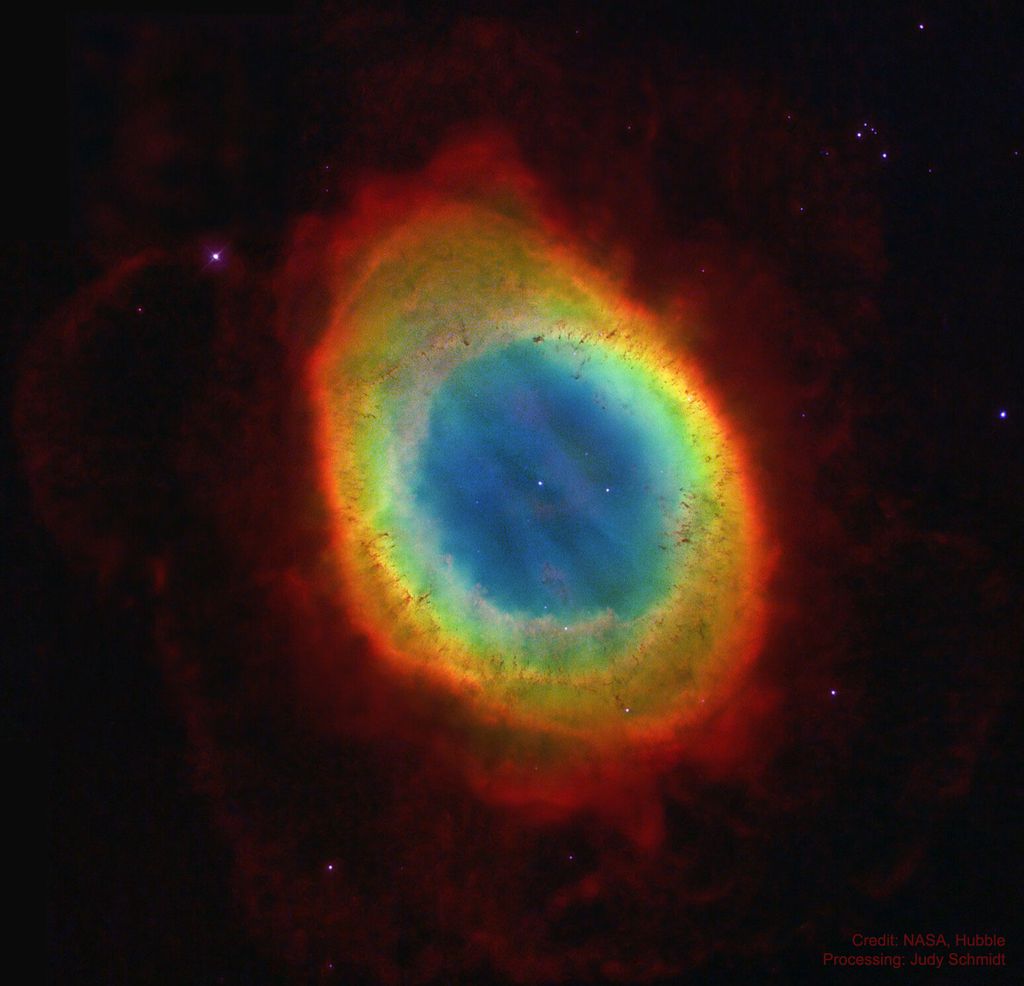 When it comes to space objects resembling the shape of a ring, it is common for Saturn’s rings to come to mind. In fact, they share their popularity and admiration with the Ring Nebula, located about 2,500 light-years from us. Above, you notice its ring structure, but know that much of this is due to our observational perspective — so much so that recent mapping has produced a three-dimensional model of the nebula, and the result is a shape that is much more like a donut involving a gaseous and glowing cloud.

This is one of the most studied planetary nebulae and, despite what the name seems to indicate, it has no relationship with planets. This confusion comes from the historical origin of the term used, because when these objects were discovered, the disc-shaped structure and similarities to Uranus and Neptune led to an incorrect association with planets. In the case of the Ring Nebula, its glow comes from the outer layers released from the star at its center, which is nearing the end of its life. To find it, look for the dot of light in the middle of the nebula.

Wednesday (18) — A planetary nebula in detail 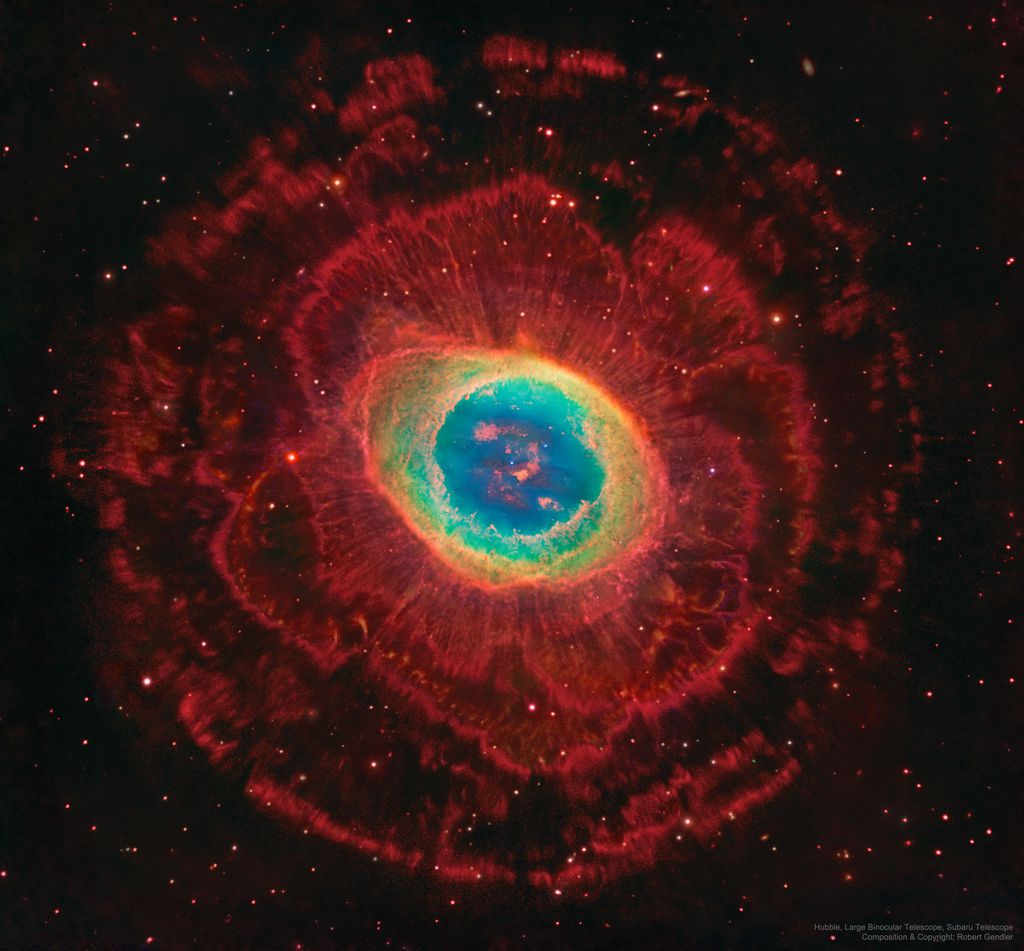 Here, we have another image of the M57 nebula — the same Ring Nebula — which appears here in a composite of data collected by the Hubble, Subaru, and Large Binocular Telescope telescopes. The result is a detailed image, which shows the complexity of this formation and the many colored filaments of it expanding away from the center; the red light comes from hydrogen atoms, and the colored ring in the center of the nebula appears very clearly.

This image includes visible light and, of course, infrared, which is a great ally in the observations of distant objects, especially in the case of those that have too weak luminosity in visible light. As infrared light has longer wavelengths, which can pass through regions where there is gas and dust, scientists are able to investigate the mysteries of planets, cold stars, nebulae and many other objects that would not be revealed with visible light, captured by optical telescopes .

Thursday (19) — The shine of the meteor and the stars 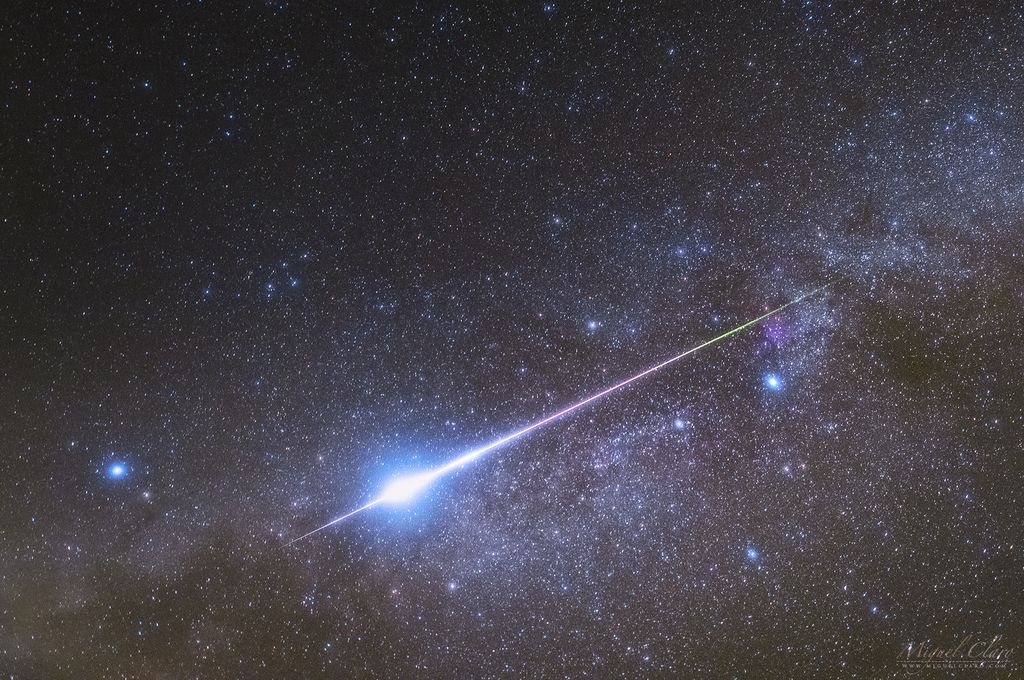 This is another record of the Perseids rain meteors, photographed in Portugal on August 12th. If you were surprised by the glow, you’re not alone: ​​the object was so luminous that the photographer believes it was one of the brightest meteors he’s recorded in years. This meteor is formed by cosmic sand grains that were released from the Swift-Tuttle comet, traveling so quickly that it emits a greenish glow. This is a typical light emission from oxygen atoms at altitudes of at least 100 km. 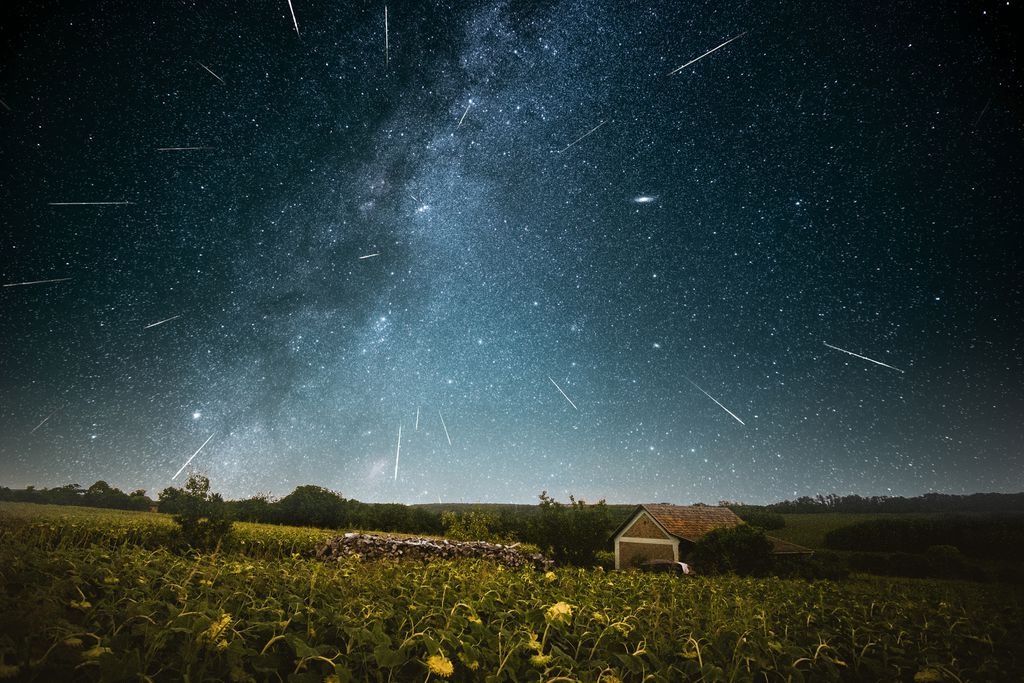 The image above impresses with the brightness of meteors and so many stars in the sky, isn’t it? Well, to reach this result, the photographer kept his camera under the starry sky for three nights in a row to make a series of exposures — in the end, he got over 1,500 pictures taken during the nights of August 11th to 13th, to try to capture as many meteors as possible. Thus, he formed the photo above, which is a composite of the different exhibitions made during this period.

Also, notice that the meteors seem to follow a converging trajectory, pointing to the constellation Perseus. In fact, this interesting effect is more a matter of perspective: the meteors are traveling on paths parallel to each other, but appear to travel on converging paths due to the distance in the starry sky. Some photos were taken in the village of Magyaregres, Hungary.

What is it like where the edge of the Solar System is?

Microsoft 365 now comes with anonymized data reporting from the start

Why don't poisonous animals die with their own toxins?