Oppo should also enter the smartphone market with flexible screens soon, with a foldable model and another with a scrollable display. The information was disclosed by the brand’s vice president, Liu Bo, to a Chinese news portal.

Details of the devices are not yet known, but the company has already presented a prototype of device with scrollable screen in November of last year. The concept has a 6.7-inch screen when closed, but the display can extend up to 7.4 inches via a smooth mechanism that moves sideways. 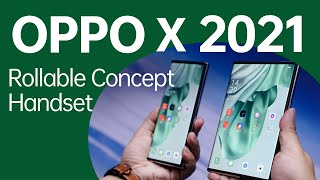 In addition The device’s construction features volume buttons on the sides, a USB-C input, and openings for speakers and internal microphone. The brand is also expected to introduce a phone with a foldable screen, but it’s not yet clear whether it will be flexible on the horizontal axis (like the Galaxy Z Flip 3), or vertically (like the Galaxy Z Fold 3). The brand has never applied the prototype’s features to general-purpose devices, and still has no folding or scrollable cell phones in its product line.

In addition to smartphones with a flexible screen, the brand is also expected to launch a new tablet, but which also doesn’t has many leaked details regarding the internal specs so far. However, it is already known that Oppo should adopt a new variant of ColorOS, aimed at tablets. It will have a dock, specific widgets, larger and/or more spaced elements, among other changes compared to the smartphone version of the brand’s operating system.

Oppo, which is part of BBK Electronics along with Vivo Mobile, Realme, OnePlus and some other sub-brands more focused on the Asian market, has obtained good results, according to the portal Sina Technology . In China, the company ranks third in online sales of devices above 4. yuan (about R$ 3 .000 in direct conversion), and secondly if offline sales are considered.

Liu Bo didn’t specify when Oppo will release its new devices, but it’s expected that at least the tablet can make it to the first half of 2021. The device with a scrollable screen should take a little longer.

Kabul woke up to the sound of explosions! He conveyed the latest developments from the hot spot