decade, a couple of researchers started a study that would become famous with regard to behavior. Psychologists Winthrop and Luella Kellogg, who ran a laboratory at Indiana State University and Florida State University, were intrigued by the case of children raised by wolves. They then thought: what would happen if they created an animal among humans?

The two caught a seven-month-old chimpanzee named Gua, a native of Cuba, and took him home. The chimpanzee was raised alongside the couple’s ten-month-old son, Donald. Gua received the same care and attention as his “brother” and was tested daily. Although he never learned to speak like a person, his physical growth and motor skills progressed rapidly compared to other captive chimpanzees.

However, the experiment didn’t work! It turns out that, at the same time, Donald began to imitate the grunts emitted by Gua, which may have been one of the reasons for the end of the experiment in just six months. The Kelloggs documented the entire experiment in the book The Ape and the Child. If you want to go deeper into the story, watch the documentary about what happened below:

To know even more about the study of the chimpanzee created alongside a human being, you can access it for free here. 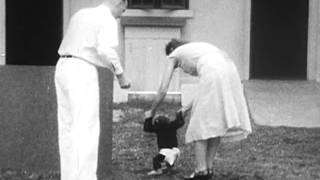