Doja Cat clips are recognized for the artist’s keen aesthetic sense, lots of wigs, flamboyant costumes and, well, repeated PlayStation 5 appearances. Sony’s console became a repeated icon in the rapper’s clips, who even created a fake game in the video for “Kiss Me More”.

Hey @Sony @PlayStation are we going to get the PS5 controller and @DojaCat collab? It would be perfect! #PS5 #PlanetHer pic.twitter.com/eU9opEPzpv

Some fan pages dedicated to Doja Cat went further and created a launch campaign for the game “Grab the Fruit“. A box art developed for fun, imagined the singer’s game produced by the unstoppable Insomniac Games, by Marvel’s Spider-Man: Miles Morales and Ratchet & Clank: In Another Dimension.

Fans imagined what the cover of the game would be like of Doja Cat for PS5 (Image: Playback/Editing/Twitter/Doja Cat Paraguay)

Kiss Me More, the PS5 also made cameos in the clips for “Need to Know” and “You Right“, partnered by singer with The Weeknd. In the video for “Need to Know”, Doja appears with the console at a party with friends at home, in the greatest mood of “slumber night on another planet”.

Already in “You Right”, Doja Cat embodies the drama of dating a gamer and appears in scenes bored and ignored by the romantic couple holding a DualSense.

Why does the PS5 appear in Doja Cat clips?

PS5 appearances in Doja Cat clips marked one of the strands of the video game launch campaign, which involved a team of influencers and music artists. The console integrates Doja Cat clips into actions that the advertising world is used to calling indirect marketing or product placement. The tactic presents a product within the context of a movie, soap opera or video clip, without talking directly about it.

The partnership between Sony and Doja Cat was one of Sony’s bets connecting the PS5 to the image of singers and influencers during launch. The brand even hired the rapper Travis Scott as a creative strategy partner. 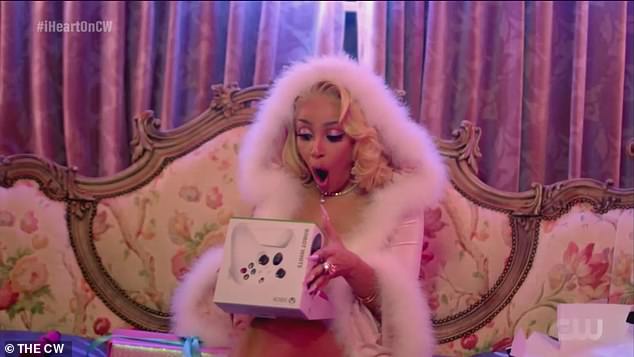 Helped in the partnership, the fact that Doja Cat has a record deal with RCA Records, one of the arms of Sony Music.

Doja Cat’s gaming career didn’t start with advertisements for PS5 promotions. The singer is admittedly a fan of video games and often posts comments on the games she’s been playing on Twitter.

In December 2021, Doja Cat posted on Twitter that she was in trouble with one of Lara Croft’s games. “Fuck ‘Rise of the Tomb Raider. I’m going to pee on my Xbox,” wrote the rapper on the social network.

Administrator of the Doja Cat Brasil page on Twitter, Guilherme explained to Canaltech that Doja Cat has always been there involved in the gamer universe. “Another example is the video for ‘Like That‘, which has many similarities to games and references to the anime

Sailor Moon. Doja Cat is a gamer, which a lot of people don’t know,” he said.

“She’s always been involved with games since the early days of her career. Unfortunately, with a busy schedule it’s difficult to make lives , so we don’t know when it will open. The Doja is also unknown, she never warns”, reported the administrator of the page dedicated to reporting news of the singer.

jasprit bumrah yorker: India got the ball to reverse and that was the turning point: Joe Root after England lose Oval Test

Smartcoins and cryptocurrencies have the potential to appreciate 400-fold, analyst says

Babar on India: on T20 World Cup clash, Babar Azam said India will be under more pressure than us