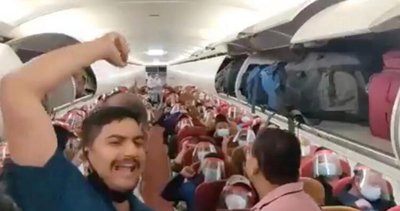 The world has been locked into developments from Afghanistan for days.

The airport in the city, which has become the last hope of tens of thousands to escape from the country, after the Taliban’s capture of the capital of the country, Kabul, is the scene of a human tragedy, so to speak.

While the wait continues at the airport, where dozens of people have lost their lives to date, good news comes from the region, albeit rarely.

Images have emerged that reveal the joy experienced by about 90 people waiting to be evacuated from Kabul after they were able to find a private on the plane.

While the images published on Twitter became viral in a short time, the joyful cries of the passengers once again revealed the dimensions of the tension in the city.

According to the news in the British Metro newspaper, 2 Nepalese citizens and dozens of Indian citizens took part in the plane in question.

Arindam Bagchi, the official spokesperson of India’s ministry of foreign affairs, shared this video on Twitter with the note “The journey of the evacuees to their homes has begun”.

Bagchi underlined the information that the plane, which hosted 87 passengers, first flew to Tajikistan and then to India.

However, hundreds of people who are not as lucky as these passengers are waiting to be evacuated by their countries.

The Taliban, on the other hand, is not willing to extend the date set as August 21, despite the crisis.

How to optimize Pokémon UNITE graphics to run on your mobile

How to edit a slow motion video on iPhone

Astronauts take new photos of the ISS from afar — and they are sensational!