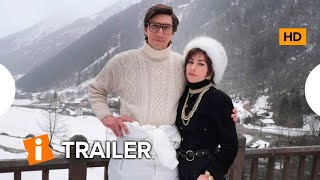 Casa Gucci, one of the most awaited movies from 30 and starring Lady Gaga, won this week more official images, a few months of release in theaters. The film, directed by Ridley Scott, is based on the true story of Patrizia Reggiani, ex-wife of Maurizio Gucci, manager of the luxury brand Gucci.

The 24 best drama movies to watch on Prime Video

In the images, we see Gaga characterized as the ex-socialite with different clothes for each occasion: dressed in wedding, party and ski clothes, with a red dress and definitely expensive jewelry, in addition to a black jacket and sunglasses, fleeing from photographers, probably after the crime had been committed.

The film is based on the book Casa Gucci: A History of Glamour, Greed, Madness and Death, by Sara Gay Forden, which tells about Reggiani’s plans to order her ex-husband’s death. The motivation for the crime was that Gucci left Patrizia to have a relationship with Paola Franchi, lying to his ex-wife who was going away and never coming back. The crime took place in Milan, Italy, when the assassin hired by Patrizia Reggiani fired four shots at Gucci as he entered his company’s headquarters. In addition to the principal, four other people were convicted of the murder.

Movies, Series, Music, Books and Magazines and free shipping on Amazon for R$ 9,90 per month, with free trial for 24 days. What are you waiting for?

Casa Gucci arrives in theaters on the day 24 November.

Billions of old Androids will gain an important privacy feature

See a “lava tsunami” being released from the Cumbre Vieja volcano

Bad smell in the armpits? It's not your fault, it's your microbiota!