The first trailer for Spider-Man: No Return Home has been long overdue, and just over four months before it premiered, we didn’t even have a teaser for the attraction — which goes against the promotion strategy of most of the films on the website. Sony Pictures and Marvel Studios, who share the production of Tom Holland’s third solo feature in the role of Arachnid. Behold, after a long wait, the companies finally released the official preview to the public, this Monday night (23), during CinemaCon, Sony’s event held in Las Vegas (USA).

The trailer, which is the finished and complete version of an unfinished snippet that leaked on social media a little earlier, confirms much of the rumors surrounding the film. After having his secret identity disclosed to the world by Mysterio in the previous film, Peter Parker asks Doctor Strange (Benedict Cumberbatch) to make a spell capable of causing “global amnesia” in all people – so that, that way, no one is remember that he is the alter ego of the Wall Climber.

Something goes very wrong, and the Multiverso, which had already been showing off in other Marvel productions, such as the WandaVision and Loki series, here opens its doors once and for all. The video scenes bring references to villains from other Friend of the Neighborhood films, such as William Dafoe’s Green Goblin and Alfred Molina’s Doctor Octopus (both from Spider-Man 1 and 2); and Electro (from The Spectacular Spider-Man 2 – The Threat of the Electro). 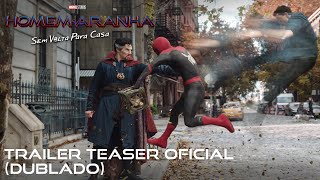 It is worth noting that the premise also makes a direct reference to one of the most hated arcs by readers: the Um Dia a Mais saga, in which Peter Parker makes a pact with Mephisto so that the world forgets his secret identity, in exchange for the memories of his marriage to Mary Jane.

Spider-Man: No Return Home is scheduled to premiere on December 17th.

Approved from England! A first in the fight against coronavirus…

Far Cry 6 has the franchise's cruelest villain; check our ranking

What is and how to use Intel Turbo Boost on Mac