The creation of content for the internet has conquered more and more people with the latest generations of smartphones and their “professional” cameras. However, if nowadays we don’t need to resort to a DLSR camera to have great image quality, audio capture still suffers from the reduced size of cell phones, forcing us to purchase a dedicated microphone to record videos with better quality. 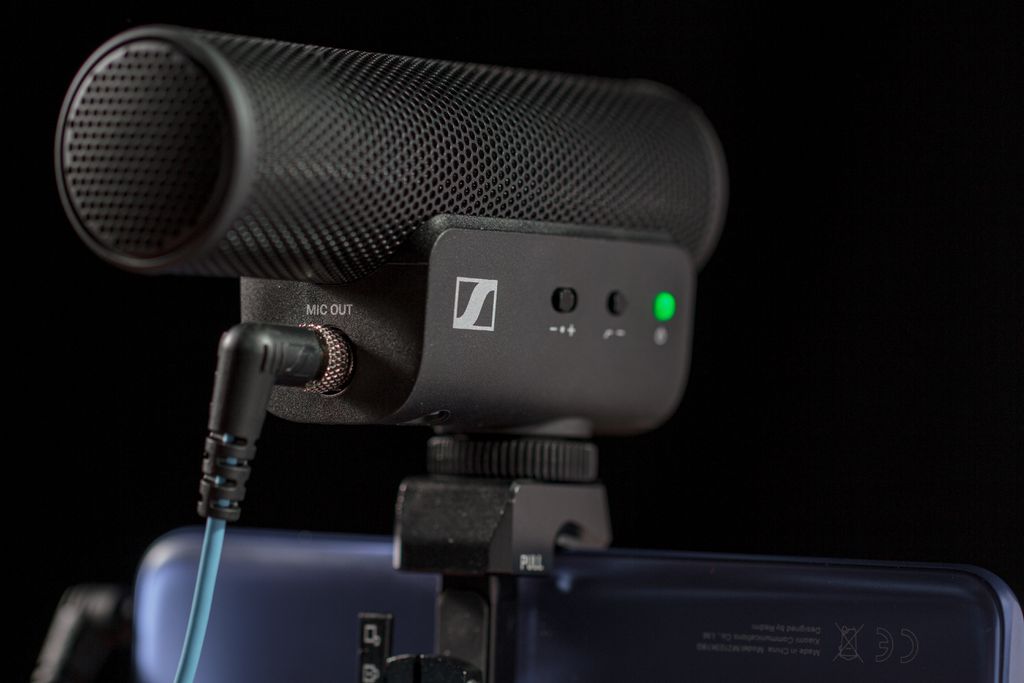 Check the current price of the MKE Mobile Kit

The MKE 300 Sennheiser’s Mobile Kit offers the main tools for those who usually record their content using a smartphone or more compact camera. The star of the product is, of course, the directional microphone — also known as the Shotgun.

The accessory is very light and weighs specifically 93, 5 grams, according to the company, probably a little more with the two AAA batteries inserted. In all, we have four buttons — on/off and the gain controls, low cut filter and volume — and two standard inputs, one P2 (3.5 mm) and a line out, which connects to other devices. 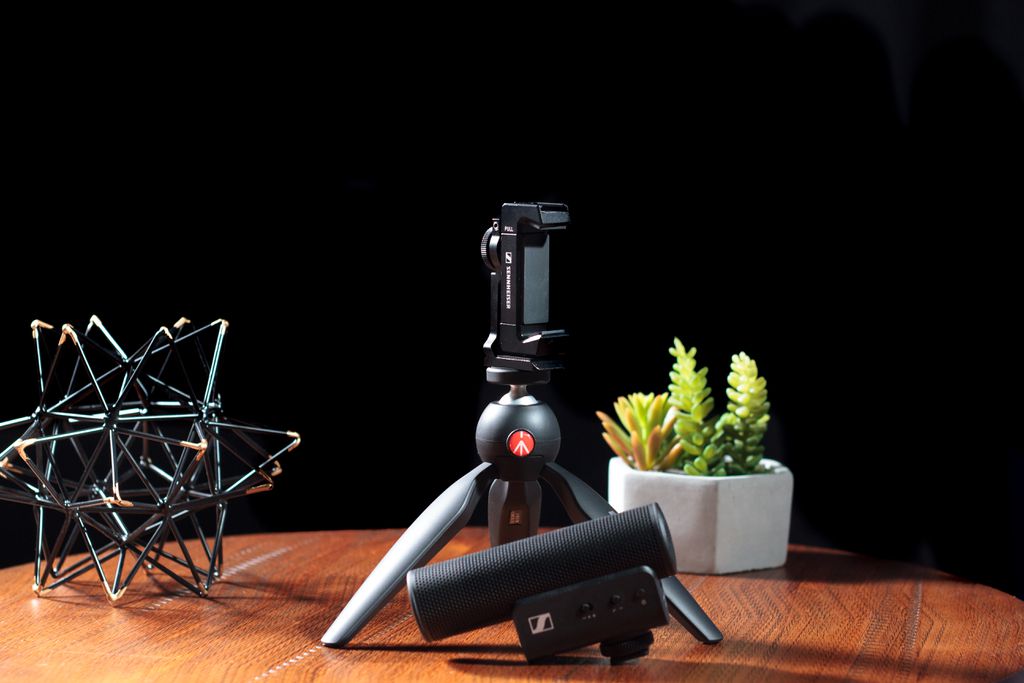 One thing that bothered me a lot about the microphone was the position of the line out output, in the front region, making with that the cable was in front of the smartphone screen — the ideal placement here would be on the back, where the battery compartment is, or on one of the sides.

Another highlight The kit is the PIXI mini tripod by Manfrotto. The piece is one of the best I’ve used, offering grip on most surfaces thanks to the rubber feet and great stability due to the folding legs. The tripod also has a spherical head — where the cell phone holder fits — with a button locking mechanism that allows you to lock the device in a specific position.

Something I missed about tripod, but I understand that it may deviate a little from its more compact proposal, was the height adjustment. Although it’s very comfortable to hold the product in your hand to record videos, its small size can be a problem if you don’t have a surface at the height of your face at the time of shooting.

Relation to the support, we have a very robust accessory, since it is made of aluminum, and it fulfills its role of keeping the smartphone secure. I have tested the accessory so much with an iPhone , more “chubby”, as with a Galaxy S20, and the experience was the same, which is excellent. In addition, the equipment also lets you rotate the cell phone for both landscape and portrait mode.

Although the focus of the MKE 400 Mobile Kit be the content creator who is always on the go, an audiovisual professional shouldn’t be too disappointed with the product. In addition to the cold shoe connector present to hold the microphone, we have threaded holes for mounting on tripods and other types of stabilizers. The tripod also supports smaller DSLR cameras, which is great.

The Sennheiser kit is very complete and, in addition to all the accessories mentioned above, there is also a noise shield to reduce the capture of winds and other noise in outdoor environments. However, one thing I missed in the package was an adapter for devices that do not have a P2 port, especially iPhones.

To perform the tests, for example, I needed to connect the microphone to a Galaxy S8+, as it was the only device here at home that had the input. Considering that the most famous content creators use an iPhone or a newer high-end Android — which no longer have a P2 connector — having an adapter in the box would eliminate the need to spend money on another accessory.

The kit offers microphone, tripod and smartphone support of excellent build quality. For completeness, only if he brought a 3.5 mm adapter for Lightning or USB-C, as most devices are currently removing the P2 input for headphones.

Sennheiser highlights that the MKE 600 Mobile Kit is aimed at content creators who are always on the move, meaning that they make videos in often noisy outdoor locations. Even so, I also noticed a potential for use indoors due to its capturing quality.

The microphone is directional supercardioid type, which means that the audio is captured directly from the part front. The sides and rear region, in turn, are less sensitive to muffle external noises.

I tested the MKE microphone 400 both indoors and I really liked the result, above the average of some lavalier microphones, generally used by those who create content at home. Using the Galaxy S8+ standard voice recorder to capture the audio, I noticed clarity in the voice, controlled noise and echoless capture.

The equipment has a gain controller with three stages: – dB, 0 dB and +37 dB. The first one is very low and I don’t recommend using it outdoors because the voice doesn’t stand out. In closed environments, this setting only works if you are very close to the microphone.

The default setting, without any gain, is the best if you intend to record at home, as it maintains the volume relatively high and does not burst. I also liked this setup in outdoor scenarios, such as parks, as it keeps the noise under control, although it is still present.

With the gain at + dB, the MKE 400 is great in outdoor locations, but only if the 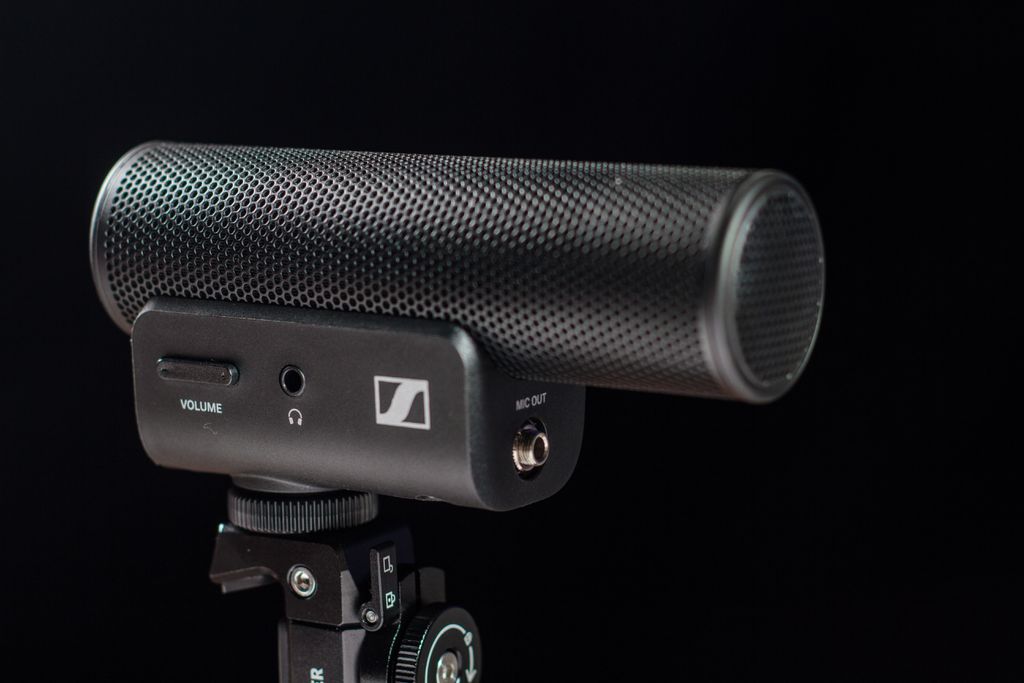 feature r is activated, as it emphasizes the mids and trebles at the expense of bass. The voice is much more defined in this mode, although it may sound a little artificial.

Another thing I really liked about the Sennheiser microphone was its ease of use; just make the connection with the smartphone for it to automatically turn on. In addition, it is still possible to monitor the audio that comes out of the equipment if you plug a headphone into the 3.5 mm jack. 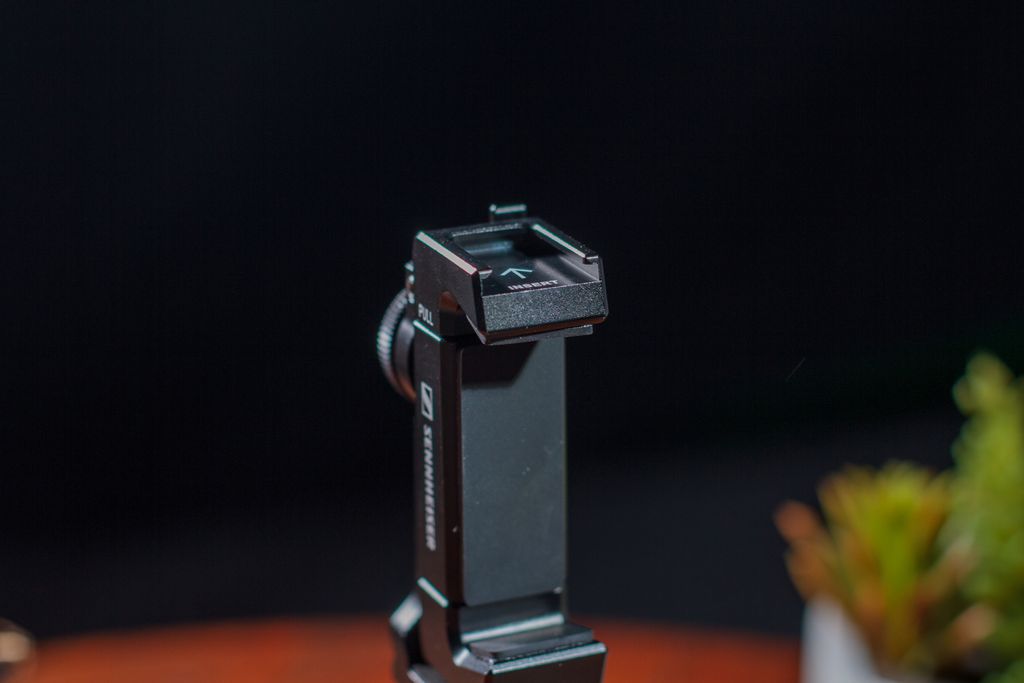 The MKE microphone 300 excels both outdoors and indoors, offering voice clarity, controlled noise and echo-free pickup. The gain controller is very useful depending on the location, but the lower stage is not very recommended outdoors because the voice doesn’t stand out. The best stage is at 0 dB, because it keeps the voice clear and the noise controlled.

The Sennheiser MKE 300 works with two AAA batteries and the company guarantees that they are enough for 67 hours of recording. It is an excellent autonomy, but far below the MKE 300 original, released on 1024, which promised 200 hours on a single AAA battery. 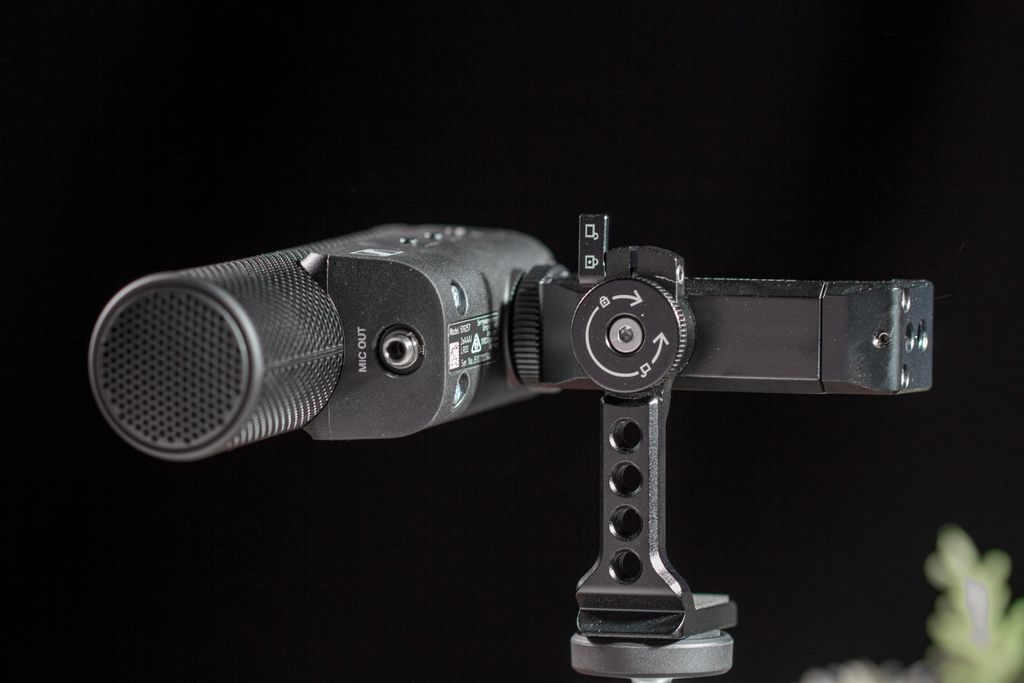 Obviously, I didn’t spend the 126 hours recording content with the MKE 300, but I had no concern for his autonomy during the time I spent with him. Still, if you are used to producing content outside the home, it’s always good to take a couple of extra batteries in your backpack.

The Sennheiser MKE 400 is a premium directional microphone that costs around R$2. 240 in the website official of the company, rising to more than R$ 2.240 if you choose the kit with the stand and the mini tripod. Of course it is not one of the most accessible directional microphones and, in addition to its overall quality, much of its value is given by the Sennheiser brand, which is synonymous with quality.

In other words, if if you’re looking for a good directional microphone and don’t want to spend that much, I would recommend looking at models from Boya, another giant in the audio industry. You shouldn’t have as superior quality indoors and outdoors as MKE 300, but they can be good options for those just starting out or on a tight budget.

Among some names are the BY-BM1024, which can be found in the range of BRL 400, and the BY-VM500, which costs between R$ 100 and R$ 220. Both are Shotgun type and can be attached to DSLR cameras and smartphones. With regard to secondary accessories, such as the stand and the mini tripod, it is also possible to find more affordable alternatives in retail. You can also buy only the Manfrotto PIXI tripod with mobile support for around R$ 200 or R$ 600, but then it doesn’t have a microphone socket on the top as we see in the German brand’s kit.

The MKE400 Sennheiser’s Mobile Kit packs three great quality products into one product: the microphone is ideal for content creators who they vlog away from home, while the stand and mini tripod offer enough strength and stability for long journeys. 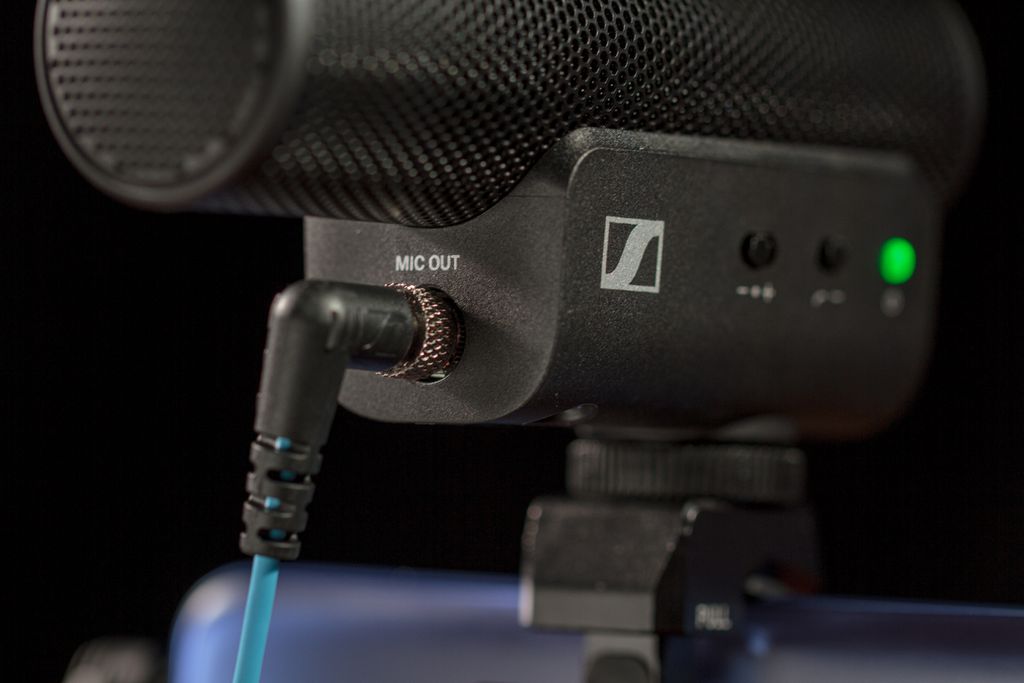 I only really missed a 3.5mm adapter for Lightning or USB-C, mainly because most premium smartphones have already abandoned the P2 connector. The mini tripod could also have height adjustment, but I understand that this could take it away from its more compact proposal. Other than that, Sennheiser’s cell phone support is very practical as it has a microphone socket on the top, something you can’t easily find in cheaper alternatives.

However, I believe its main problem is the price — at least here in Brazil. In gringa, the kit is sold for about US$ 179 (BRL 1.93 in direct conversion) and is one of the most recommended options for those who are starting in this world of content creation or looking to keep a compact setup, but with good quality.

Here in Brazil, however, the cost is about R$ 2.600 that Sennheiser requests from the MKE 300 Mobile Kit are basically unfeasible for small producers who are still not earning much money from their activity. Unless you’ve got your money down and want to start with a very high quality mic, I recommend looking at Boya’s more affordable directional mics.

So, you liked Sennheiser MKE 400 Mobile Kit? Check out the offer we have prepared for you at the link below!

The world's smallest nanolaser is thinner than a strand of hair