For many astronomers and theoretical scientists, the existence of alien life forms is a certainty, we just don’t have the technology capable of finding them. The SETI (Search for Extraterrestrial Intelligence) institute is one of the best examples of science that takes this research seriously, but the tools are still very limited, making it difficult to know where to look. A new study, however, points in some directions.

In recent decades, initiatives such as SETI have been guided by conjectures, concepts and formulas subject to high degrees of uncertainty . With this in mind, the authors of the new study proposed using some of these concepts and mathematics to simulate where and when we could find other civilizations — which, for successful contact, must be able to spread across the universe, that is, technological.

There are many factors favorable to the search for alien life, such as our very existence and the proof that there are millions of other potentially habitable planets. The problem is that not all of them could provide the conditions necessary for life to develop to the most advanced stage we know – our own. Without this development, the chances of finding “someone” are very unlikely.

The evolution of life is so slow that human-level intelligence will likely never emerge on most habitable planets. Because in the universe, there are stars that explode in supernova long before they reach a fraction of the age of our Sun. cooking” elements until the emergence of a technological civilization, which in this case is human life.

So, advanced life is more likely to appear on longer-lived planets, and not end of their habitable periods. But this brings us to many paradoxes. For example, most red giant stars with planets around them can maintain such star systems for trillions of years, and yet we humans have emerged in less than 1% of that time. Why are we so early? This is the answer that the new study tries to answer.

Some hypotheses say that very long-lived planets are not habitable for a long time, but the new article proposes that the aliens “grabby

” have been around for a long time, expanding rapidly. Within a few billion years, they will “grab” (hence the nickname “grabby

”, which means “grabbed”) the entire universe and then “suppress competitors”, according to the authors. This sets a deadline and that’s why we’re early.

To summarize the “alien model grabby

”, built on a series of previous concepts and complicated estimates, the authors assume that civilizations are born according to a series of stages, much like what happened here on Earth. These civilizations will then expand at an ordinary rate, and must alter the volume of space they occupy until they meet. Finally, they will prevent the emergence of other technologically advanced civilizations in these same volumes. The model has three parameters, summarized below.

The Dyson sphere, if it exists, could be an example of a technological alien civilization expanding and altering the space they occupy in the universe (Image: Reproduction/Capnhack/Public Domain)

Per Lastly, the team estimated that humanity is likely to encounter one of these grabby civilizations at some point in between millions to 2 billion years into the future. Before that, the chances of detecting signs of technological activity in the universe are very low. In addition, this model predicts that the proportion of civilizations migrating from silent to grabby

needs to be greater than 10. to 1 to be chances of our galaxy, in its entire history of 10, 5 billion years ago, has produced an active silent civilization.

This is certainly not good news for SETI, but the study is a major advance in terms of theory and probabilistic mathematics about alien life. In addition, there must be simpler life forms that could evolve into technological civilizations in the distant future. Finding one of them would not only be exciting, it would actually revolutionize our knowledge of the universe. 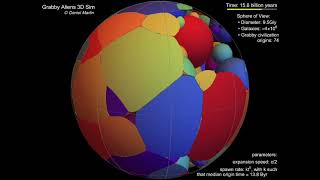