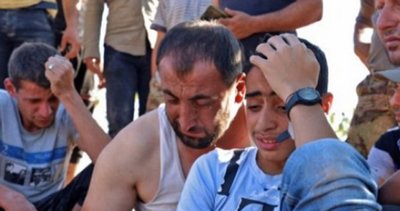 According to the information received from the Civil Defense teams, as a result of the attack on the village of Kensafra in the Cebel Zaviye region, four children lost their lives and two civilians who were injured were taken to the hospital in the surrounding area.

SITUATION IN IDLIB
At the Astana meeting held between Turkey, Russia and Iran on May 4-5, 2017, some regions of Idlib and neighboring provinces (Latakia, Hama and Aleppo provinces), the north of Homs province, Eastern Ghouta in the capital Damascus and the southern regions of the country (Dera and Quneitra) 4 “de-escalation zones” were created.

However, the regime and Iran-backed terrorists captured 3 of the 4 regions with the air support of Russia and headed for Idlib. Turkey reached an additional agreement in Sochi to strengthen the ceasefire with Russia in September 2018.

Russia and regime forces began operations to seize the entire region in May 2019 and captured several large settlements within the Idlib De-escalation Zone.

Finally, a new agreement was reached between Turkey and Russia on March 5 in Moscow.

The ceasefire, which the regime forces violate from time to time, is largely preserved. During the 2017-2020 period, approximately 2 million civilians had to migrate to regions close to the Turkish border due to the attacks of Russia and the regime forces.

Relations with Turkey are advanced

Man breaks into iCloud accounts and steals over 620,000 nudes