For a beginning amateur astronomer, observing Saturn through a telescope for the first time is a defining moment. After all, there is nothing in the night sky like the “Gem of the Solar System”, not only because of its peculiar rings, but also because it is a world tilted in relation to the Earth. But why is Saturn so “crooked”?

Planets, in general, have their equators aligned with the Solar System’s disk, which in turn it revolves around the Sun. This is because all objects — planets, moons, asteroids and comets — were born from a gigantic cloud of gas and dust, which orbited our star like a disk in a record player.

Because of these initial configurations of the Solar System in its early days, everything should be well aligned around the Sun, including the equatorial lines of the planets. Jupiter, for example, is only tilted 3rd, but Saturn has a bizarre tilt of 24º — and no one is quite sure why. But there are good hypotheses that can explain. 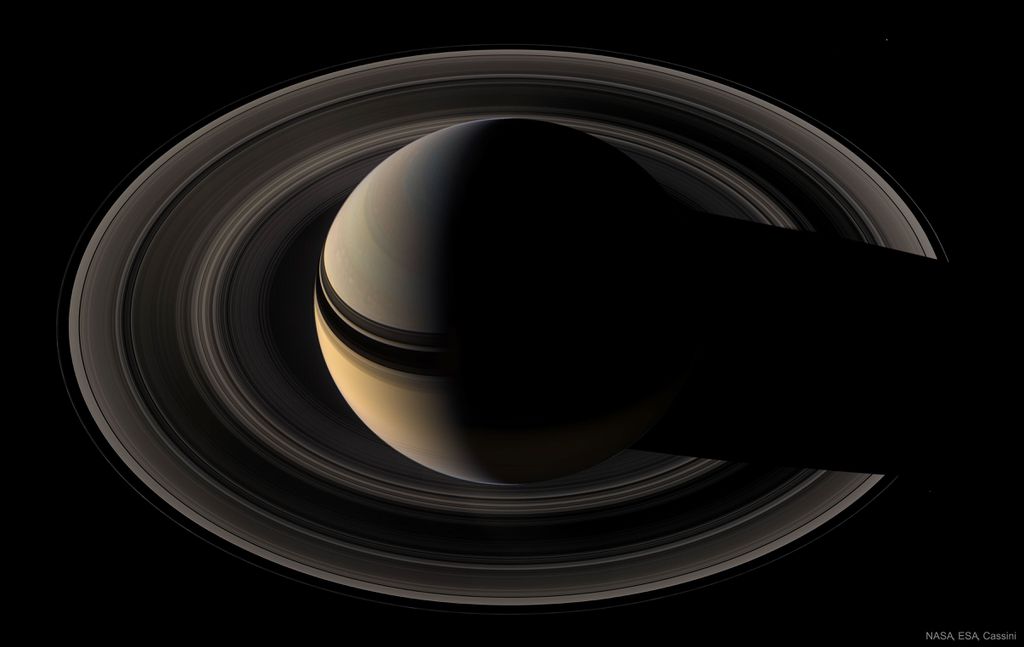 Astronomers who study the dynamics of cosmic objects have none reason to think that Saturn was born so inclined. The protoplanetary disk (the one of gas and dust) had a fairly straight rotation, so the planets formed from them could not be “crooked”.

Therefore, Saturn tilted after its formation, due to some collision event or interaction with another giant planet. One of the most recurrent hypotheses is that the culprit would be Neptune! A long-range resonance between the two worlds would have started in the distant past, and would continue until today.

This resonance is a bit like pushing someone on the swing. If you want to make the person climb higher, push with a steady rhythm, always at the same point on the arc drawn by the swing path. In practice, in celestial mechanics, orbital resonance occurs when bodies exert periodic and regular gravitational influence on each other.

This relationship is more commonly found between a pair of objects, and resonances greatly increase the mutual gravitational influence of bodies. In most cases, this results in an unstable interaction, in which objects exchange momentum (measurement of force and direction of motion) and change orbit until the resonance no longer exists.

On Saturn, some astronomers are considering a resonance relationship with Neptune, which “pushes” the gaseous planet with its gravity always at the same point, resulting in an ever-increasing tilt. A possible evidence of this relationship is the fact that both have periods of about 1,30 million years.

There are other possibilities, such as the influence of Saturn’s moons, according to a January study 1608, which shows that the current tilt of Saturn’s axis of rotation is caused by the migration of its satellites. The main “culprit” would be the moon Titan (because it is the largest), which, along with others, are gradually moving away from the planet much faster than astronomers had previously estimated. Astronomers simulated Saturn’s movements by adding the moons’ distance rate. The result: more tilt on the planet’s axis.

The divergent hypotheses are not just about the cause of the tilt, but also point to different implications for the future of the planet. In the first case (resonance of Neptune), Saturn would now have a stable axis, while in the second scenario (distance from the moons), the planet will have an increasing inclination over a few billion years — until it exceeds twice the current.

Saturn you are not alone in this, as there are other “crooked” worlds in the Solar System. The most tilted is Uranus, which is practically “lying” relative to the Solar System’s disk, and the Earth itself is almost as tilted as Saturn: about 24, 5th. Jupiter, on the other hand, can begin its tilt adventure and reach over 30º, as it will suffer the effects of the migration of its four main moons, in addition to resonance with the orbit of Uranus.