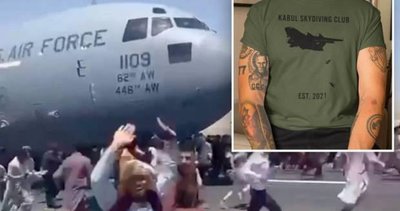 After the Taliban came to power, Afghans who wanted to leave the country climbed the wing and landing gear of the evacuation plane that took off from Kabul International Hamid Karzai Airport. The images showing those who fell from the plane shortly after take-off were met with indignation in the world public opinion.

“KABUL PARACHILI JUMP CLUB”
T-shirts depicting the silhouettes of Afghans who fell from the C-17 plane were put up for sale online for 18 euros/12 pounds.

The company called TShirt At Low Price, which is allegedly headquartered in Singapore, also has a warehouse in the USA and they sell to the whole world online.

STOP THIS SALE
While thousands of users were criticizing this initiative, a call was made to the online shopping platform where t-shirts are offered for sale, to ‘stop this sale’.

12 PEOPLE LOSE LIVES
NATO announced yesterday that 12 people had died at Afghanistan’s Kabul Airport since Sunday, the day the Taliban entered the city.

A Taliban official said on Thursday that the deaths were caused by either gunshot wounds or stampedes, and had still urged people at airport gates to go home if they did not have legal rights to travel.

Finance companies spend an average of $2 million to circumvent ransomware

How to login to other apps with TikTok account