This week, SpaceX launched the Inspiration4 mission, which took four civilian space tourists aboard the Crew Dragon spacecraft to spend three days in Earth orbit. The capsule is orbiting our planet in an almost circular orbit, 590 km from the surface terrstre — and if you’re in the right place at the right time, you can watch the spacecraft pass through the sky.

Inspiration4’s Crew Dragon completes a lap around Earth every an hour and a half, and the craft can be observed without the need for binoculars or telescopes. Although SpaceX has made available a tool that updates the ship’s position in real time, there is no detailed information for those who want to find it in the sky. But there are alternatives that facilitate this attempt at observation; then check out some sites below that provide these details according to your location.

Heavens Above is a night sky observation site that provides detailed information on the position of various objects, including the Inspiration4 ship. First, when accessing it, you need to click on the link at the top of the site to adjust your city’s configuration. 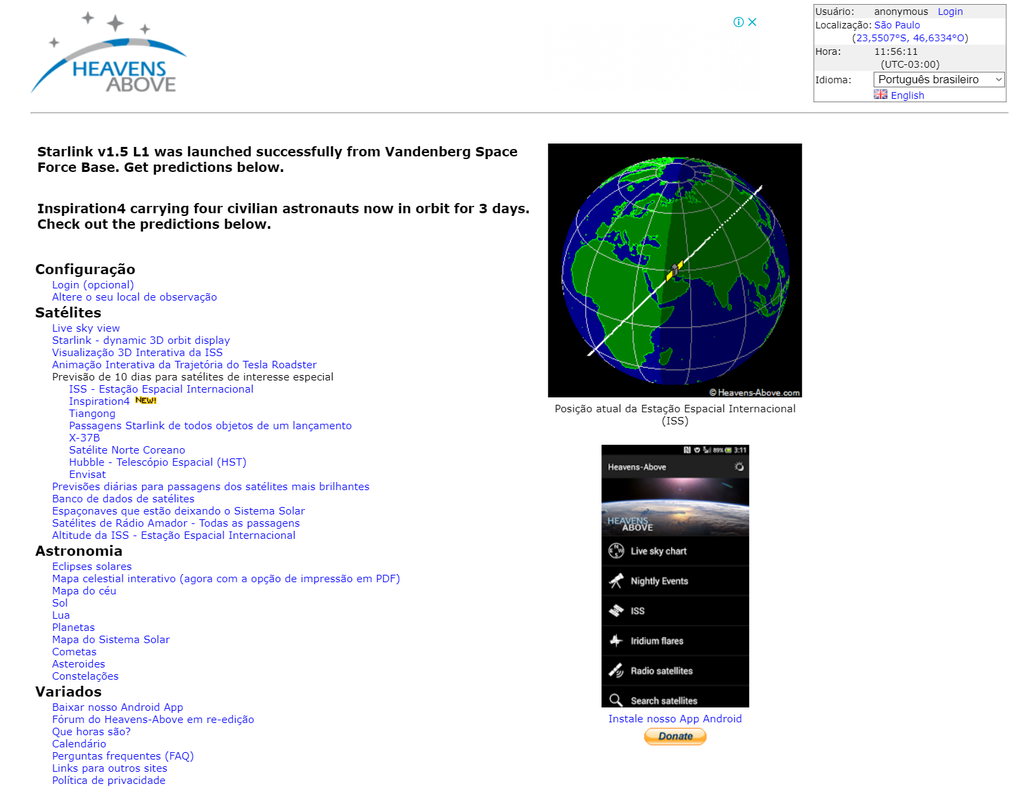 On the next screen, scroll down the page until you reach the field where you will enter your city name. Then click on “Search” and after selecting the correct location, click on the button at the bottom of the page to confirm the changes. You will be redirected to the homepage of the site.

Now select Inspiration4 on the links in blue, on the left. You will see a screen with a time interval to get the ship’s passage data, and you can choose whether you want the information for only visible passages or for all passages. After selecting an option, simply click on the desired date for details.

The next screen shows a map of a region of the sky, with indications of the constellations and the trajectory of the ship. Below the map, there is a table with the information needed to find it in the sky, such as passage times, the capsule’s altitude (indicated by the angle between the horizon, you and the object), the azimuth (the direction of the desired object in relation to the cardinal points) and the magnitude of the ship, that is, its brightness.

Remember that the brightness may vary according to the position from Inspiration4 in its orbit and from the sunlight it’s receiving — according to the site, the Crew Dragon has a maximum magnitude of approximately 1.6, which makes it as bright as the star Shaula, from the “stinger” of the Scorpius constellation, the Scorpion .

N2YO is a tool dedicated to real-time satellite tracking, which shows predictions of the passages of objects in certain regions. The site also has a map that shows the position of Inspiration4 in real time, as well as information about the next passage of the ship in relation to the user’s location.

On this page, there is a brief description of the mission, along with information such as the perigee and apogee (the closest and most distant points of the ship relative to Earth, respectively), as well as data such as the inclination of the orbit, the time it takes the Crew Dragon to complete a revolution around the Earth, among other information.

On the right side, there is a table with the information of the next passage of the ship, defined according to your location. These include the start of the azimuth, the maximum elevation and the end of the azimuth, as well as the times of each step and the total duration of the passage. The site also has a tool that shows the forecast for the passage of objects in the next ones 10 days — however, it is worth noting that Inspiration4 will return to Earth next Saturday (14); that is, you have little time to try to watch it pass in the sky of your city! The ship makes 15 turns around the planet per day, so good luck and good observation!

Caixa launches microcredit program on the Caixa Tem app; see how to use