NASA has just inaugurated a new digital platform where visitors can interact and explore the surface of Mars from the images and data obtained by the rover Perseverance and its mission companion, the Ingenuity helicopter. The team’s goal is to update it with each new journey of the Martian explorers, offering the public a perspective of what it is like to be on the Red Planet.

The first 3D platform, called Explore With Perseverance, allows you to follow the rover as if the visitor were on the surface of Mars. The interactive site is mainly made up of images taken by the rover since it arrived on the planet in February this year, as well as Ingenuity’s aerial records — plus additional records from the HiRISE camera, which is found aboard the Mars Reconnaissance Orbiter spacecraft. , in the Martian orbit.

The platform is quite simple and features basic commands, such as the rotation of the rover’s field of view, for example. Even so, it offers a variety of information such as the different angles of Crater Jezero, in which Perseverance is located, recorded by its navigation cameras and Mastcam-Z, which can “look” directly at the Sun without suffering damage. 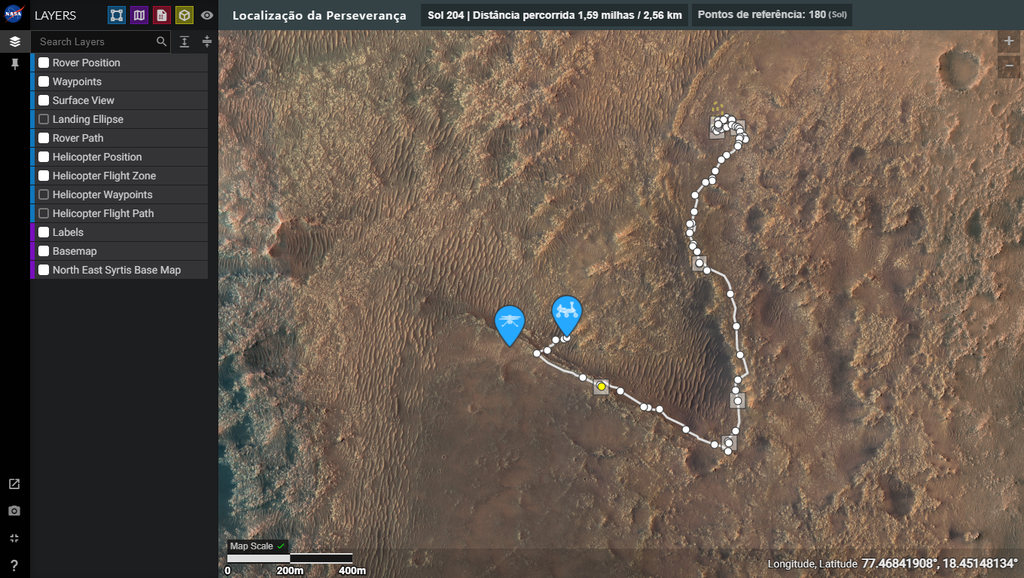 By clicking anywhere in the landscape, the platform presents, on the left side, the variety of real images of Perseverance, indicating which camera they were taken from. Visitors can select three viewing modes: 3D Terrain offers a full-scale exploration of the landscape; in image mode, only photos are seen; and Split Screen offers the two previous modes on the same screen.

Explore With Perseverance is the best reconstruction of the appearance of Mars available to the public, as explained by Parker Abercombie, senior software engineer who leads the project at NASA’s Jet Propulsion Laboratory (JPL). The platform is based on the same advanced scientific targeting tool for robotic operations (ASTTRO) that the mission’s team of scientists uses to define Perseverance’s targets.

The other interactive platform is also worth remembering of the mission, called Where is Perseverance?, which, while not as immersive as Explore With Perseverance, offers all of the rover’s displacement and the Jezero Crater points where it has already parked, as well as where Ingenuity has already taken off. The platform also features markers of the Martian day (called the sun), geographic location coordinates, and the distance traveled so far. These terrain maps allow scientists to locate interesting places to look for evidence of ancient life on Mars — and now, the visitor will be able to understand a little more of that.

Do you know what happens after making a purchase on a marketplace?