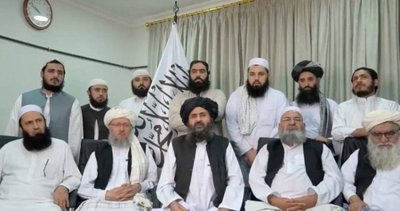 Although the decision maker is the 26-person Leadership Council, 6 people stand out in the administration of the Taliban, which is closely watched by the international community.

The Taliban, which has taken control of most of the country, including the capital Kabul, has announced that it will soon establish a new “comprehensive Islamic government”.

Mullah Abdulgani Brother, one of the prominent leaders of the Taliban, went to the capital Kabul and started to form a government.

The administration, which collapsed after Afghan President Ashraf Ghani fled the country, will leave its place to a structure shaped by the Taliban. At this point, the eyes were turned to the high-level names of the Taliban who will make critical decisions.

In the Taliban organization, apart from the leader, there are 26-person Leadership Council and various commissions that function like the council of ministers.

After the death of Mullah Omar, the founder of the Taliban and who led the group for many years, 6 people stand out in the administration.

TALIBAN IN THE PERIOD OF FOUNDING MOLLA OMER
Mullah Omar founded the Taliban in September 1994 in the southern province of Kandahar with 50 madrasah students. Having found a large following in a short time, the Taliban gained a superior position against the Afghan government of the time and other armed groups.

The Taliban first took control of Kandahar, one of the provinces where it gathered the largest fan base, in 1994. The Taliban, which captured the capital Kabul in 1996, ruled about 90 percent of the country until the US invasion in 2001.

After the invasion, the Taliban launched a guerrilla war against NATO and the newly formed Afghan government. Mullah Omar continued to rule the Taliban until his death in hiding.

It was revealed that Mullah Omar, who was born in Kandahar in 1960, died of tuberculosis in a hospital in Karachi, Pakistan on April 23, 2013. His death was confirmed 2 years later by his son Molla Yakup.

Mullah Hibetullah Akhundzade was elected as the leader of the Taliban on May 25, 2016, after the previous Taliban leader Mullah Akhtar Mohammad Mansur was killed in a drone attack by the United States.

60-year-old Akhundzade, who joined the groups fighting against the Soviet occupation in the 1980s, was the assistant of Mullah Mansur.

It is stated that Akhundzade gave religious lectures and sermons in a village near Pakistan’s Afghanistan border for 15 years until his disappearance in May 2016.

The whereabouts of Akhundzade, who is now known as the most authoritative authority of the Taliban, is unknown.

According to the news published in the American Foreign Policy magazine in 2020, while it is claimed that Akhundzade died from the new type of coronavirus (Kovid-19); This claim was denied by the Taliban.

There is only one widely known photograph of Akhundzade published by the Taliban. The Taliban leader previously served as the chief judge of the group’s judicial system.

Born in Uruzgan province in 1968, Brother belongs to the same tribe as Hamid Karzai, who became President of Afghanistan after the US invasion.

A key figure in the guerrilla warfare launched against NATO forces after the invasion, Brother is considered one of Mullah Omar’s most trusted people.

It is stated that Brother is married to Mullah Ömer’s sister and Ömer gave him the title “Brother”, which means “brother”.

Brother, one of the four founders of the Taliban, continues to serve as the deputy of the leader of the Taliban, Akhundze, and is also the group’s top executive in charge of political affairs.

Brother, who was captured by security forces in 2010 in the city of Karachi in southern Pakistan, was released in 2018 at the request of former US President Donald Trump, thinking that he would contribute to the ongoing peace talks with the USA.

Brother became the leader of the Taliban, whose name is often heard by the international community for his influential role in the group’s diplomatic and military policies in recent years.

While Mullah Brother was signing the peace agreement signed between the USA and the Taliban on behalf of the Taliban, he held high-level talks with many statesmen in the negotiations.

Brother, who has been the head of the Taliban’s political office in Doha since January 2019, spoke on the phone with Trump on March 3, 2020, as part of the US-Taliban peace agreement, becoming the first Taliban executive to meet with a US president.

In addition, Brother, who met with former US Secretary of State Mike Pompeo in Qatar in September 2020, also held diplomatic contacts in China, Moscow and Tehran, apart from the ongoing negotiations.

Shortly after Kabul came under the control of the Taliban, Brother met the cameras with other senior group members and made his first press release on the policies they would follow while governing Afghanistan. Brother, in his statement here, said that they did not expect that they would reach their goal of taking control of Afghanistan so quickly.

Abdul Hakim, the head of the Taliban’s negotiation team, is said to be one of the most trusted names by the group’s leader, Ahundzade.

Abdul Hakim was released as part of a prisoner swap from a US prison at Guantanamo in 2014 with Sher Mohammed Abbas Stanikzai, who served as his deputy in negotiations. Prior to his appointment as head of the negotiating team, he was the Taliban’s chief justice in charge of the judicial system. He was not a well-known name until he was appointed to this post.

He is known as a person respected by the members of the Taliban, who taught at the madrasahs in the city of Quetta, close to Pakistan’s border with Afghanistan.

Stanikzai was a former deputy minister in the government before the Taliban was overthrown in 2001. Stanikzai, who has lived in Doha for nearly 10 years, became head of the Taliban’s political office in Doha in 2015.

Stanikzai was initially appointed head of the Taliban’s negotiation team, but a few days before the start of negotiations, the Taliban administration appointed him as deputy to Mullah Abdul Hakim.

Mullah Yaqub, son of Mullah Omar, the founder of the Taliban, leads the group’s military operations in Afghanistan.

It is stated that after the death of former Taliban leader Mullah Mensur, the leadership of the Taliban was offered to him, but he refused it due to his young age and lack of military experience.

Yakup is also the deputy of the Taliban leader Akhundzade.

Sirajeddin Hakkani is the son of Celaleddin Hakkani, the founder of the insurgent Hakkani Group supported by the USA during the Soviet occupation of Afghanistan.

Hakkani is the current leader of the group his father founded.

The Haqqani Group, which joined the Taliban in 1995, manages the economic and military assets of the Taliban along the Pakistan-Afghanistan border.

While it was stated that the Hakkani Group supplied suicide bombers to Afghanistan; The group is blamed for some high-level bombings in the country.

The 2008 raid on one of Kabul’s luxury hotels and the attempted assassination of the then Afghan President Hamid Karzai, as well as the bomb attacks on the Indian embassy in Kabul, are among some of these accusations.

While it is stated that Hakkani is in his early 45-50s, his whereabouts are unknown.

The FBI has announced that it will reward up to $5 million to anyone who provides information that will lead to Hakkani’s arrest.

Stating that Hakkani is a “global terrorist”, the FBI announced that they guessed he was in the North Waziristan region of Pakistan.

LEADERSHIP COUNCIL, TOP BOARD
In the Taliban organization, there is also a 26-member Guide Council (Leadership Council) just below the leader. All military and political decisions are made here.

In the structuring of the group; There are also commissions operating like the council of ministers in different fields such as military, intelligence, political and economic.

Worlds 2021 | All about the League of Legends World Cup