Researchers from the Berkeley Lab in partnership with the University of California, both in the US, have developed a new type of LED that glows when stretched or compressed and doesn’t heat up. The material achieves 100% of its light emission efficiency at all brightness levels without releasing energy in the form of heat.

The technique consists of applying voltage to a thin semiconductor film so that it changes its electronic structure, causing an interaction between the energetic particles of the material. As these particles collide and cancel each other out, losing energy in the form of heat, by changing their electronic structure it is possible to reduce this probability with an almost perfect conversion of energy into light.

“It’s always more easy to emit heat than light, especially at high brightness levels. In our work, we managed to reduce the loss process by a hundred times, leading to an almost total use of energy in different conditions”, explains Berkeley Lab engineering professor Ali Javey, the study’s lead author. 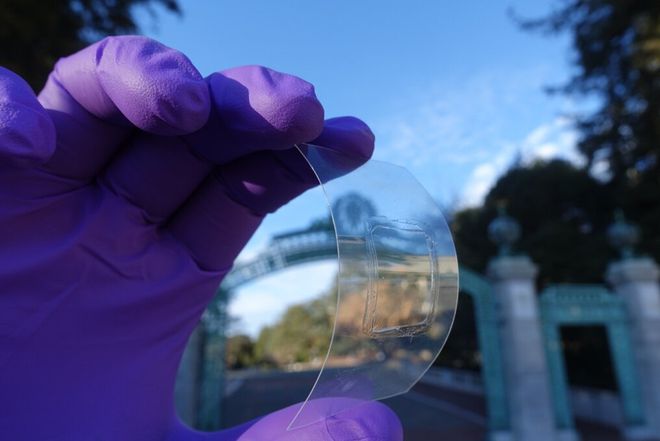 To create the new LED, the scientists used a single three-atom-thick layer of a semiconductor material known as transition metal dichalcogenide subjected to mechanical deformation. This material has a unique crystal structure, capable of creating energetic particles when their atoms are excited by the passage of an electric current.

This process gives rise to excitons, formed when semiconductor materials absorb photons of light, causing negatively charged electrons to jump from a lower energy level to a higher one, releasing that energy by emitting light or heat. It is this efficiency in radiating light instead of heat that determines the LED’s performance.

New type of LED shines more when is stretched or folded, but does not heat up (Image: Reproduction/Berkeley Lab)

To achieve a high performance in light emission, the researchers adjusted the the material’s band structure, an electronic property capable of controlling how excitons interact with each other. They placed a semiconductor tungsten disulfide film on a plastic substrate.

When bending this substrate, they applied a small amount of tension to the film, focusing a more intense laser beam to obtain a higher concentration of excitons and, consequently, a high brightness setting. With this, they found that the material emitted light more efficiently according to the voltage used.

“Squeezing and stretching the semiconductor material reduced the collision tendency at high concentrations of particles, decreasing the loss of heat and increasing the luminous efficiency of the LED. These single-layer materials are fundamental for optoelectronic applications, as they provide high brightness despite imperfections in their crystals”, concludes Professor Ali Javey

Master Berlin | Gambit is the great champion of the competition