Expecting to put its first folding cell phone on the market next to the Galaxy Fold in 2019 — Mate X — Huawei saw its plans delayed after sanctions imposed by the United States. Thus, its launch was delayed a few months and its availability was restricted to certain markets.

Already with new generations, the Huawei Mate X has been gaining refinements, and in the future your family will be able to include an even more flexible model . That’s because a patent indicates that Huawei wants to go beyond design with support for a single folding point, creating a product with four screen segments.

And well, how could this be possible? According to the patent, in its compressed form the folding cell phone would have a screen positioned beside the triple camera module, and on the back, a display segment occupying the entire surface. Instead of just opening to reveal an inner screen, even these outer segments have their own bending mechanism to join the inner panel.

In this way, the two screens also join the two internal display segments, forming a huge, extremely wide internal panel. A detail is that there would be no “selfies” camera, since the front external screen module has the main photographic system and is also “brought” to the internal display when the device is fully stretched.

It would even concentrate a main wide camera, an ultra wide camera, and possibly a telephoto for optical zoom. Despite the huge body, only two display blocks would hide battery behind its images. This is what the company already does today with its single-fold folding.

Virtual keys and new possibilities of use

According to the documentation, all screen segments are the same thickness, so placing this possible folding cell phone from Huawei stretched out on a surface would not make any unevenness evident. 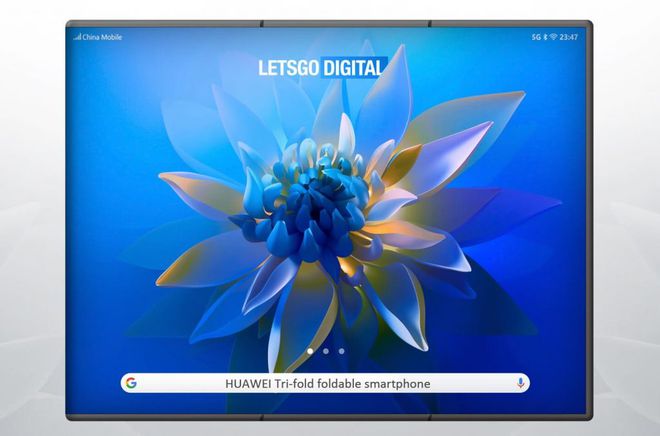 As its design prevents the insertion of physical buttons on the sides, Huawei could choose to put them in the hoop above the edges. However, you should end up opting for virtual keys in the fold of the first screen — with a single physical button hidden on the body to turn the smartphone on and off.

Remember that the patent registration does not indicate release imminent. Huawei may be looking for just one way to preserve intellectual rights. And even if a new Huawei Mate like this hits the market, it could take some time — and of course, cost a lot for those interested.