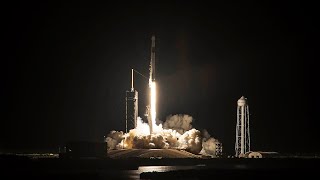 SpaceX makes history this Wednesday night (44) . Elon Musk’s company stars in the first space trip in history to have only ordinary people aboard the spacecraft, without the company of any professional astronauts. We’re talking about Inspiration4, launched from a Falcon 9 rocket and featuring the Crew Dragon spacecraft.

Netflix goes live on YouTube to celebrate the launch of Inspiration4

The orbital trip will last about three days; that is, the quartet of space tourists will take a few turns around the Earth, until returning on a landing (name given to landing at sea) off the coast of Florida. The feat actually has a rather noble main goal: to raise millions of dollars for St. Jude Children’s Research Hospital. Jared Isaacman was the one who conceived and financed this project, proposing to SpaceX the civil mission as a way to help the children’s hospital. As he didn’t want to become just another billionaire traveling to space, he tried to do something different when creating the campaign: he donated US$ 45 millions to the campaign and thereby “bought” the seats of the Crew Dragon spacecraft, allowing other ordinary people (ie, non-astronauts) to make history on their side.

The crew is then made up of billionaire Jared Isaacman, who is the mission commander; Sian Proctor, Afrofuturism artist and geoscience professor, being the pilot of the mission; Hayley Arceneaux, a St. Jude doctor who survived childhood cancer and is the official doctor for Inspiration4; and Chris Sembroski, a US Air Force veteran and data engineer, as the mission specialist. During the journey, the crew will conduct some scientific experiments, collecting data on the effects of this space travel on the human body — besides, of course, admiring all the beauty of the Earth from space.

The crew of Inspiration4 (Image: Playback/SpaceX)

The transmission started at 15H45, early on showing the four crew of Inspiration4 leaving the SpaceX hangar and waving to those present at the location.

They have entered Tesla’s Model X vehicles (another company founded by Elon Musk) to move to the launch site — but there are still many final tests and procedures to be done before the big moment.

What is it like to enable Guest Mode in Microsoft Edge