Samsung has launched, along with its entire folding line, the Thom Browne edition of the Galaxy Z Fold 3. The version based on the tastes of the American fashion designer is available for a price of 3,449 dollars (R$ 18,716 in direct conversion) — in other words, almost double compared to the already expensive Galaxy Z Fold 3, at 1,799 dollars (BRL 5,398)

The special model had its unboxing published by YouTuber Danny Winget, who showed a box full of sophistication, with all the main accessories that may come with the device: Galaxy Buds 2 headphones, S Pen stylus and Galaxy Watch 4 watch. comes with the characteristic stripes in blue, white and red, just as it was with the Galaxy Z Fold 2, which also received this limited version last year.

Elegance from the opening of the box

Right at the start of unboxing, you can see an impressive attention to detail, as highlighted by Winget. The box slides open to the side, and the inside of the lid is decorated with a striped look; all with the highest quality materials. Inside the box is a letter from Samsung thanking you for purchasing the product kit.

All major accessories come in the same box, but each in its own compartment (Image: YouTube/Danny Winget)

Below the compartment where the products are, there is a sliding bottom that reveals exclusive covers for the Galaxy Z Fold 3 and Galaxy Buds 2, as well as bracelets for the Galaxy Watch 4. These protections have a custom texture, and also bands in three colors .

Each compartment is thought of in detail

On the Galaxy Z Fold 3 box, even the package that contains the SIM card tray remover comes in the same gray and white striped pattern, and the USB-C cable has Thom Browne-branded tips. The device itself is white — the Galaxy Z Fold 2 Thom Browne Edition was gray — and now the tricolor stripe wraps around the back panel instead of appearing vertically as it was on the previous model.

New generation, on the right, has a lighter tone on the back (Image: YouTube/Danny Winget)

Samsung’s limited-edition foldable smartphone features a unique Android system theme, with a striped wallpaper, new icons and other small details. It has very similar specs to the regular Galaxy Z Fold 3, with the only difference in storage, as the Thom Browne Edition comes exclusively in the 512GB version.

The Pen that comes with the product is also exclusive, due to its white coloring (the common model is only available in black). The version that comes in the box is the S Pen Pro, which differs from the Fold Edition pen as it is larger, has a Bluetooth connection and is compatible with other branded devices, in addition to other distinctions.

The Galaxy Buds 2 case also has a white gray striped inner package, which contains a cable with details similar to the charging connector. The product itself is white, with exclusive details and a textured matte material case.

The Galaxy Watch 4 smartwatch comes with a bracelet with details in the three colors that are characteristic of the edition, and also predominantly white material. The watch has unique faces bearing the name of Thom Browne and the circular charging base features the same color pattern.

The full video can be seen below: 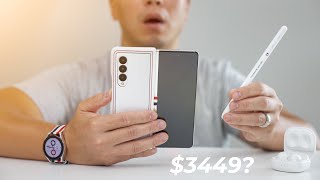