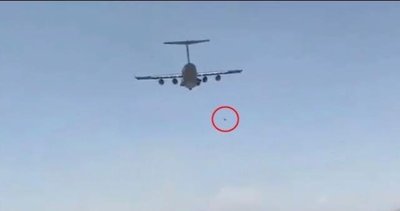 Afghan Journalist Tariq Majidi, describing the moment of falling from the plane of citizens who wanted to escape from Afghanistan, said, “A sudden sound like an explosion was heard. No one could have thought or imagined that this could happen in real life.”

After the Taliban entered the capital Kabul, thousands of Afghan citizens flocked to Hamid Karzai Airport to leave the country. Afghan Journalist, on the other hand, presented a tragic and terrifying image to the world.

He published the images of 3 Afghans who were holding on to the plane that took off from the airport and died by falling from the plane. Journalist Majidi evaluated those moments, his feelings and the latest developments in Afghanistan to İhlas News Agency correspondent Mevlüt İşli.

Stating that the incident in Kabul was quite tragic and shocking, Majidi said, “It has affected both our people and people all over the world. “They flocked to the airport in order to save their lives, to have the opportunity to escape from the United States. Unfortunately, when this tragic event took place, some tried to hide themselves in the wheels or wings of an American plane.”

Stating that he went to the scene to get information from the Afghan people, Majidi said, “What happened? A sound similar to an explosion was heard all of a sudden. When I asked the locals, they said that when they went outside to understand what was going on, they realized that a young Afghan man had fallen from the plane and died. This is a journalist. “It was quite shocking for me, and of course for other people in Afghanistan or other nationalities using social media,” he said.

“WHEN I WAS IN AFGHANISTAN, I RECEIVED MANY DEATH THREADS AND UNKNOWN, SUSPICIOUS CALLS”
Saying that he had to leave his country due to security concerns, Majidi noted that he is currently leaving Afghanistan because many journalists are worried about their lives.

Can drones replace satellites and fireworks?

What is different about the hardware of a 5G cell phone?