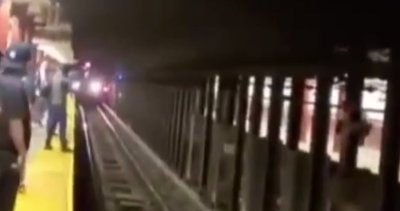 The passenger, who lost consciousness and fell on the rails at a station in New York, USA, was rescued seconds before the arrival of the subway with the intervention of the police.

It was returned from the brink of disaster in a subway station in the Bronx region of New York City, USA.

The 60-year-old passenger at the station lost consciousness and fell facedown on the tracks.

Seconds before the metro approached the station, the police rushed to the aid of the passenger.

As a police officer descended on the tracks, other officers rushed to the head of the platform, flashing their flashlights to signal the expected subway to arrive at the station.

Meanwhile, while the police officer on the rails managed to get the passenger to the platform, seconds later the subway approached the station. The rapid response of the police saved the passenger’s life.