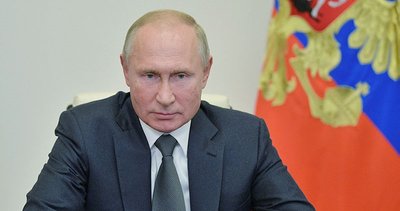 Russian President Vladimir Putin, in his meeting with German Chancellor Angela Merkel, stated that the Afghanistan issue was discussed as a top priority and said that it is an important issue to prevent “terrorists from entering neighboring countries disguised as refugees” from Afghanistan.

Putin described US and NATO policies and operations in Afghanistan as “unsuccessful”.

The last stop of German Chancellor Angela Merkel’s overseas visits before the end of her term was Russia. Russian President Vladimir Putin arrived with flowers to meet Merkel, who was on her last visit to Moscow as German Chancellor.

German Chancellor Angela Merkel continues her last overseas visits as her term of office is about to end. Merkel, who was welcomed with an official ceremony in Moscow, where she came to meet with Russian President Vladimir Putin, met with Putin in the garden of the Kremlin Palace. Leaving flowers at the Monument to the Unknown Soldier in the garden of the Kremlin Palace, the duo then went to the Kremlin Palace and held a press statement. Russian President Putin, on the other hand, came to the meeting with Chancellor Merkel with flowers before the press conference. Before the meeting, the two exchanged warm messages in their statements.

In his statement, Russian leader Putin emphasized that Germany is one of the main partners for Russia, both in Europe and in the world, and emphasized the increasing trade between Germany and Russia.

German Chancellor Merkel, on the other hand, said that this was a working visit as well as a farewell visit, adding that they would discuss issues such as Afghanistan and Libya with Putin. In her statement, Merkel mentioned that there are differences of opinion with Russia from time to time, “Although we have disagreements, it is useful to talk to each other.”