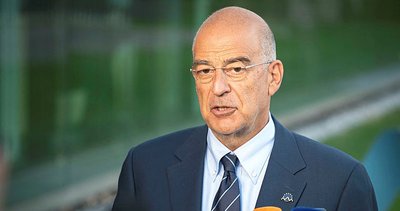 Greek Minister Nikos Dendias spoke at the joint press conference he held with his Libyan counterpart, Necla el-Mengush, where he met in Athens.

Emphasizing that the Prime Minister Kiryakos Mitsotakis government’s frequent meetings with Libyan senior officials point to the importance given to bilateral relations, Dendias said, “Unlike other countries in the region, Greece is not trying to turn back time and turn Libya into a de facto colony of foreign interests.” claimed.

Claiming that Libya is neighbor to Greece and noting that Libya’s stability affects the whole region, Dendias argued that they are making efforts to improve not only bilateral relations but also relations between the European Union (EU) and Libya.

ELECTIONS TO BE HELD IN LIBYA ON DECEMBER 24

Dendias stated that they attach importance to the protection of Libya’s independence, sovereignty and territorial integrity, and pointed out the importance of the successful completion of the elections to be held on 24 December in this context.

“We hope (these elections) will bring out a government in Libya that can shed the burdens of the past, such as the invalid, baseless and illegal ‘Turkey-Libya Agreement’.” Dendias said, reiterating Athens’ claim that this agreement is a violation of international law.

El-Mengush, on the other hand, underlined the importance of Libya’s stability in maintaining stability and peace in the Eastern Mediterranean and the region, including Greece, and invited Greece and the EU to help Libya by offering cooperation tools necessary for security and stability.

Saying that they want to cooperate with Greece and the EU on asylum seekers, the Libyan Minister thanked Dendias for Athens’ sensitivity on this and other issues.

How to play Civilization VI