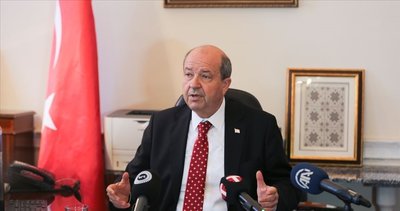 Tatar, who met with the Cyprus Peace Operation veterans living in Kütahya for dinner at a restaurant, said that he was greeted with enthusiasm everywhere he went in the province, where he participated in various programs for two days.

Stating that the love of the Turkish people for the TRNC will continue forever, Tatar emphasized that the Cyprus veterans have always been a crown jewel for them.

President Tatar stated that the history of the region changed when Turkish soldiers set foot in Cyprus on July 20, 1974, and said:

“The Turkish Cypriot people have gained their independence and freedom. Today, as we continue on our way as a great nation in the protection of our rights and law in the ‘Blue Homeland’ for Turkey’s security in the Eastern Mediterranean, we are reminded how important the survival, future and security of the Turkish Republic of Northern Cyprus is. On such a day of love, I would like to express my gratitude to you once again. Because you had that courage, sacrifice and heroism that put itself forward at the cost of being a martyr as a result of the duty assigned at every point, with the most important dimension of being a nation. Türkü has always waited for July 20. The biggest answer to those who say, ‘I waited but you did not come’, we continue on our way with independence, freedom, and now the Turkish Republic of Northern Cyprus, after our heroes set foot on the island on the morning of July 20. It is impossible to forget them.”

Tatar explained that some of the Cyprus veterans settled in the TRNC after 1974 and continued their lives.

Reminding that he met with veterans wherever he went in Turkey, Tatar stated that the veterans expressed their gratitude by sharing their contribution to that great struggle.

Reminding that he met with veterans during his visit to the Bozkurt district of Kastamonu last Friday, Tatar made the following assessments:

“Wherever they are in Turkey, the Cyprus veterans are in our hearts, they are our crown jewels. Because after the 1974 Peace Operation, no one’s nose bled in Cyprus, that atrocities, captivity, and yoke have all been left behind, and as a result, peace still continues in Cyprus today. Peace has come not only for the Turks, but also for the Greeks, because before the Turkish military landed on the island until 1974, there were years of conflict, people died and the conflict continued, until the Turkish soldier came to Cyprus and brought peace. There is peace in Cyprus. The Turkish military will always continue to exist in Cyprus in order for it to be possible.

After the dinner, gifts were presented to President Tatar by Cypriot veterans.