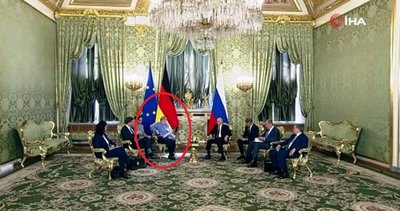 Chancellor Angela Merkel, who is on her last visit to Moscow as the German Chancellor, was on a phone call during a meeting with Russian President Vladimir Putin.

German Chancellor Angela Merkel met with Russian President Vladimir Putin in Moscow, the capital of Russia, the last stop of her overseas visits as her term of office was about to end. After the meeting at the Kremlin Palace, Merkel’s mobile phone rang while the two leaders were making a statement to the press.

When Putin began his speech to greet Merkel, the ringing of the phone could be heard in the hall in the Kremlin. It turned out that Merkel forgot to turn off or mute her phone. While Chancellor Merkel took the phone out of her pocket and hung up, Putin continued his speech without interruption.

Warm messages were given mutually during the meeting where Russian President Putin came with flowers before the press statement. In his statement, Russian leader Putin emphasized that Germany is one of the main partners for Russia, both in Europe and in the world, while emphasizing the increasing trade between Germany and Russia. German Chancellor Merkel, on the other hand, said that this was a working visit as well as a farewell visit, and stated that they would discuss issues such as Afghanistan and Libya with Putin.