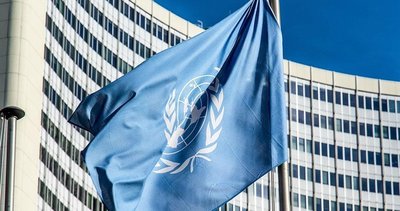 In his post on his Twitter account, Guterres noted that he closely followed the developments in Guinea and strongly condemned the takeover of the administration at gunpoint.

The UN Secretary General called for the immediate release of President Alpha Conde, who was detained by the putschists.

Gunshots were heard in the morning from the Kaloum region, where the Presidential Palace Sekoutoureya and administrative buildings are located in Conakry, the capital of Guinea.

A few hours after the incident, a video was circulated on social media in which Colonel Mamady Doumbouya, head of the Special Forces Units (GFS), made statements about their takeover of power.

At the same time, images of President Conde being detained by the soldiers were shared.

In the video, Conde is waiting in a room with a group of soldiers, and one of the soldiers says to the exhausted Conde, “We didn’t even touch a strand of your hair, did we?” It was seen that he asked the question, and Conde did not answer.

THE NAME OF THE JUNTA “NATIONAL UNITY AND DEVELOPMENT COMMITTEE”

Shortly after the images appeared on social media, a group of soldiers led by Doumbouya went to the state television RTG and read the coup statement on live broadcast.

Doumbouya announced that they took over the administration due to the bad situation in the country and established the National Unity and Development Committee (CNRD).

Noting that the government, the constitution and public institutions were abolished, Doumbouya said that air and land borders were closed.

THE NAME BEHIND THE COUP FROM THE FRENCH FOREIGN LEGION

It has been known that the Conde government had some disagreements with Colonel Doumbouya over the structure of the GFS.

Doumbouya was appointed head of the GFS, created by Conde, in 2018 after serving for a time in the French Foreign Legion.

On July 19, 2011, a coup attempt was made against President Alpha Conde and his residence was attacked with rockets.

President Conde was elected president for the third time on October 18, 2020, with 59.49 percent of the vote.

Conde, who was elected for a five-year term in December 2010 with the first democratic power change since the country gained its independence in 1958, was re-elected to the presidency in 2015.

In the country where the President can serve for a maximum of 2 consecutive terms, the constitutional amendment referendum, which will allow Conde, whose second term ended in December 2020, to be elected for the third term, was held on March 22, 2020.

83-year-old Conde’s candidacy for the third term became the most discussed agenda item in the country.

Tesla Cybertruck is postponed once again; this time in over a year