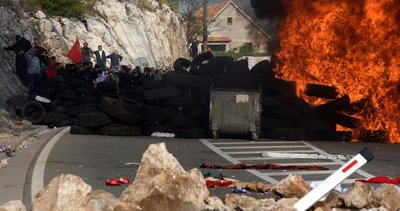 In Montenegro, a total of 50 people, 20 of whom were police officers, were injured in the protests that broke out after the Serbian Orthodox Church’s decision to hold the enthronement ceremony of Montenegrin Metropolitan Joanikije in the country’s historical capital, Cetinje.

A protest was held in Montenegro for the enthronement ceremony of the Serbian Orthodox Church, Montenegrin Metropolitan Joanikije, in the country’s historical capital, Cetinje.

Thousands of people opposed to the accession ceremony blocked the Podgorica-Cetinje road with tires, containers and stones in order to prevent church officials from coming to the ceremony.

The police, who tried to clear the road, responded with tear gas to the crowd, while the demonstrators responded with stones, bottles and firecrackers.

A total of 50 people, including 20 police officers, were injured in the incidents.

It was reported that Serbian Orthodox Church Patriarch Porfirije and Montenegrin Metropolitan Joanikije arrived in Cetinje by helicopter to attend the ceremony under intense security measures.

Google Duo is the newest app to gain the Material You look; see how it turned out