The Suicide Squad, the group that had its most famous phase with screenwriter John Ostrander, had a monthly title in DC Comics and many of the faces that participated in the first film, by David Ayer, have long been known to the general public. For DC Films’ second feature, James Gunn prepared tributes to the classic team, but he insisted on turning over the cheesiest — and fun — side of the publisher. To do this, he was also inspired by another team formed by villains, the Secret Sexteto.

While references to Ostrander already appear in the trailer and at the very beginning of The Suicide Squad, with the doctor who implants an explosive in Savant’s head, the violence and sarcastic humor, as well as some characters, directly refer to the Secret Sextet of writer Gail Simone.

Like the Suicide Squad, the Secret Sextet uses government coerced villains and a team for unconventional missions. Simone’s idea was to recreate a team of eponymous operatives from the Silver Age of comics, and reinvent it in a similar footprint to the Ostrander stage, but with its own charm.

It is worth noting that Gunn’s inspiration in this team was even more explicit with the credits of the film itself, which makes a point of remembering that Simone co-created some of the characters used in the plot. And even the author herself insisted on highlighting on Twitter: “Damn, The Suicide Squad makes me want to write more about the Secret Sexteto.”

But who is part of the group? What’s your story? That’s what we’ll see below.

Original team was formed by spies from the Silver Age

The original Secret Sextet was a Silver Age spy team that had a mysterious boss named Mockingbird. It was a mix of the plots of 007 with As Panthers; and that original concept did get a revival in 1988, but it didn’t last long. The version that inspired The Suicide Squad comes from the early 2000s, when DC Comics started to highlight its large gallery of villains, from the most cheesy and unknown to the most popular.

During the phase called United Villains, writer Gail Simone and artist Dale Eaglesham took advantage of the original group’s raw and “less heroic” tone to revitalize the Secret Sextet with a touch of John Ostrander’s Suicide Squad. Thus was born a new team of villains, which, similar to the Suicide Squad, was initially recruited for a highly dangerous mission. The mocking tone of the plot and the dynamics between the characters, who were always fighting each other all the time, was also a point of contact between the two teams. 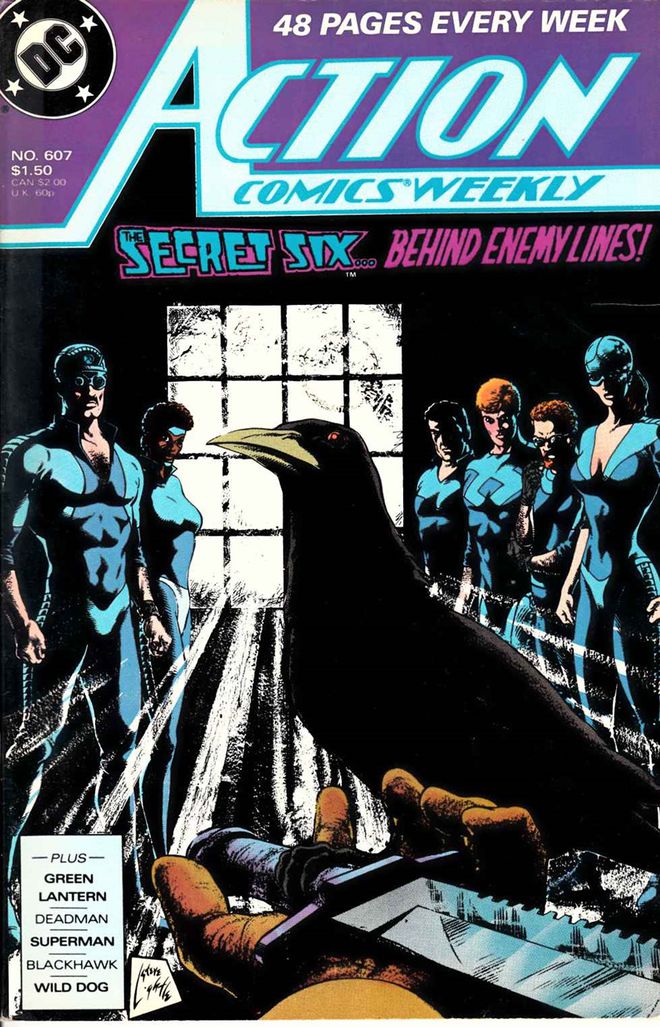 The original team, which won a revival in the late 1980s (Image: Reproduction/DC Comics)

However, the Secret Sextet gradually gained its own charm, and, unlike the “suicides”, the team soon broke away from its contractors to act on its own. The group was formed by Pistoleiro, who was once again popular and even appeared in David Ayer’s film Esquadrão Suicida; Catman, a Batman rogue villain who was born to be a male version of Catwoman; Puppet of Cloth II, successor of a character of the same name from the Golden Age of comics; and Scandal, daughter of the famous immortal Vandal Savage, famous antagonist of Justice League stories, among others.

Simone and Eaglesham’s limited series was quite successful because in the 2000s it echoed that banalized ultraviolence style of Quentin Tarantino and Guy Ritchie in cinema at the time, with films such as Pulp Fiction – Times of Violence and Games, Cheating and Two Smoking Barrels. This tone, combined with the sarcastic humor and the lewdness of the characters, won over readers. So, what would only be a working title became a monthly magazine.

And Simone did more: the Cat-Man became more relevant, as one of the best hunters in the DC Comics pantheon; and Escândalo became a very interesting character, perhaps the first openly queer character in the publisher’s Multiverse, before the end of the 2000s.

Secret Sextet not so secret

Throughout the plot, we learn that the new version’s Mockingbird was none other than Lex Luthor, who had been manipulating the “Series Z” bandit group while organizing his Secret Society of Supervillains. After breaking out of Luthor’s clutches, the Secret Sextet began recruiting more famous faces like Bane, Harlequin, and King Shark—the latter two are in The Suicide Squad.

With the magazine’s success, references to the Suicide Squad became increasingly present and even the original team showed up, bringing back Amanda Waller and the writer from her most famous phase, Ostrander, for a crossover with the Sextet Secret. One of the most famous plots of this phase was when the group discovered a “letter of freedom” from Hell, which saves the bearer from eternal damnation. This attracts several other supervillains and what you see in the magazine’s pages is a real bloodbath. 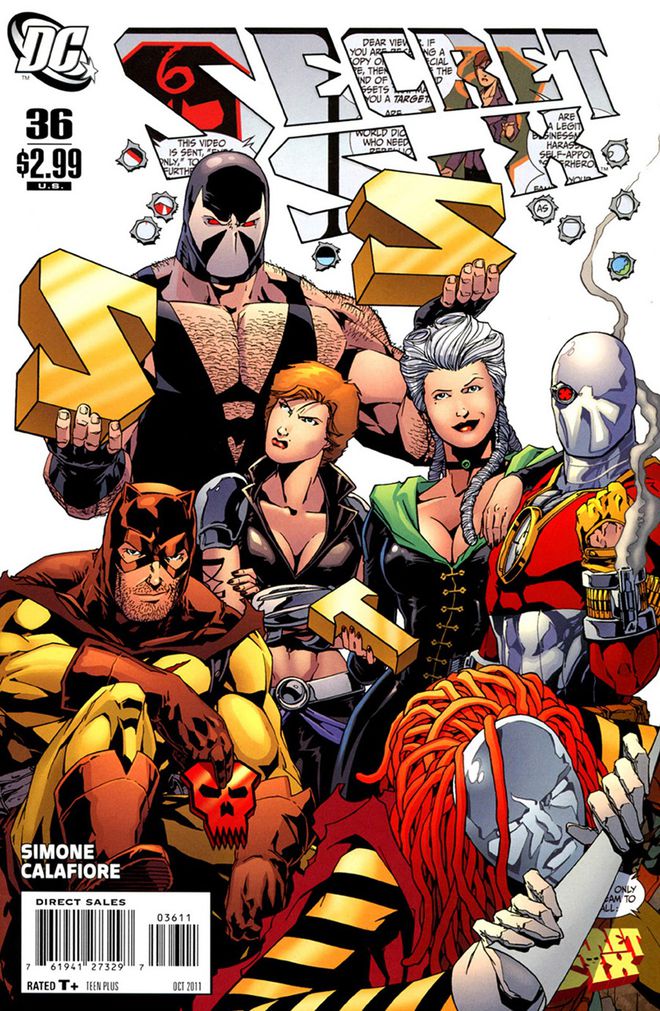 Later, Bane becomes the leader of the Secret Sextet and the King Shark also gains more relevance, but a mission that involves the murder of several characters linked to Batman becomes disastrous and decrees the end of the team. The group even gained a new revival, already in 2014, also at the hands of Simone, but it also didn’t last long and ended the work definitively (at least for the time being) in 2016.

Attention below there are spoilers about the end of The Suicide Squad!

In addition to a mocking tone more similar to Simone’s Secret Sextet than to Ostrander’s Suicide Squad, James Gunn’s film also brought together some characters and a dynamic that more closely resembles the sextet’s work. Furthermore, the end of the film evokes a lot what happened with the team and Lex Luthor in the pages of the magazines. 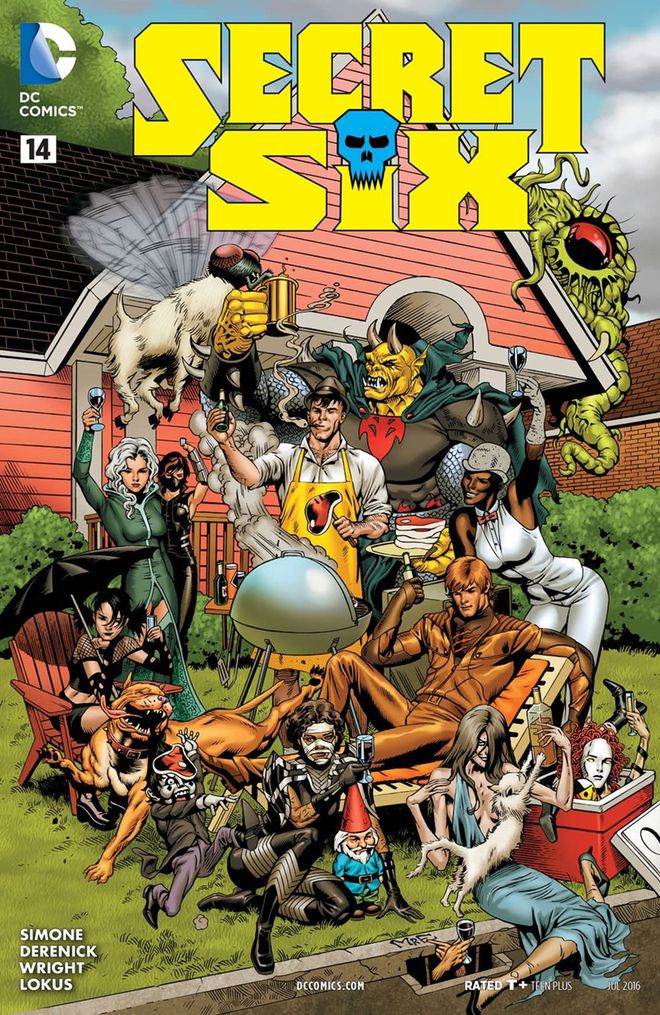 Just as the Secret Sextet managed to escape Lex’s clutches and become an independent operative team, so does Gunn’s Suicide Squad after the team defeats the alien villain Starro. Task Force X manages to break free of Amanda Waller’s control, leaving it free to act in freedom.

This ending not only gives ideas for a return of the Secret Sextet in the comics — something Simone herself has already considered, as she said at the beginning of the text — but also opens up the possibility for a sequel to The Suicide Squad. But that probably shouldn’t happen, because the plot wasn’t born to have a sequel, and, well, the ending ends the group’s journey well.

Owner of TikTok plans to release her own Aliexpress

Review Metroid Dread │ A return with open arms for the new

No salary for paralympics: Rajasthan Paralympic gets salary after many months