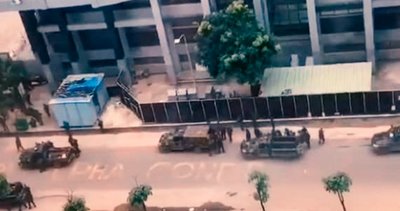 The coup claims in Guinea shocked the world press. Heavy gunfire was heard in the center of Conkary, the capital of Guinea. While no official statement was made on the subject, it was stated that the soldiers surrounded the palace.

It was stated that the only bridge connecting it to the Kaloum neighborhood, which is home to most of the ministries and the presidential palace, was closed and many soldiers, some of them heavily armed, were placed around the palace.

THE PALACE IS WRAPPED AROUND

Gunshots were reported near the presidential palace in Guinea.

In the news in the local press, it was recorded that automatic gunfire came from the Kaloum region, where the presidential palace and administrative buildings are located in the capital Conakry, at 08:00 local time.

In the news, it was stated that the soldiers went down to the streets, the entrances to the city center were closed and there were wounded soldiers.

While the possibility that the incident could be a coup attempt was emphasized, the official authorities have not yet made a statement on the subject.

The French press wrote that the incident was a “military coup attempt”.

US President Biden’s call to North Korea: Anywhere and anytime…

How to Watch Picture-in-Picture Video on Microsoft Edge