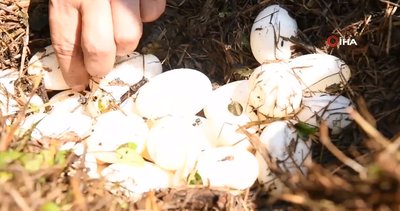 Chinese crocodiles, which are protected and artificially reproduced as critically endangered, have begun to hatch. The Chinese crocodile, which is a unique and rare species, is under first-class special state protection in the country.

The approximately 2-month incubation period of Chinese crocodiles, which are protected and artificially reproduced as they are classified as critically endangered, has ended.

Chinese crocodiles in the Anhui Chinese Crocodile National Nature Reserve in Xuancheng city of Anhui province in eastern China began to hatch after the incubation period.

After spawning, which starts from June 25, all incubation processes are expected to be completed by mid-September.

Judging by the number of eggs, it is estimated that more than a thousand Chinese crocodiles will hatch.

Xia Tongsheng, an official of the Anhui Chinese Crocodile National Nature Reserve Administrative Bureau, said in a statement, “Chinese crocodiles laid their eggs from late June. Currently, these eggs have begun to hatch after an artificial incubation period of more than 50 days. More than a thousand baby Chinese crocodiles are expected to hatch. ” said.

With Katy Perry and Post Malone, Pokémon CD gets date