It’s another Saturday and with it, a new selection of astronomical images handpicked by NASA! This week, you’ll find varied images ranging from a curious phenomenon, which seems to form “colored flames” in the sky, to a fresh image of Mars, which shows a very important rock at its center.

Also take advantage of the other images to check out a little about other interesting objects, including a very colorful record of the Moon, which is close to us, or others farther out in space — the Whirlpool Galaxy is one of them, which appears in an image interacting with your neighbor. 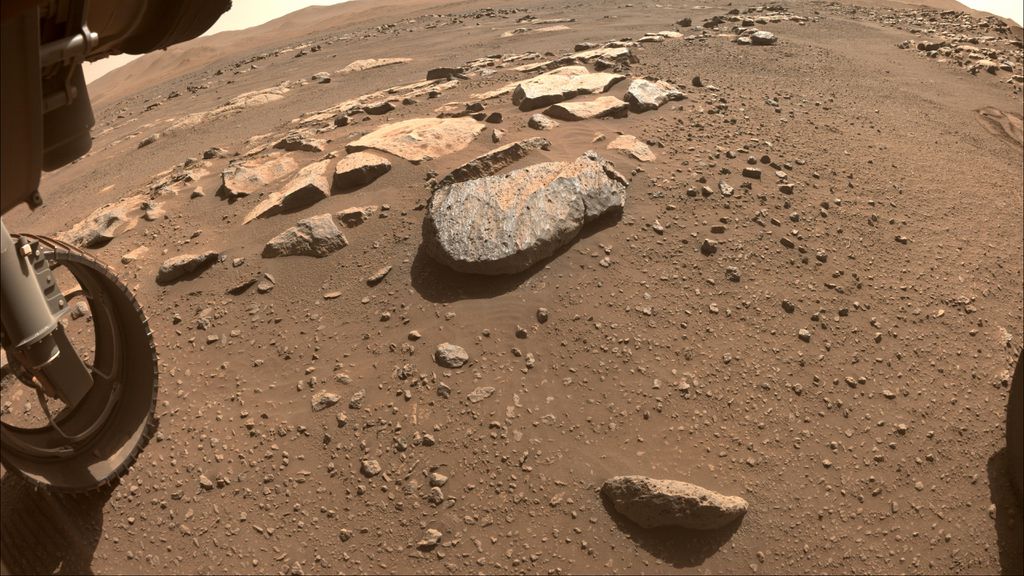 On August 22nd, the Perseverance rover used the Hazard camera to take the image above, which shows an important detail inside the Jezero crater: the rock in the center of the image. It is a formation nicknamed “Rochette”, which measures 52.5 cm and was tested by the vehicle for the mission team to check if it would be possible to collect a sample of it, which would be a little thicker than a pencil.

When it made its first collection attempt, Perseverance tried to obtain a sample of a rock so brittle that it crumbled and could not be stored. So, to avoid another “fright” of the sort, the team used the Mastcam-Z system to analyze images from inside the sample tube, while the rover paused the collection sequence while the scientists checked the image to ensure that there really was a rock core inside the tube. Everything went well and the tube will be sealed to, in the future, be taken to Earth through a mission carried out by NASA in partnership with the European Space Agency. 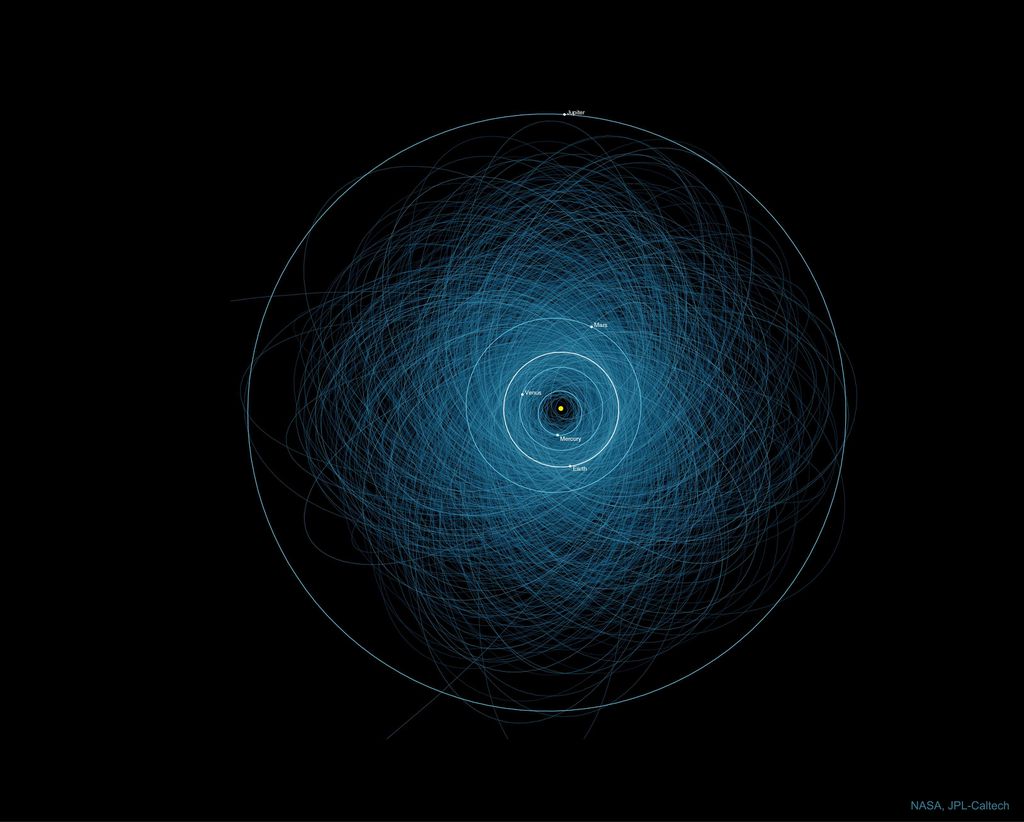 Sure, some asteroids are indeed considered dangerous, but none of them are expected to hit our planet for the next 100 years at least. Even so, as the Earth has a history of mass extinction events related to the impact of asteroids, there is nothing fairer than finding and cataloging objects that, someday, could pose risks to life here. The image above, for example, shows the orbits of more than a thousand potentially dangerous asteroids (PHO), which are so named because they travel in orbits that can approach the Earth at a distance of 7.5 million kilometers — equivalent to 19, 5 times the average distance between the Earth and the Moon (which is 384,000 kilometers).

In fact, small fragments of rock and ice hit our planet every day and rarely pose risks, so much so that some of them even cause interesting phenomena in the sky, such as meteor showers or passages so bright they look like fireballs. However, when we talk about asteroids 140 m in diameter, the situation is quite different, as they are capable of causing devastating events, such as tsunamis, if large fragments of them fall to the surface.

Of course, classifying them as PHO does not mean that any of them will hit us in the near future, but as not all of them have been discovered and the orbit of several has become unpredictable, it is important to follow them closely to refine and make more accurate predictions. the probabilities of impacts. 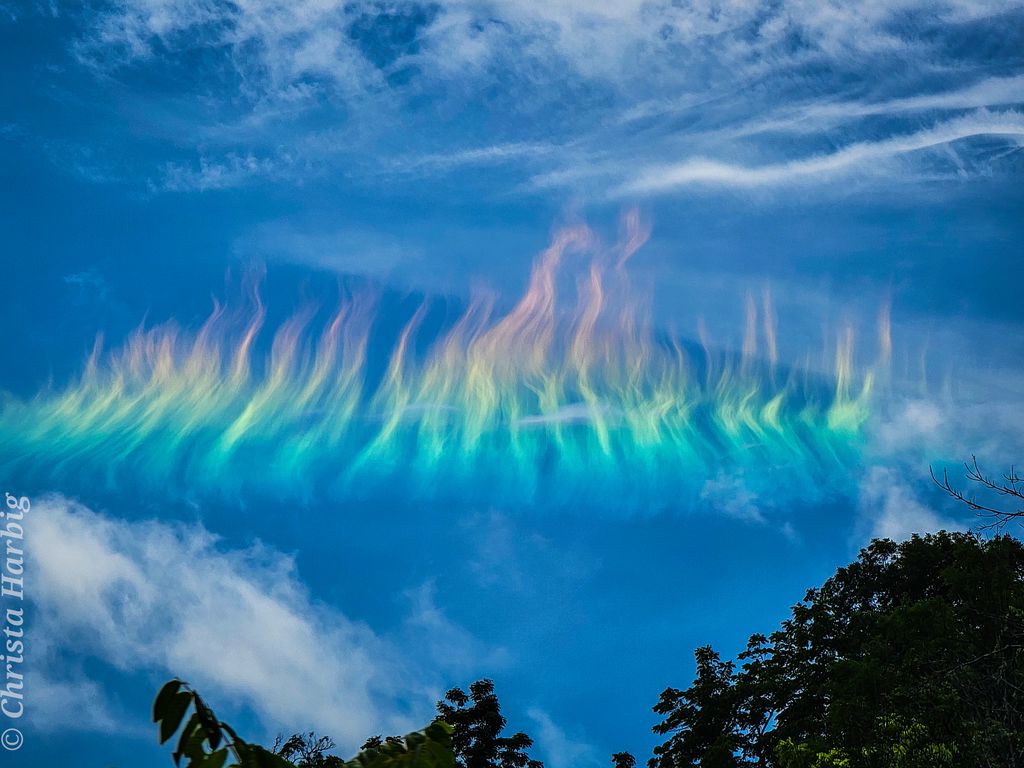 Yeah, these “colored flames” in the sky aren’t exactly what usually comes to mind when we think of a rainbow, are they? This phenomenon is known as the “circumhorizontal arc”, and is a colored halo that occurs parallel to the horizon when light passes through the side of an ice crystal, which acts as a prism. To observe it, you need the Sun at a position above 58° in the sky and cirrus clouds, which form at 10,000 m altitude and contain tiny ice crystals.

Put these two ingredients together, and with a little luck, you’ll see that if the cloud crystals are lined up horizontally, they act like tiny prisms that refract light and form this different rainbow. The rarity of the phenomenon depends mainly on the weather conditions and the latitude at which the observer is – for example, those who live in places in mid-latitudes are more likely to observe it during the height of summer. This photo was taken in the North Fork Mountains in the state of Virginia, United States.

The Moon is the biggest and brightest object in our night sky, and when we see it, we often notice yellowish or grayish tones. If we could improve these colors and make them more vibrant — as was done in the image above — we would be able to observe some important features of our natural satellite, which help to distinguish the different chemical compositions present in it. For example, areas in blue indicate places rich in titanium, while regions in orange and purple show places with a low presence of titanium and iron.

The region of the Sea of ​​Tranquility, known for the landing of the Apollo 11 mission, appears in the upper right corner of the image in blue, while white lines cut through the southern region, at Tycho crater, in the lower right corner. It is noteworthy that the strong colors of the photo are the result of a digital edition, and this is a composition made up of 272 individual photos. 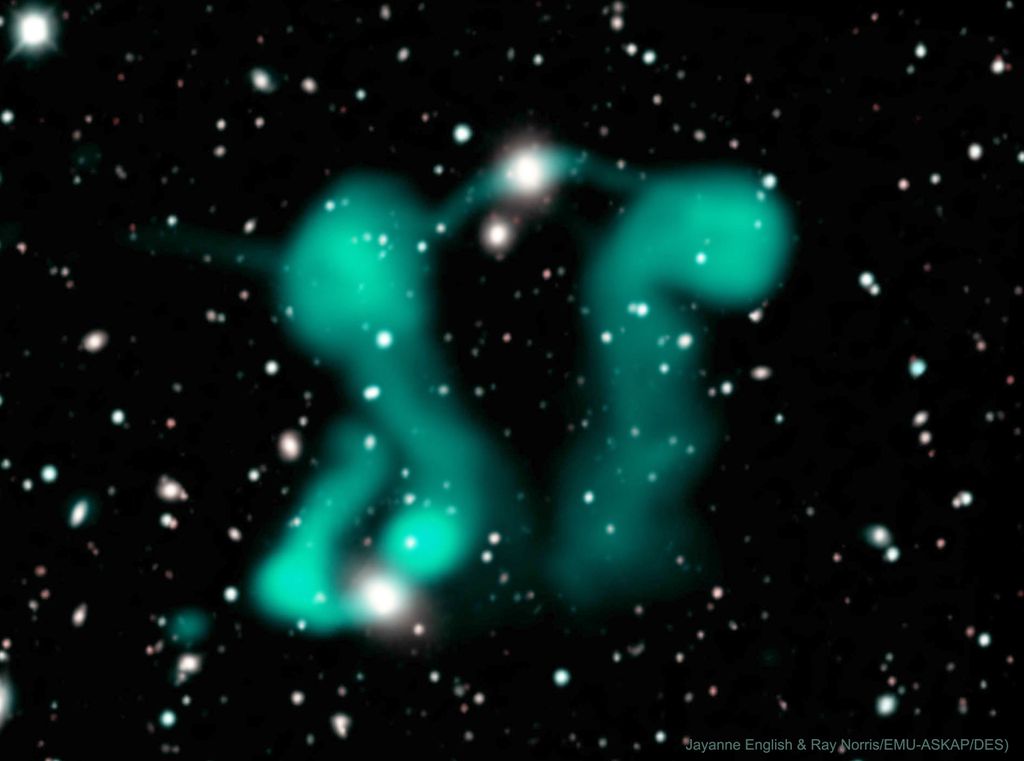 Observations performed with the Australian Square Kilometer Array Pathfinder (ASKAP) radio telescope to map the evolution of galaxies resulted in these greenish shapes, which appear to be dancing. What you see there are jets emitted by supermassive black holes. These objects have a mass that can reach billions of times that of the Sun and are present at the center of almost all large galaxies.

Other images taken before this study showed only amorphous bubbles, but comparisons of the relative amounts of energy emitted showed that the elongated and bright structures ultimately came from electron beams flowing around the magnetic field lines. By superimposing the data from radio waves to visible light, it was possible to confirm that these fluxes were coming from the centers of active galaxies, known to have a supermassive black hole at their center, “swallowing” matter “at full steam”. Generally, these regions produce straight jets, but those of these galaxies in the image can have a twisted shape due to the intergalactic winds.

Here, we have a beautiful pair of galaxies interacting with each other. The one at the bottom of the image, with a more defined structure, is the Whirlpool Galaxy. Discovered by Charles Messier in 1773 and cataloged as M51, this is a spiral galaxy formed by long paths of stars and dust, which compress hydrogen and form new stars. It is 31 million light-years from us and, as it is relatively close to Earth, it is a great object of study for astronomers looking to better understand the structure of classical spiral galaxies and the processes of star formation. In fact, the swirling arms may indicate another process in progress.

There are astronomers who consider the arms of the neighboring galaxy to be prominent in this way because of the effects of a close encounter with NGC 5195, the faintest, most diffused galaxy at the top of the image. It appears to “pull” one of the M51’s arms, and the tidal forces help start the formation of new stars.

At 1,300 light-years from Earth, in the constellation Cepheus, the Cepheus, are these beautiful cosmic clouds. It is the NGC 7023 nebula or the Iris Nebula, as it is better known. This is a reflection nebula, meaning the colors we see are the result of light scattering from the hot young star at its center. The filaments in the middle of the nebula appear to show a very faint reddish glow, which is the result of dust particles converting ultraviolet radiation into visible red light. In addition to these details, this telescopic image clearly shows the colors and shapes of the nebula, whose “petals” extend to approximately 6 light years.

In fact, observations of NGC 7023 in infrared light show that inside it are complex carbon molecules called “polycyclic aromatic hydrocarbons”. These compounds contain carbon and hydrogen, and astronomers believe they are some of the building blocks of life. Because these molecules often appear in hot, chaotic regions of space, some believe they may have withstood the extreme conditions present in early space.

Microsoft Edge will help you get discounts during a purchase

How to choose the right console for you

48% of Brazilians are in favor of adopting Bitcoin as a currency, according to a study

Tesla sets an absurd condition for using the autopilot