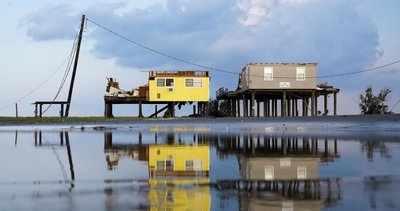 It was stated that while more than 800,000 subscribers could not be supplied with electricity in the state of Louisiana, which was hit by Hurricane Ida on August 29, the people formed long queues to buy food and gasoline.

The effects of Hurricane Ida, which hit the US state of Louisiana 5 days ago, continue. It was learned that more than 800,000 homes and businesses in the state still do not have electricity, and the people formed long queues at fuel stations.

It was stated that some supermarkets have limited the sale of water, bread, milk and other basic food products.

While there was no problem in the supply of products to the markets, it was stated that families with gasoline shortages stocked up on food in order to use their vehicles as little as possible. Thus, the shortage of fuel also affected basic food products.

PEOPLE ESCAPE FROM THE STATE WHERE LIFE STOP
According to gas station tracking service GasBuddy, 66 percent of stations in Baton Rouge and the city of New Orleans are free of gas.

The reason for the shortage of gasoline is the fact that the hurricane caused great destruction in the state, the people leaving the state and the increase in demand caused by gasoline-powered generators.

How did the Solar System form?

Xiaomi takes an important step in its electric car division