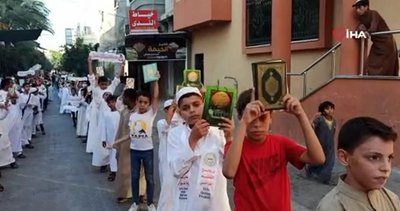 In the Nuseirat camp in the center of the Gaza Strip, a march was held with the participation of 700 Palestinian children to draw attention to the importance of families teaching their children the Quran.

Dar Al-Quran and Al-Sunnah organizations organized a large march in Nuseirat camp in the center of the Gaza Strip to draw attention to the importance of families teaching their children the Quran. Nearly 700 Palestinian children who memorized the whole or part of the Qur’an participated in the march. Starting in front of the Al-Farouq Mosque until reaching Salahaddin Street, children walked the streets of the Nuseirat Camp, carrying the Quran and banners.

In his speech, Abdul Rahman Al-Jamal, President of Dar Al-Quran and Al-Sunnah, thanked the participants of the march. Emphasizing that the children participating in the march will be the “liberation generation” that will liberate Masjid al-Aqsa, Al-Jamal said that thousands of children in the Gaza Strip are doing their best to memorize the Qur’an. Al-Jamal also urged parents to send their children to religious centers so that they can memorize the Holy Quran.

GTA 5: what has changed in the world since the first trailer