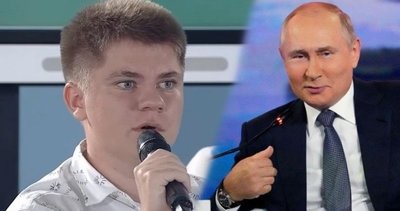 Russian President Vladimir Putin, who met with young people and students in Vladivostok, one of the far eastern regions of Russia, made statements regarding his opinions on a number of important issues.

When it comes to Russia’s past wars, a student named Nikanor Tolstoy, who participated in the program from the Russian city of Vorkuta, corrected Putin’s mistake when Putin referred to the “Great Northern War” as the “7 Years War”. Putin, on the other hand, nodded in approval of the student’s momentary exit.

The information war between the student and Putin suddenly became the agenda in Russia. Many social media users, on the other hand, while arguing that the student may encounter problems in school life, also appreciated the young student.

Upon the discussions in the country, the Kremlin made a statement regarding the agenda. Kremlin Spokesman Dmitry Peskov defended the student after the polemic, saying, “I don’t think anyone will cause trouble to such a successful boy. President Putin thinks this dialogue is a lesson for him. Do not forget that Vladimir Putin thanked the student for correcting his mistake. His friends, Tolstoy’s “He talks about being a successful student and everyone is sure he will have a great future.”

Also, Peskov noted that they guaranteed that Tolstoy would not have problems in school life.