Confirming the rumors, AMD announced in late July the RX 6600 XT, the motherboard of the company’s new GPU family dedicated to 1080P gaming. With Navi 23 chip and 8GB of GDDR6 VRAM, the launch showed attractive performance, although it is not the ideal solution that many expected given the prices, at least abroad, especially in the midst of the semiconductor crisis.

The company, however, should continue betting on the segment and may soon launch the RX 6600, a more modest model that had been found with the XT variant in drivers. The existence of this version is now reinforced by a new leak, courtesy of the VideoCardz website, which reveals the first custom card that uses the component.

Images of the Gigabyte Eagle model of Radeon RX 6600 were published by the portal, and show the complete look of the novelty, also confirming some of its specifications. In design, the GPU shouldn’t bring drastic changes compared to other members of the Eagle series, employing three fans in opposite directions to improve airflow, bluish plastic housing and dual slot form factor. 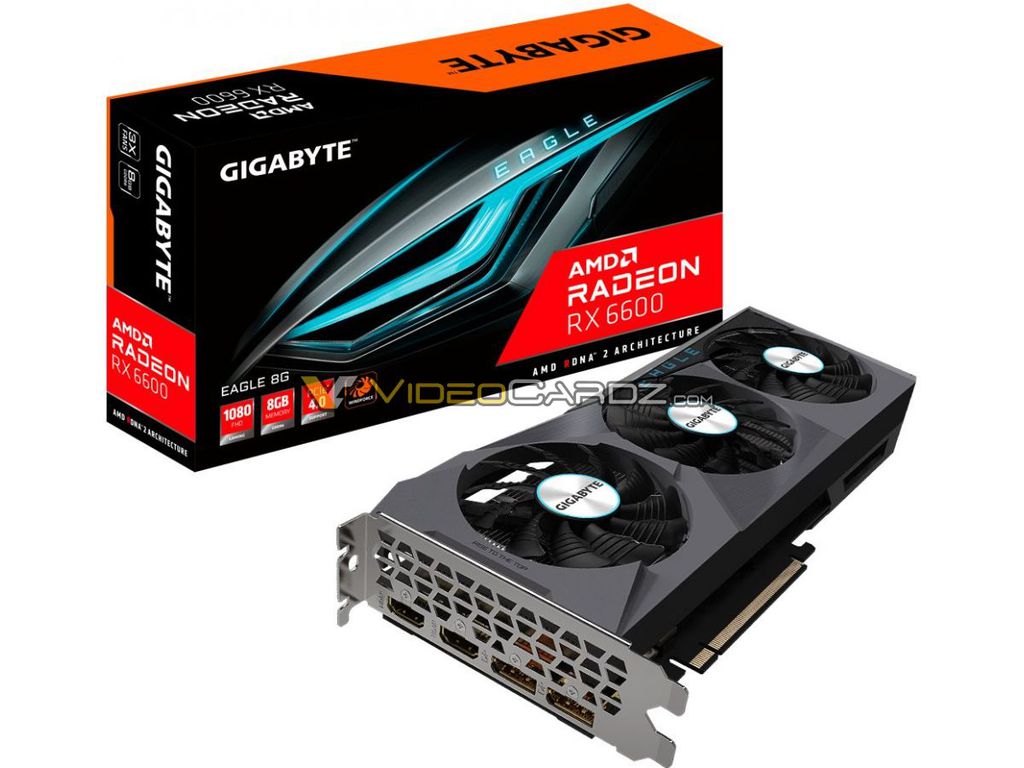 Other details indicated by the photos include the video connections, with two HDMI and two DisplayPort ports, the power system, which has only an 8-pin connector, as well as the 8 GB GDDR6 memory. Interestingly, it’s also possible to notice AMD’s focus on Full HD, which suggests that the solution shouldn’t suffer from very significant performance losses compared to the RX 6600 XT.

According to rumors, the novelty will hit the market equipped with a Navi 23 XL GPU, with 28 Computational Units (CUs), or 1,792 cores. In addition to the 8GB of RAM, running at 16Gbps with a width of 256GB/s, there would also be 32MB of Infinity Cache to improve bandwidth. There are no performance details, but tests done with other models based on the Navi 23 gave us a sense of what to expect.

Using the professional Radeon PRO W6600 board, which has specifications very close to those expected for the RX 6600, and making some adjustments in frequencies and memories, the website Igor’s Lab “emulated” AMD’s new input GPU and put it to face some Popular recent games like Watch Dogs: Legion and Metro Exodus Enhanced Edition.

Igor’s Lab tests with an “emulated” RX 6600 indicate that the novelty can be competitive with the RTX 3060 (Image: Playback/Igor’s LAB)

The results are encouraging, and show that the solution delivers very competitive performance with the RTX 3060, averaging around 4% lower than that of Nvidia’s competitor. Despite this, as was the case with other recent releases, the price will be the deciding factor for the RX 6600 to be an attractive option indeed.

After all, why will Olympic silver medalist Ravi Dahiya not participate in the World Wrestling Championship?